The Internet Thinks Beyonce Is Giving Birth Right Now (Or Yesterday, Or Tomorrow) At UCLA Medical 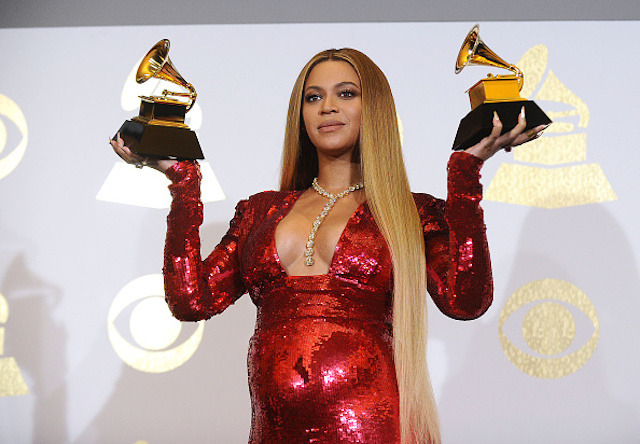 Beyonce at the 59th GRAMMY Awards in February 2017. (Photo by Jason LaVeris/Getty Images)

Rumors surfaced Tuesday that Beyonce had reportedly gone into labor with her twins, and the Internet has been losing its collective mind ever since, with everyone trying to one-up one another's hot takes. (The twins were already born! Yesterday! Last week! They've been here this whole time! They're applying to Harvard in the fall!)

.@Beyonce we know you done gave birth sis, now pass up them pictures!!!!!!!! I need to see my niece and nephew! pic.twitter.com/QlZcyBK5Ox

While there's no concrete evidence yet to suggest that Blue Ivy Carter's siblings have come into the world, there's plenty of excitement building in Los Angeles, with Vogue UK noting that heavy security was spotted outside the UCLA Medical Ward, and the International Business Times reporting that fans think Beyonce is "hiding her babies."

Beyoncé probably paid the hospital to act like she in labor, while she celebrating the twins 1st birthday pic.twitter.com/KP6nAXlSeg

The Daily Mail reports that Beyonce's husband Jay-Z had been seen leaving his Beverly Hills mansion (although it's hard to see this as conclusive proof that Beyonce is indeed in labor, since presumably Jay-Z also exits his home on days when his wife isn't giving birth.) In the absence of any hard news, Twitter users are taking on the mantle of investigative journalism, checking in via phone with UCLA Medical:

So I called UCLA Med Center to see if Beyoncé was giving birth and they told me ... pic.twitter.com/EnPXWlhdw9

LAist also reached out to the UCLA Medical maternity ward for comment, but unsurprisingly, they declined to release patient information to us, or even confirm which 22-time Grammy-winning pregnant musicians may or may not be UCLA Medical patients. (This reporter considered showing up at the hospital, falsely identifying herself as "pregnant and extremely rich", and demanding to see the fanciest birthing room in the place, but ultimately decided it might violate journalistic ethics.)

We'll make sure to keep you updated as soon as we can confirm that the blessed event has occurred; for now, if you're really desperate for Beyonce birth content, take a look at this 2012 photo tour of the New York hospital room in which Beyonce gave birth to Blue Ivy.