Enjoy Figs, Grapes, And Lemonade Berries At This 5-Acre Park In Culver City 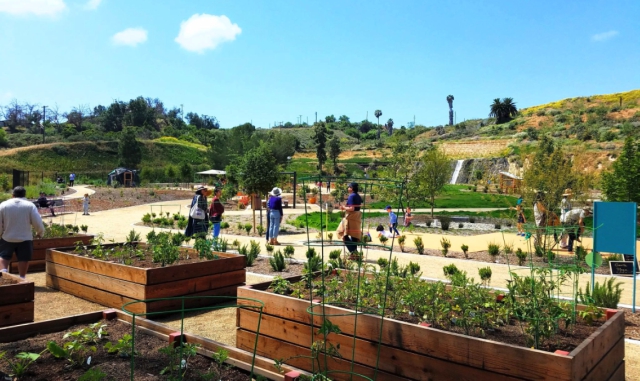 A new park in Culver City near the Baldwin Hills border offers Angelenos the opportunity to pick their own fruit. The five-acre Stoneview Nature Center, which opened in April, focuses "on health, art and the environment" and hosts a variety of fruit trees planted by local art collective Fallen Fruit.

Fallen Fruit was founded in 2004 by artists David Burns, Matias Viegener and Austin Young, and has been continued by Burns and Young since 2013. The group began mapping fruit-bearing trees that grow on or over public property so that people could pick the produce. In the years since, the collaboration has expanded to include serialized public projects and site-specific installations and happenings in various cities around the world, according to the Fallen Fruit website. This includes Del Aire Fruit Park, which opened in El Segundo in 2013—the space was created by Fallen Fruit in collaboration with various county officials. The Los Angeles County Department of Parks and Recreation oversees the Stoneview Nature Center as well.

"We were interested in how Los Angeles is a driving city, and we felt really disconnected from our neighborhood and community and thought that a map [of fruit trees] would help people meet their neighbors," Young told NPR of the origins of their collaborative. As for the trees Fallen Fruit has planted, Young added, "We think of it as social sculpture. ...It's an artwork that in a real way changes people's relationship to space."

"We got wind of Fallen Fruit after their work on Del Aire," David McNeill, executive officer of the Baldwin Hills Conservancy, the state agency that helped fund the Stoneview Nature Center, told LAist. "And then they did some work along the Stocker Corridor."

"We planted the fruit as a rainbow fruit orchard—it’s arranged in order of the color spectrum," Fallen Fruit wrote in a response to LAist. "Lemons, oranges, pomegranates, etc. We thought about how each fruit contributed to the culture and economy of California. There are some native fruits in the park like Lemonade Berries, but most fruits that we eat come from somewhere else in the world. The Orange, which originated in china, took off when miners up north needed citrus to prevent scurvy and created the 'Second Gold Rush.'"

As McNeill told LAist, choosing the specific species for the park was a back-and-forth between Fallen Fruit, the Conservancy, and a few other stakeholders. "We tried to keep the species consistent with the California story—every piece of nature has a story. So, for oranges, we got Valencia orange. For avocados, we used a native species."

As McNeill continued, the fruit trees are regarded as an art installation, but still fit into the park's goal of healthy mind, healthy body, healthy environment, healthy watershed.

"This is an urban sanctuary," Shawna Joplin, superintendent of the park told NPR. "It's passive recreation. You can come here to do some birdwatching and take fruit home with you."

As for how much fruit you can take home with you? "We'll have to figure that out," McNeill told LAist. "We don't have a governance set up yet, to be honest. But it hasn't become an issue yet, [at Stoneview] or at Stocker."

"It’s not a place to harvest fruit like a commercial orchard," Burns told LAist. "When the fruit is ripe, taste it. Share it with a friend. Leave some for next person to enjoy. And maybe continue to walk to the beach on the Park to Playa trail.”

Stoneview Nature Center is located at 5950 Stonveview Drive in Culver City. It's open seven days a week from 8 a.m. to 5 p.m.