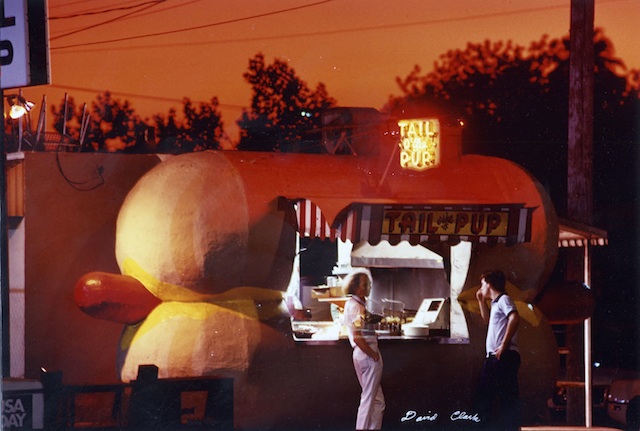 Think hot dogs in L.A., and your mind turns to Pink's. For a large chuck of the 20th century, however, Tail o’ the Pup was seen as a formidable challenger to the throne.

Established in 1946, Tail o’ the Pup was as famous for its stand as it was for its food; the space was designed as an outsized hot dog with a generous slathering of mustard. The stand was eye-catching, no doubt, and thusly featured in movies such as Brian De Palma's 1984 thriller Body Double and Steve Martin's 1991 comedy L.A. Story, among others.

As noted at Los Angeles Magazine, the 17-feet-wide by 8-feet-tall concrete hot dog was originally located on the corner of La Cienega and Beverly Boulevards. It moved to a new spot on San Vicente Boulevard in the 1980s, according to the L.A. Times, and was later put in a storage unit in Torrance in 2005. There were recent rumblings that the stand would make a comeback, but plans were repeatedly hampered by city building codes, which meant that the stand would be left idle in a Lake Elsinore storage space for some time.

Now, the stand is coming back into the spotlight— as reported at Los Angeles Magazine, the stand will head to the Valley Relics Museum in Chatsworth. You could hardly think of a more perfect match: the museum has a knack for collecting the minutia of local pop culture, such as the stand from Henry's Tacos, and a sculpture of the once-ubiquitous Pep Boys.

According to Tommy Gelinas, curator and founder of Valley Relics, the stand was donated to the museum by Jay and Nicole Miller (Jay is the grandson of Eddie Blake, who bought the stand from the original owners in 1970). "Nicole called and said 'We want to donate it,' and I said, 'absolutely,'" Gelinas told LAist. "I think that L.A. as a whole and the San Fernando Valley has lost so much history. It's an honor to help preserve some of it." 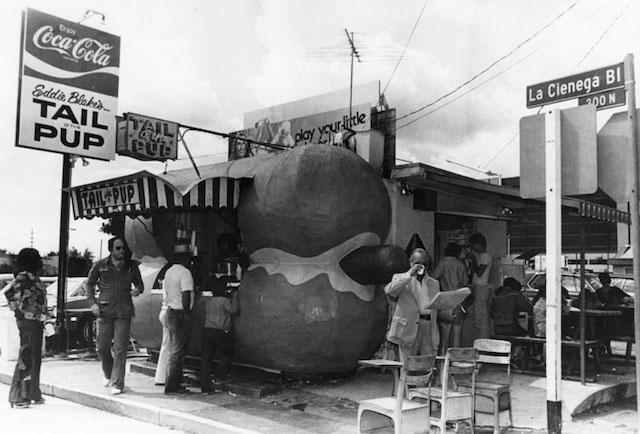 Gelinas informed us that there'll be a "homecoming" event taking place this Thursday, June 15, as the stand will be shipped to North Hollywood for some refurbishing in preparation for its debut at the museum. The festivities will take place at The Print Lab (which Gelinas owns), where the stand will arrive at around 3 p.m. You can show up to watch as the stand makes its journey to the space; Gelinas said that you'll be able to take pictures with the stand, and even touch it to catch some of those magical, hot dog vibes.

After the event, the stand will sit in The Print Lab for about a month as it gets a touch-up, and then it'll be carted off to Valley Relics Museum.

We imagine that the stand could become the centerpiece in the museum's collection. The spread there is already impressive, but no icon has been so ingrained in our imaginations as the Tail o’ the Pup. "I think what makes it so special is that it was part of that old Programmatic Architecture style that doesn't exist anymore," Nicole Miller told LAist. "And I think people just like the nostalgia of it. It brings people back to a time when things were simpler."

As for the actual hot dogs, Tail o' the Pup had a resurgence as a food truck in 2016. They're now looking at a brick and mortar in the future, with possible locations in Hollywood, Santa Barbara, and Venice Beach, according to a Facebook post.