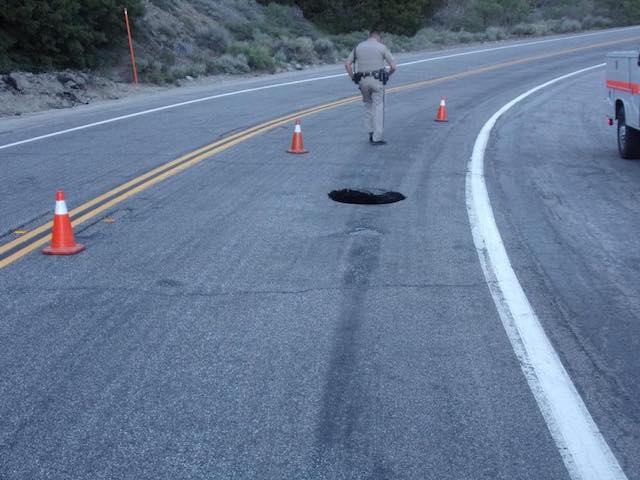 The sinkhole on State Route 2. (Photo via the Forest Service)

A sinkhole was discovered on Angeles Crest Highway (State Route 2) on Thursday, prompting the closure of a 14 mile stretch of the road extending from Blue Ridge Road to Islip Saddle.

The sinkhole appeared west of the Grassy Hollow Visitors Center. Highway 2 cuts through the San Gabriel Mountains and is popular with hikers and bikers on their way to trailheads. The section of the road is normally closed during winter months, according to ABC.

The 10-foot wide sinkhole opens into a cavern much larger than the hole itself, according to the U.S. Forest Service.
CalTrans said in a statement the void beneath the hole might "encroach into the westbound lanes," prompting the closure of the whole road. Once emergency repairs have been completed, it may take another 30 days of work for the route to be re-opened to motorists. Repairs include solidifying the walls, replacing drain pipes, filling the void, and re-paving the road.

Caltrans requests motorists to steer clear of the area and use alternate routes.