Cal State LA student and immigrant rights activist Claudia Rueda was released from detention in San Diego on Friday morning, three weeks after being detained by Customs and Border Patrol agents in Boyle Heights. An immigration judge released Rueda on her own recognizance after indicating that Immigration and Customs Enforcement's decision to hold her without bond was "unduly severe," according to a statement from the Immigrant Youth Coalition. Despite her release today, the 22-year-old still potentially faces deportation. Her attorney has filed a request with ICE for "prosecutorial discretion," and Rueda's supporters are urging the agency to grant the request and move to drop the deportation case against her.

Rueda, who has lived in the U.S. since she was six, is a prominent immigrant rights activist who led protests after her mother Teresa Vidal-Jaime was detained in April. Many community members and friends saw Rueda's arrest as retribution for her activism. "We believe it's retaliation, but it's hard to prove that," Claudia Bautista, an organizer with NDLON and friend of Rueda's, told LAist in May. "Knowing how big of a role she played for her mom, all the interviews that she did and all the attention that her mom's case got, it definitely looks suspicious," Bautista said.

Rueda's mother Vidal-Jaime was picked up by federal authorities during a large-scale drug bust at the Boyle Heights apartment complex where she lives; she was later cleared of any involvement, but still faces potential deportation.

Rueda was arrested by CBP agents just days after her mother was released on bond. The Immigrant Youth Coalition alleged in a statement that the timing of Rueda's detention "raise[d] the troubling specter of retaliation." Rueda's arrest garnered a flurry of attention on social media, and spurred numerous protests in both Los Angeles and San Diego. 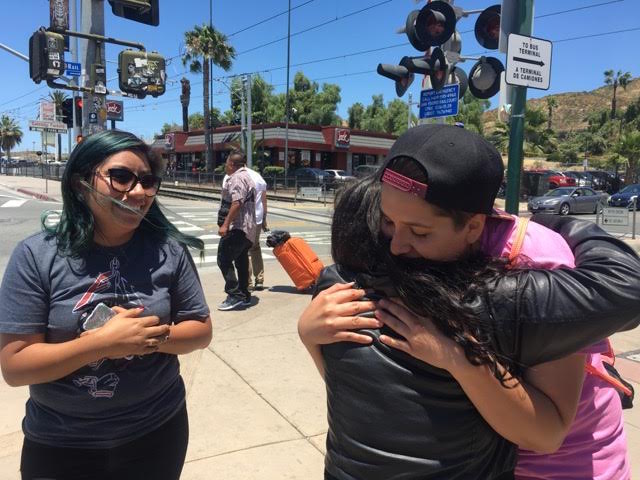 In an op-ed published in the Los Angeles Times on Thursday, two of Rueda's professors at Cal State LA characterized Rueda as "the face of immigration enforcement under the Trump administration."

"Under current executive guidelines, any immigrant suspected of a crime, even if never arrested, charged, or convicted, has become a priority for deportation. Basic due process, such as the right to know the charges and evidence against you, is absent in the immigration system. This policy has led to a 32% increase in immigrant detentions in the first three months of Trump’s presidency compared with the same time last year, and a 100% increase in the detention of people with no criminal record or with only minor traffic infractions," Cal State LA's Beth Baker and Alejandra Marchevsky wrote in the editorial.