Where To Find The Best Russian Food In L.A.

It's a tough time to be a Russian expat in America. Public opinion of Russia in the U.S. is at a Cold War-era low, and here in Los Angeles, West Hollywood's once-flourishing Russian immigrant population is shrinking by the day. Nonetheless, the best of Russian-expat culture can still be found in L.A.'s various Russian restaurants, bars and delis. I spent my childhood in Moscow, gorging on endless blinis with extra smetana (sour cream), so I feel reasonably confident bringing you this list of Russian cuisine in Los Angeles that's good enough to make your babushka cry. (Although, why would you want to make your babushka cry? What kind of monster are you?) 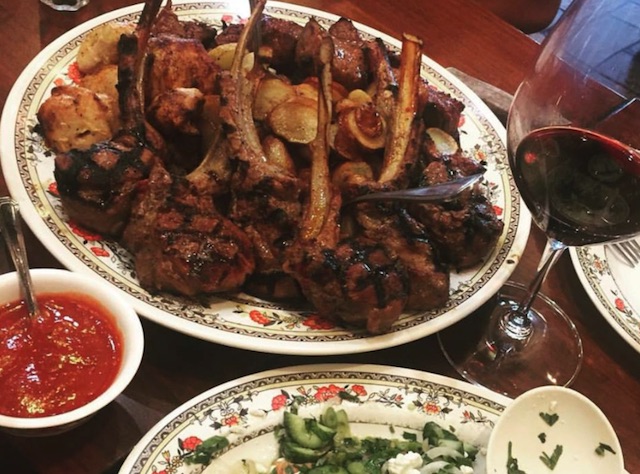 Lambchops at Traktir. (Photo via Traktir/Facebook)

The closure of Jonathan Gold's beloved Mari Vanna in Beverly Hills left a major opening in L.A.'s Russian food scene. Enter Traktir, a sprawling, red-awninged tavern on Santa Monica Boulebard that dishes up authentic Russian zakuski (appetizers) alongside hearty Ukrainian, Kazakh and Polish entrees. If you're in the mood for a midday feast, Traktir offers an unbeatable weekday lunch special of your choice of lula kebab or chicken/pork shashlik, plus soup, for $17.95. That might not sound like much of a deal, but Traktir's soup is no watery appetizer—the kharcho, a Georgian lamb soup with rice, packs a major punch—it's the perfect thing to sober you up after an extra-strong Baltika 9 beer (or three.) 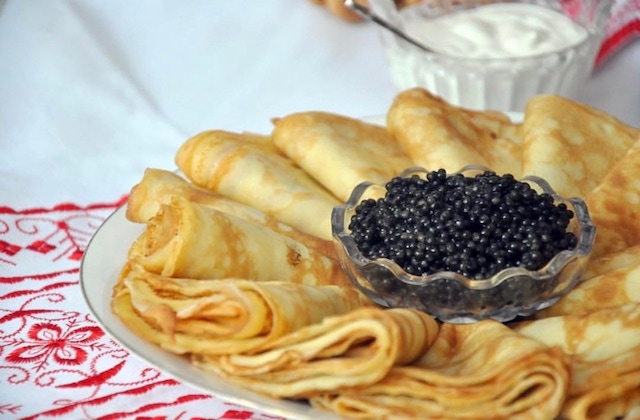 Absolute Caviar's shop on Sunset Boulevard has been open since 2000, which is impressive when you consider that in times of economic strife, luxury fish eggs are generally the first thing to get crossed off the grocery list—Beverly Hills Caviar's much-vaunted caviar vending machines didn't survive past 2012. Nonetheless, Absolute Caviar serves up a sumptuous array to the remaining caviar aficionados in Beverly Hills; yes, much of the shop's fare is ludicrously expensive (particularly the $800-a-pound "Ossetra" sturgeon), but Absolute Caviar also offers a reasonably priced selection of smoked mackerel and salmon belly. And hey, it never hurts to know where the finest caviar in the city is, just in case a Russian oligarch stops by for dinner. 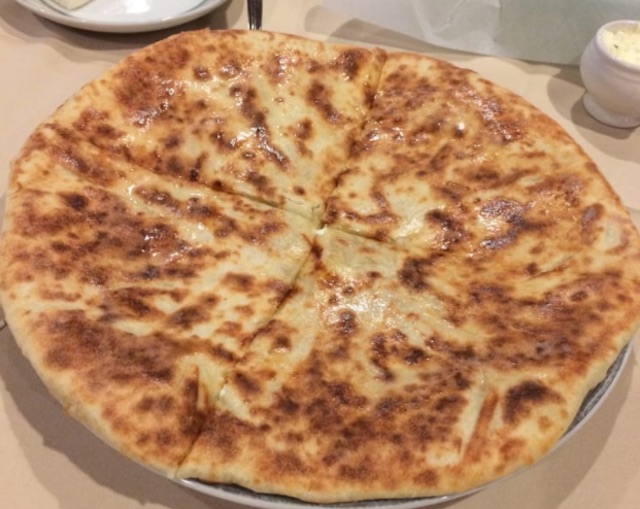 Like so many of L.A.'s hidden gems, Glendale's Old Village is nestled in a strip mall that betrays no hint of the culinary delights in store. Old Village is an authentic Georgian-Russian restaurant, which means they serve khachapuri. If you're familiar with Georgian food, you're already salivating. If you're not familiar, allow me to let you in on a beautiful secret; Georgian khachapuri is baked flat bread stuffed with melted white cheese. In other words, it's basically Domino's Cheesy Bread, but infinitely better—if you ask nicely, Old Village might even crack a fried egg on top, elevating the whole doughy, cheesy mess to new heights of perfection. Pair your khachapuri with an overflowing glass of Georgian wine, and you might start questioning why you ever eat anywhere else. 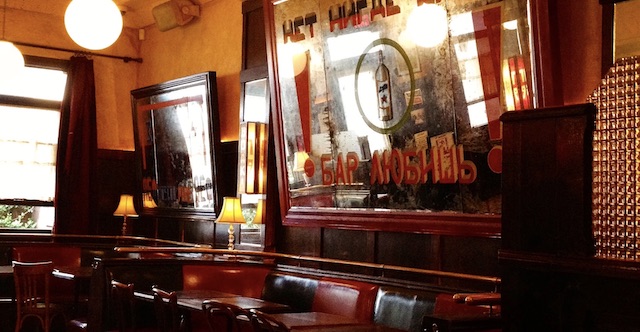 Okay, we're cheating a bit on this one—Bar Lubitsch doesn't serve food, but the West Hollywood vodka bar offers a Russian-themed cocktail menu that merits inclusion on this list nonetheless. The "Molotov Cocktail"—Zubrowka Bison Grass Vodka and apple juice, set alight—is a fiery crowd-pleaser, but it can't compare to the "Rodchenko," a Ketel One, gin and Lilllet concoction whose name pays tribute to one of Russia's most famous artists: Alexander Rodchenko. L.A. history nerds will appreciate the "Garden of Alla," a mixture of vodka, Cointreau and cranberry juice named for Russian expat-turned-Hollywood-starlet Alla Nazimova, whose Garden of Allah Hotel served as a playground for luminaries from Greta Garbo to F. Scott Fitzgerald. Also, Russian history nerds will appreciate the Soviet-kitsch vibe of Bar Lubitsch's decor.

This West Hollywood grocery store, whose name translates to "Dream," sells some of the most authentic Russian deli food you'll find outside of Moscow. The deli's authentically cranky proprietors dole out generous portions of stuffed cabbage and tvorog (Russian farmers' cheese, not for the faint of heart), and Mechta boasts an impressive stock of Russian herbal teas. If you want to add some Slavic flair to your next at-home pasta night, grab a few packages of Mechta's frozen pelmeni—meat dumplings that are essentially the Russian version of ravioli. While you're there, stock up on authentic Soviet candy like Alyonka chocolate (you know, the kind with the little girl on the package.) 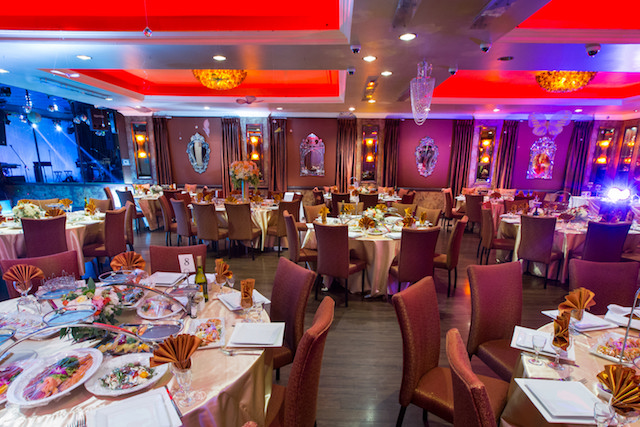 If you want to experience a traditional Russian evening, go no further than Maxim Restaurant in Beverly Grove. Fair warning—Maxim is an experience indeed, with lavish, wonderfully tacky crystal chandeliers, disco balls, and trippy neon lighting straight out of the '80s (for expat Russians of a certain age and mindset, 1980s nostalgia will never go out of style.) An in-house band plays Russian and American music, so you may not be able to escape Maxim without dancing. If all of this sounds vaguely migraine-inducing to you, you might be appeased by Maxim's traditional Russian menu, which boasts smoked fish platters, caviars, blinis and weirdly refreshing Russian salad (feta cheese with cucumber and tomato.) 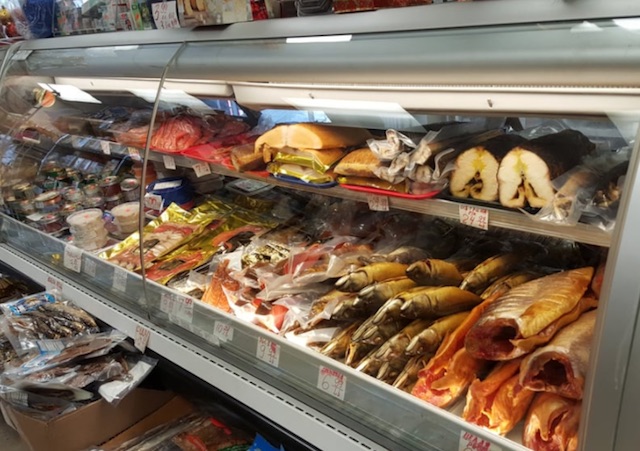 We need to talk about kvass. This beloved Russian drink is made with dark rye bread, malt and/or barley extract and yeast, and it has a sour, beery taste that generally proves polarizing; you either love kvass or you hate it. Valley Village's tiny Odessa Grocery is one of just a handful of Russian delis in L.A. that stocks the fermented beverage, but if you're a true kvass addict, you'll bend heaven and earth to seek it out. 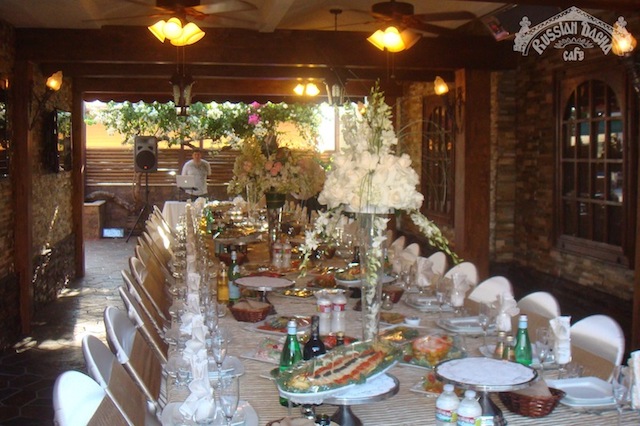 Nestled in Valley Village, Urban Dacha is outside the boundaries of West Hollywood's Russian-cuisine enclave. The restaurant's wide patio is meant to evoke the summery outdoor feel of a Russian dacha, or country cottage (which is a lot easier to pull off in temperate Los Angeles than in Russia itself, I might add.) All the usual suspects—sturgeon, blintzes, pickled vegetables, et cetera—are on the a la carte menu at Urban Dacha, and the $40 prix-fixe brunch menu offers all-you-can-eat hot and cold appetizers, plus a feast of main-course kebabs. For a proper Russian lunch, fix your kebab with a side of grechka (buckwheat.) Grechka is something of an acquired taste, but it complements grilled beef, pickled herring and sour cream quite nicely.

The beet latte at Drink Houz in Historic Filipinotown. No, the organic juicery isn't technically a Russian eatery, but as someone who spent her Russian childhood being forced to choke down a bowl of borscht with every meal, I can confirm that it doesn't get more authentically Russian than a steaming mugful of warm beet juice (it's better than it sounds).