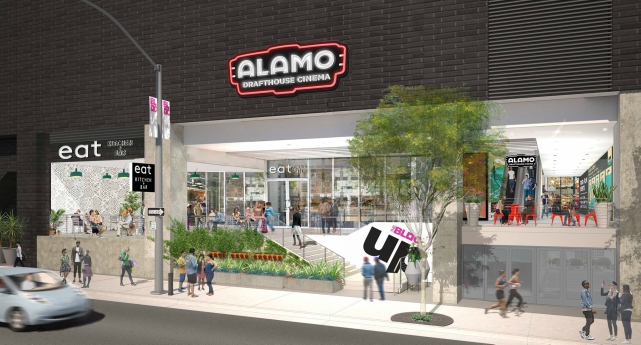 After a three-year wait, Alamo Drafthouse has made their expansion to Los Angeles official. The Texas-based beer hall-cum-movie theater has signed a lease, and will be opening sometime next year at The Bloc in downtown L.A.

"When we announced seven years ago that we would be embarking upon a plan of nationwide expansion, my primary goal was to open a theater in Los Angeles," Tim League, founder and CEO of Alamo Drafthouse, said in a press release. ""After many years of exhaustive searching and planning, we feel we have found the perfect home at The Bloc. Building a new audience for foreign language films, documentaries and independent movies is core to the Alamo brand, and this flagship theater will be ground zero for that effort."

The Bloc has been undergoing an intensive redevelopment over the last few years, as the once enclosed mall has been transformed into an outdoor center. However, the transformation has not been without snags as some high-profile tenants (see: Davio's Northern Italian Steakhouse) have pulled their commitment to the space.

“With the addition of Alamo Drafthouse and our positive leasing momentum, space will soon be a scarce commodity at the Bloc,” said Wayne Ratkovich, president of the Ratkovich Company, which has reportedly spent $250 million on the Bloc's redevelopment, notes the Los Angeles Times.

According to the press release, the theater will have 12 screens, be equipped for 3-D movies, a serve a wide range of food and drink options.

LAist reached out to the Ratkovich Company, but they were unavailable for immediate comment.