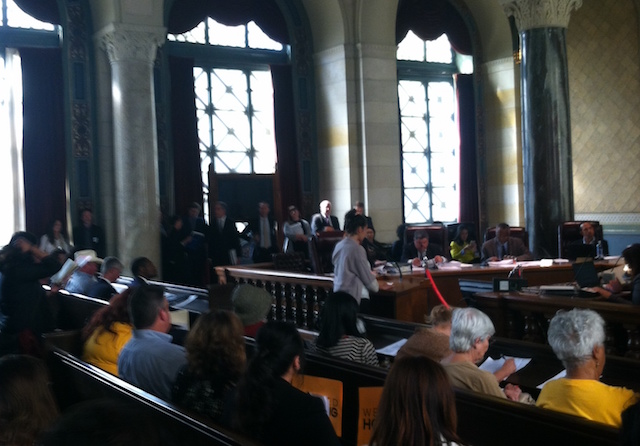 After an hours-long, heated hearing on Tuesday, a City Council committee voted to delay their decision on a proposal to fund affordable housing through a fee on developers.

Los Angeles is inarguably in the throes of an affordable housing crisis; the question that remains is how the city—and its residents—will deal with it. The plan for a so-called affordable housing linkage fee has been championed by Mayor Eric Garcetti, who first introduced the idea in October 2015. The proposal made its way to council's Planning and Land Use Management Committee (PLUM) after being approved by the city's Planning Commission in February; it needs PLUM approval before it can be voted on the full City Council. Citing the need for more information, the planning committee decided to delay their decision for several months and will likely return to the matter in late July or August.

A linkage fee, for those who are unfamiliar with the term, is not too far off from what it sounds like: by instituting a small fee on new developments, the city can "link" the production of affordable housing to other new construction. In this case, the fees (with some exemptions) would be levied on developers building commercial and market-rate residential structures; the money collected would then be used to build separate affordable housing. Under the proposed ordinance, the money collected from this would go into a city-run trust fund that would then be used to help build affordable housing for lower-income residents. The fees could generate an estimated $75 million to $92 million each year, according to Curbed LA.

The Daily News reports that Garcetti mentioned the linkage fee in his State of the City address in April, where he implored the council to pass the proposal "now."

Los Angeles currently collects far fewer fees from developers than comparable West Coast cities, according to a report issued last year by the City Controller. A number of major cities already have a version of the affordable housing linkage fee in place, including Boston, San Diego, San Francisco and Seattle. Closer afield, the cities of Santa Monica, Pasadena and West Hollywood already require developers to have some form of a linkage fee.

"[The proposal] essentially says, 'If you choose to build a building here and you're not falling under one of the host of exemptions, what we expect from you is to pay a certain amount of money into this fee,'" Alan Greenlee, the Executive Director of the Southern California Association of Non Profit Housing (SCANPH), told LAist. "And the justification for that fee is built into what's called the [Los Angeles Affordable Housing Linkage Fee] Nexus Study, which was conducted by the city and essentially says that development—both commercial and residential—generates need for jobs, and the generation of the need for those jobs generates the need for housing that's affordable for the people doing those jobs."

Support the Linkage Fee at this Tuesday's PLUM Hearing! pic.twitter.com/wxuKUjwLtH

The linkage fee is overwhelmingly supported by affordable housing groups, as well as by a broad coalition of community and religious groups. Business interests, however, have largely opposed the proposal, arguing that levying fees on developers will stymie the overall production of new housing. Los Angeles Area Chamber of Commerce President and CEO Gary Toebben told LAist in an email that the chamber opposes the proposal because it "works against our goal of creating more affordable workforce housing for middle-income Angelenos."

"It will also have a very negative impact on commercial and industrial projects that would not face this extra fee in other cities and states," Toebben continued. "We need to build more housing and more affordable housing, but this is a solution that will raise prices, not lower them, on the majority of for-sale and for-rent housing in Los Angeles."

SCANPH's Alan Greenlee countered that viewpoint. "If you look at other markets in the country where there's some sort of affordable housing linkage fee, there's been no slow down in the development of market-rate housing," he said. "There's no experiential data out there that suggests that this will slow down the real estate market in Los Angeles."

Yesterday's committee hearing, which included more than two hours of public comment, was nothing short of heated, according to multiple attendees. The non-profit Alliance for Community Transit, which was advocating for the proposal, reported on Twitter that over 200 supporters turned out, with many stuck outside of the limited-capacity hearing room.

"Voters put their trust in us by passing Measure H and Proposition HHH, to deliver the housing and services that people on the streets desperately need," Garcetti said in a statement last week. "But we can only solve this crisis by deepening our investment in affordable housing. That’s why we must adopt a linkage fee to help us more than double our production of affordable housing. There are lives on the line, and we must press relentlessly forward until every Angeleno has a safe place to sleep at night.”