The Only Surviving Founder Of L.A. Pride Talks About The March's History 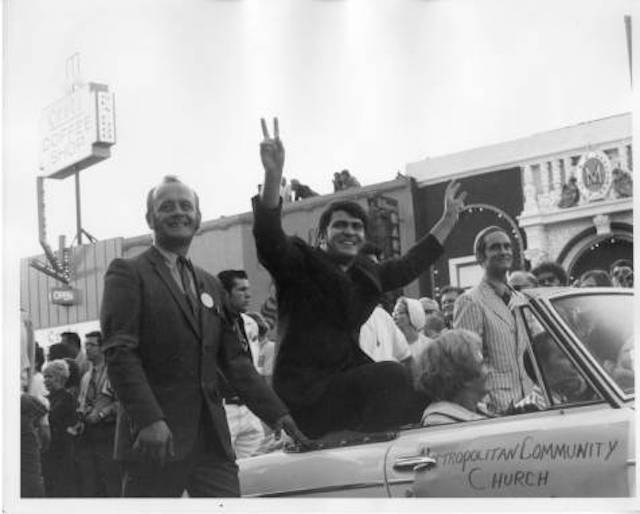 The year was 1970: gays faced hate even in places that are now L.A.’s most vibrant gay-borhoods. Police entrapment was common, and undercover vice squads were an immutable fact of queer life. The rumblings of rebellion had started at the Black Cat in Silver Lake on February 11, 1967. A less celebrated moment in L.A.’s history of queer resistance would take place the following summer, still a full 10 months before New York’s Stonewall Inn riot.

The moment was August 17, 1968. Lee Glaze, owner of a bar called the Patch on Pacific Coast Highway in Wilmington, led a nonviolent rebellion against Los Angeles police harassment following the arrest of two of his patrons. Glaze, joined by his friend and ally Rev. Troy Perry, stormed LAPD’s Harbor Station toting swollen bouquets. The flower-power militia's actions put another crack in the gay ceiling that August night. 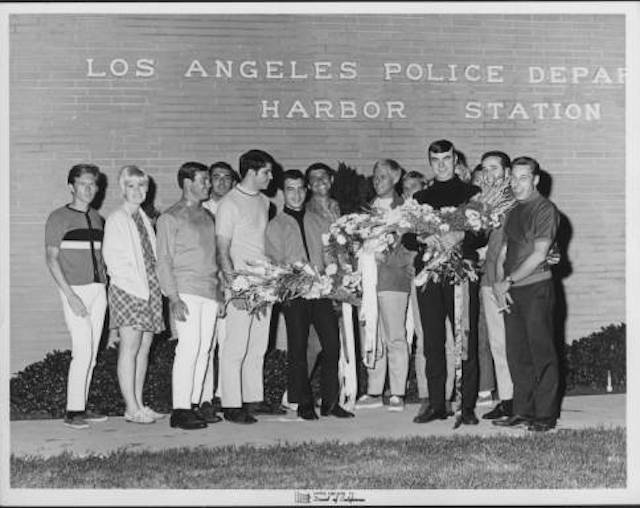 After a police raid of The Patch bar resulted in the detention of patrons, Lee Glaze, the bar owner, bought flowers and led a group to the Los Angeles Police Station Harbor Station to await the release of his patrons. Troy Perry stands fifth from left, Lee Glaze, eighth from left. 1968. (Photo courtesy of the USC Digital Library, One Archives)

Eventually, Rev. Troy Perry, along with Morris Kight and Rev. Bob Humphries, would conceive of the world’s first gay pride parade, which was held on June 28, 1970 in Hollywood. Kight passed away in 2003 and Humphries died in 2002; Perry is the only surviving founder of Christopher Street West, the nonprofit that organizes the annual pride march. Perry also founded the Metropolitan Community Churches, which fully embrace and welcome LGBT people and now have 222 member congregations in 37 countries.

With L.A. Pride becoming the Resist March, we talked with the Rev. Troy Perry to hear how it all began. Meet one of the godfathers of gay liberation.

What sparked your activism?
I was down in Wilmington at The Patch. It was the first gay dance bar. I took a date of mine Tony Valdez. We went in and we were having the best time. All at once my date goes over to the bar area and Bill, an older gay man, reached over as Tony was bringing my beer back and slapped him on the butt. [Tony and Bill] were arrested for lewd and lascivious conduct by the three vice officers who were [undercover] in the bar.

How did everyone react?
The Patch’s owner, Lee Glaze, known as the “Blond Darling”, started shouting “Is there a florist here I want to buy every flower you’ve got.” We walked into LAPD’s Harbor Station, and when Lee approached the desk officer on duty, he announced, “We’re here to get our sisters out!” “What are your sisters’ names?” asked the officer. “Tony Valdez and Bill Hasting” said Lee. It scared this cop to death! I founded the Metropolitan Community Church because of Tony’s arrest.

Who inspired your activism?
I’m a Southerner and seeing what [Dr. Martin Luther King, Jr.] was doing with African Americans, he became my mentor. My mother taught me to be good to people. Tony Valdez, who was arrested at the Patch, was a Mexican-American. The first [same-sex] couple I married at MCC was a Hispanic couple in December 1968. I wasn't going to perform marriages for somebody you met last night. But if you were serious, come see me. One of them was dressed in a little female wedding outfit. It didn't matter. I married them in my home. It was just the three of us. They didn't even bring witnesses.

Do you remember your first demonstration? Were you afraid?
My first demonstration was on March 9, 1969 down at the Dover Hotel on Skid Row. That didn't frighten me. I went in my full regalia to lay flowers for Howard Efland who had been beaten to death by police. I wasn’t afraid of a fistfight. If push came to shove I could handle myself. For me the military was finishing school. Once the military tells you over and over again that you could die you get to that point of “well, if death is the 800-pound gorilla in the room...” We’re a deeply spiritual people. You can’t go through the fire and come out the other side not caring. Even if they kill us we believe in life eternal.

Where else did gays and lesbians go to meet back then?
Huntington Park, where I founded MCC, had two gay bars. Our Chief of Police in the little town of Huntington Park had a lesbian sister as it turned out. He would not even let his officers come in the gay bar. There was a hall there where the big [Gay Girl Riding Club] drag ball took place every year, purposefully because the LAPD could not make any arrests that were out of their jurisdiction. We had a lesbian bartender and if anyone came in trying to cause trouble she took a pool cue and would wait outside with the person for the cops to come pick them up. They didn't come into the bar. It was called the Islander. The other bar was called the Little Tokyo.

Was Hollywood a popular spot with the gay community?
On one end of Hollywood Boulevard was Pagola’s restaurant. It was a meeting place for gay men. We would walk from the Hollywood Freeway almost down to Hollywood and Vine to the next gay restaurant, the Gold Cup [a coffee shop on the corner of Wilcox & Hollywood Blvd]. In between of course could be other gay men, sex workers, or the hustlers who would hang around in front of those areas. The bar at that time was called the Red Raven. It scared me to death. I didn't know what cruising was, that’s how dumb I was. I come from a blue-collar family. It was dark inside, with red lights and signs that said “don’t talk to strangers”. I wondered how I would ever meet anyone if I didn't talk to them? It was the only time I went there because it frightened me.

Anywhere else good?
I’d been to a private bar called Canyon Club in Topanga Canyon where you went to the front bar and you buzzed. They had a window and they would decide if you were gay or not. An ex-vice officer of the LAPD opened the bar because he had a gay nephew who had invited me. Then they buzz you through the second door. The nephew told me if the police come the lights will go up and there will be a red light that will twinkle for a little bit. If there is a lesbian couple here grab one of them as they won’t arrest you if you were dancing with a woman. 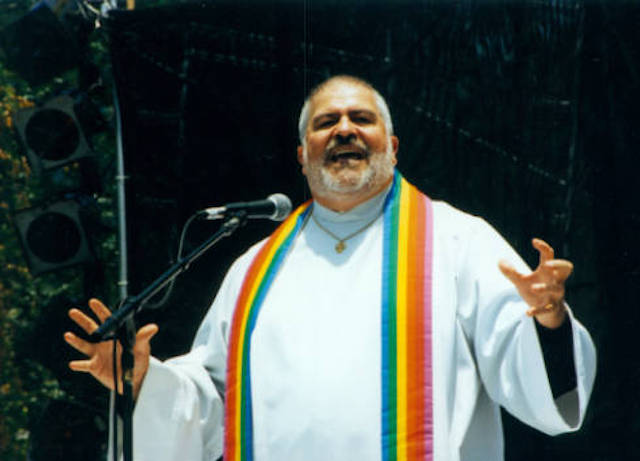 What inspired you to start a parade?
Morris Kight called me—he was very leftist and would always call me “Brother Troy”—and said can Bob [Rev. Robert Humphries] and I come over and see you? He handed me a letter from New York, which is in the ONE Archives. It said that they were going to do something to honor the show of strength made on Christopher Street at the Stonewall Riot, and would we do our own march here in Los Angeles. I said “Morris, this is Hollywood. Let’s do something a little different, let’s hold a parade.” Saying it and doing it turned out to be something different.

How do you feel about LA Pride becoming the Resist March?
Brian Pendleton [a board member of Christopher Street West] called me and said we need to reset what we’re doing. We feel like we need to do something different this time. We can go back next year, but our community needs to hear again that we are going to resist—like the early demonstrations here in LA. Black lives do matter, Hispanic lives matter, union groups, women, trans lives matter. Before Trump was elected I really thought all the things are going to come together. We won gay marriage, the big enchilada. But I soon discovered, very quickly, that we have to fight for the refried beans and the little enchiladas, too.

Will you be attending?
My partner Philip and I will absolutely be attending. I will speak at the start of the march with the Mayor of L.A. This is my home. When I moved here I adopted Los Angeles and I love my city.

The Resist March starts at the intersection of Hollywood Boulevard and Highland Avenue on Sunday, June 11. resistmarch.org

Related: Videos: The L.A. Pride Parade Through The Years, Defiantly Marching On