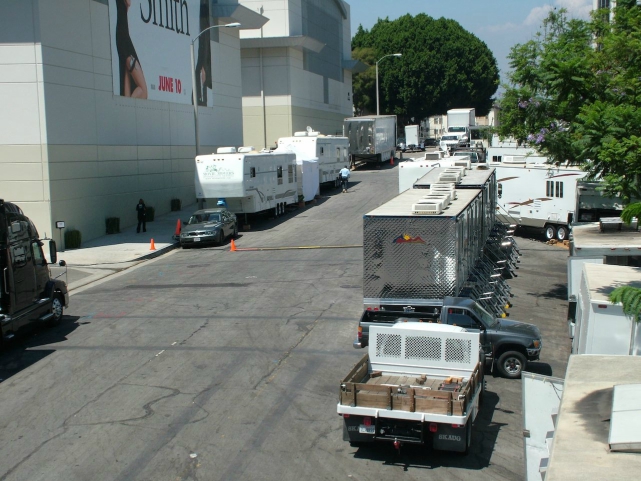 It may never rain in Southern California (though, this last winter is bringing that adage into question), but L.A. is facing a perfect storm. Sky-high land value, an expanded state tax credit for film and TV production, and a boom of new media platforms (Netflix, Buzzfeed, YouTube, etc.) pumping out year-round content has left soundstage space at a premium.

According to the Los Angeles Times, L.A. Center Studios is running at 100% capacity, while Sunset Las Palmas and Sunset Gower studios are running at 90% capacity. These are historic highs for a market that typically functions at 70% capacity rates.

"We are at a turning point," Carl Muhlstein, an international director with JLL real estate who is familiar with the L.A. production facility market, told LAist. "We have lost feature film production to places like Georgia and Louisiana, but we have done well with TV, commercials, and concert rehearsals."

The California Motion Picture and Television Production Credit that passed in 2014 (and which went into effect January 1, 2016) allocated about $330 million in tax credits for production in California. It also did away with the previous random lottery system in favor of productions that generate more jobs. These factors, among other things, have given TV production a boost. According to a recent report by FilmLA, which only tracks on-location production in Los Angeles, "Overall Television production is still tracking 10.3 percent ahead of its 5-year average."

"There are so many cyclical factors here," Muhlstein continued to LAist. "Tax credits, exchange rates, etc. So, it's really hard to predict." What is certain is the scarcity of land in Los Angeles, and the difficulty of developing in this city, he noted.

"Soundstages are very land-intensive, and land is a commodity we're running out of," Muhlstein concluded. "So now [soundstage] users have less negotiation power." Muhlstein noted that Netflix just signed a "historic" 10-year lease with Sunset Bronson Studios to use their soundstages, adding that it was the longest lease ever for a non-studio owned soundstage space. Muhlstein said that, previously, the longest such agreement was a 5-year lease that producer David E. Kelley had signed with Manhattan Beach Studios.