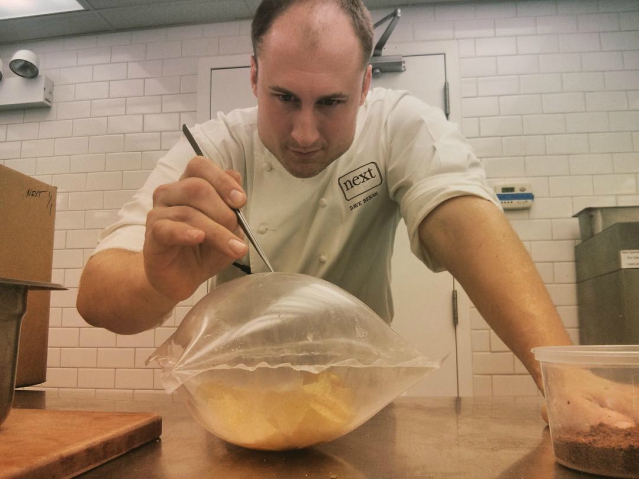 Dave Beran At Chicago's Next. (Photo via Dave Beran/Instagram)

Fans of Chicago's famed Alinea restaurant, take note: Grant Achatz-protege (as well as a James Beard award-winner, and former executive chef at Next) Dave Beran is opening his first project in Los Angeles.

The project, an 18-seat test kitchen opening at Santa Monica's Third Street Promenade, is called Dialogue. According to the Los Angeles Times, the space will be an 800-square-foot chef's counter-style restaurant at the newly redesigned Gallery food hall that's adjacent to the Criterion Theater between Santa Monica Boulevard and Arizona Avenue.

“I want to be able to interact with the guests and see how they react to the food,” Beran told the Times. “This is our opportunity to take them outside of their comfort zone and challenge them, but also bring them in and make them a part of it.”

Tickets for the two-and-a-half hour, 23-course experience run $185 per person before tax or any alcohol. Look for tickets to come online via Resy sometime in July for (fingers crossed) an August opening.

And if you're scratching your head as to why such an acclaimed chef is opening at the Third Street Promenade within a food hall that includes Everytable and Sloane's Ice Cream as tenants (no disrespect, we're just saying it all seems mismatched) just remember that Dominique Ansel is bringing his famed bakery to The Grove later this year. So, it seems that foot traffic is the chief consideration here.

Dialogue will be located at 1315 Third Street Promenade in Santa Monica.