There are so many great bars in Los Angeles that the question is no longer “Where’s a good place to grab a drink in this town?”— it’s “Where’s an interesting place to grab a drink?” L.A. pioneered the concept of themed bars and restaurants with places like the still thriving Clifton’s Cafeteria. Now the city has become a hot bed of bars that take you to different times and places. Here are the best themed bars in L.A., including a rustic nature lodge, a 1970s house party, even a pirate ship. 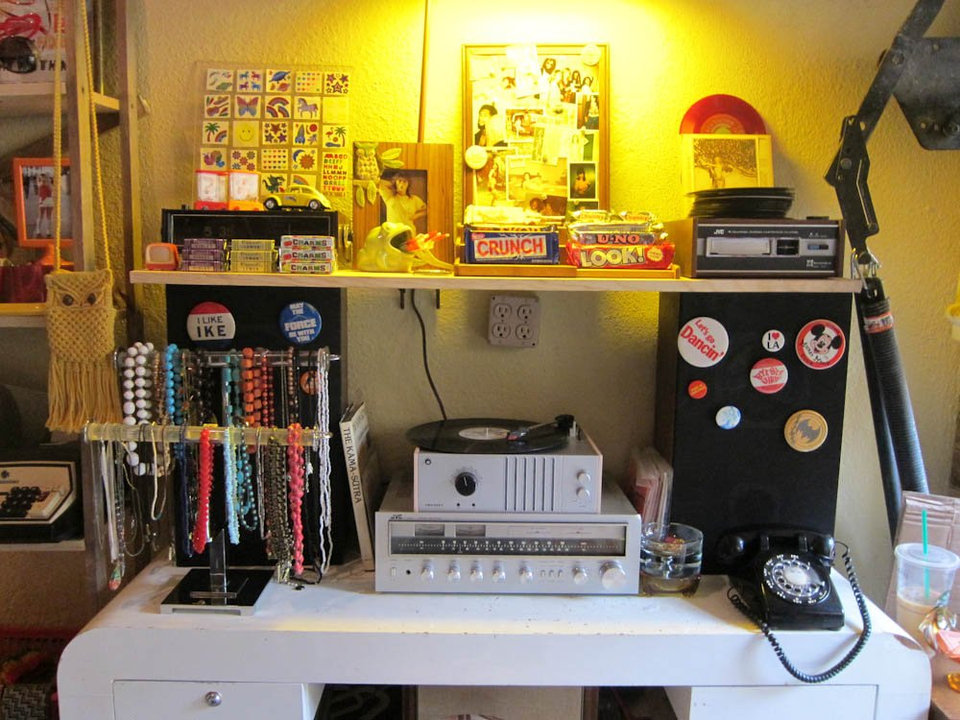 As you walk down El Centro Avenue, it looks like someone’s holding a garage sale. Step into the garage, forget what your mom told you and walk into the refrigerator on the back wall. Suddenly, you’ve found yourself transported back to the Carter Administration. Take a seat on the avocado green couch, sip on an aromatic gin cocktail named after the Village People and listen to a DJ spin booty bumping hits from the ‘70s. On the back patio you can enjoy dad’s BBQ and alcoholic snow cones served from an Airstream trailer. Davey Wayne’s is the most popular bar in the empire of Houston Hospitality; specialists in themed bars. 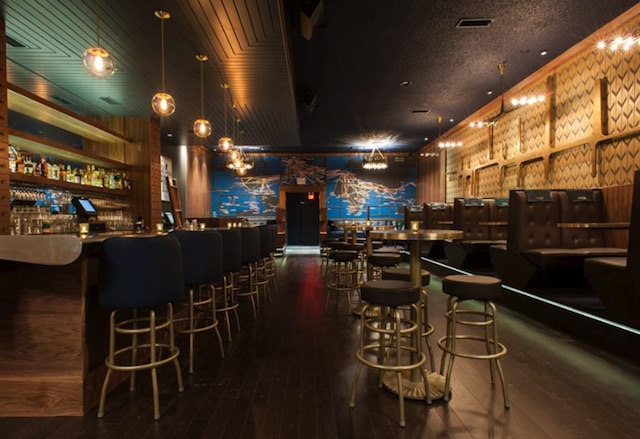 It may be hard to believe today (when United customers are literally being assaulted) but flying used to be luxurious. Now Boarding in West Hollywood is a throwback to those happier days. Inside an anonymous building, and situated four doors down from a porno theater, there sits a tiny piece of jet set heaven. The booths resemble vintage airline seats, the bartenders wear captain’s epaulets, and the menu is designed like an airline safety card. As you sip on the spicy tequila-based "D.B. Cooper" or the fruity rum cocktail called "Dr. Rumack," look at the giant map in the back of the room and dream about your next vacation.

There are two iterations of the Bigfoot Lodge. The Atwater Village original has fake signage for the Sasquatch National Forest that resembles real National Forest signs, as well as other kitschy rustic touches. Bigfoot West near Culver City has more of a Pacific North West look, with totem poles and other treasures on display behind glass. At both bars you can choose from a good selection of whiskies, as well as rustic off-menu cocktails like the "Toasted Marshmallow" and "Girl Scout Cookie." 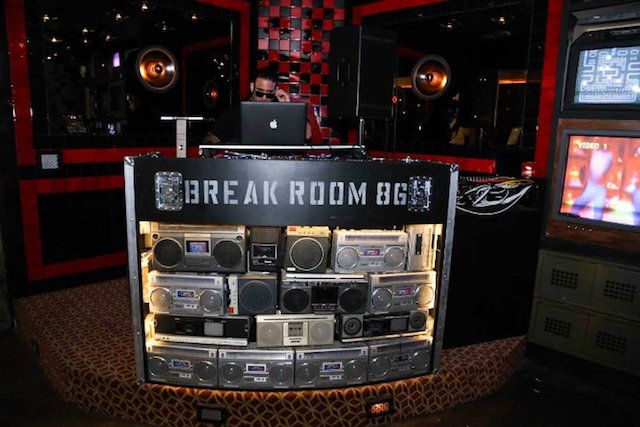 Houston Hospitality’s follow up to Davey Wayne’s is an ‘80s explosion. After you enter through a vintage vending machine off a loading dock behind Koreatown’s Line Hotel, you’ll find yourself in a John Hughes fever dream. The walls are lined with vintage electronics: speakers, TVs, boom boxes, cassette tapes. There’s a row of high school lockers next to a telephone booth just like in Bill and Ted’s. There are also four karaoke rooms, each of which is equipped with a selection of vintage Atari games. The ‘80s themed cocktails include the tropical "Fantasy Island" and the smooth "Moonwalker."

Vibe: Where do jungle cruise skippers go after work?

While Tiki Ti in Los Feliz and the Tonga Hut in North Hollywood are the definitive midcentury L.A. tiki bars, Tiki No in North Hollywood makes you feel like you’re actually in a secret island outpost. Booths are covered by bamboo and grass awnings and parcels hang from the ceiling. The bar’s liquor sits on a wall made of mismatched crates and tables, and the only TVs in the room look like modified 1950s Philco Predictas. The menu has most of the usual tiki suspects like the "Blue Hawaiian" and "Zombie," as well as originals like the "Lychee Luau." 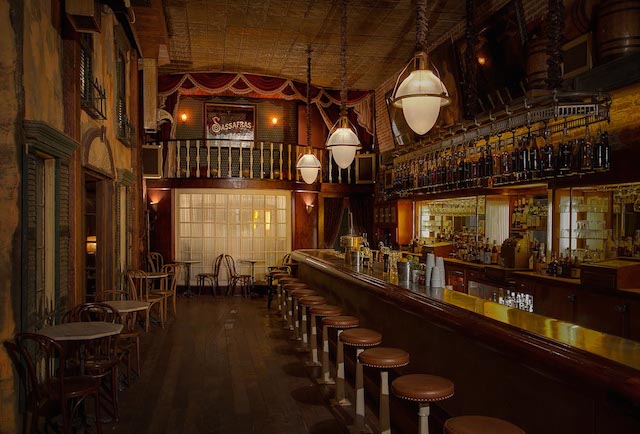 Vibe: Southern hospitality, without the humidity.

The first thing you notice when you walk into Sassafras in Hollywood is that most of the room is taken up by a Southern townhouse. It’s a great bit of decoration—according to owners the 1933 Group, it’s an actual Savannah townhouse that was deconstructed and brought to Hollywood! Antique furniture and other bric-a-brac add to the Southern ambiance, as do the delicious down home cocktails. Here you’ll find juleps made with toasted pecans, old fashioneds made with blackstrap molasses, punches made with grilled peaches and even an "Apple Moonshine Crusta." 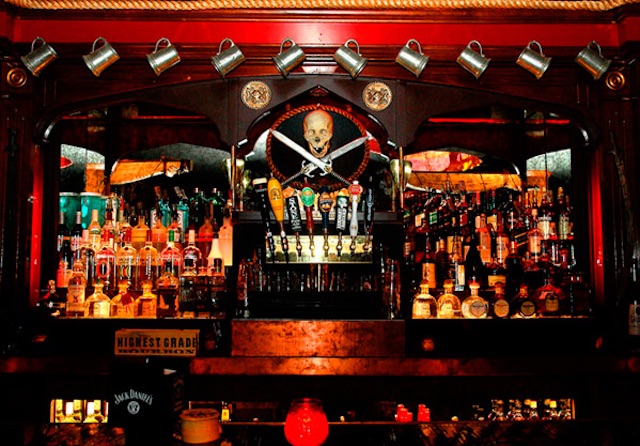 The Redwood Bar And Grill

The Redwood, around the corner from the Grand Central Market downtown, may not look like much from the outside, but the inside is like stepping into a pirate captain’s quarters. Rich redwood paneling, tables made from barrels, rigging and plenty of skulls give you a seafaring feeling without the seasickness. Bands and comedians, as well as nautical themed drinks like the "Treasure Island" and "Moby Dick," keep the mood just the right kind of rowdy. 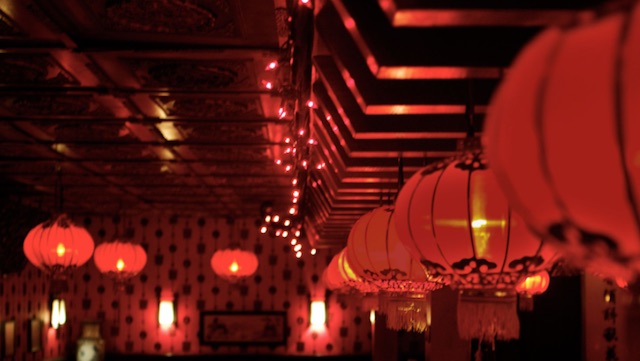 The Good Luck Bar in Los Feliz looks like the stereotypical post-WWII Chinese restaurant. In fact, it even played the part in the Coen brothers’ Hail, Caesar! last year. The room’s red hues and Chinese lanterns are enhanced by tiki inspired drinks like the "Beijing Sling" and "Karate Punch." 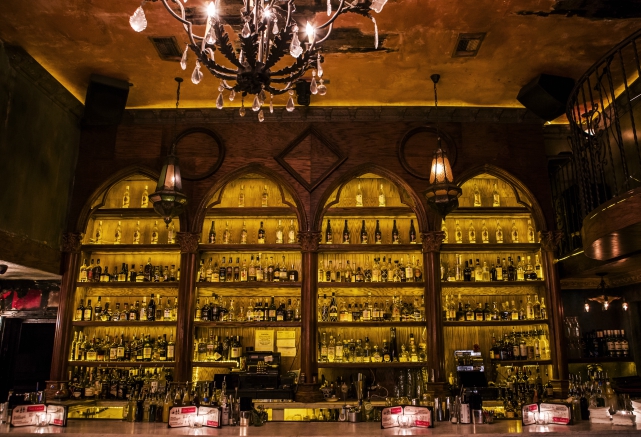 If you can’t make it to Havana, you can always head to East Hollywood and enjoy Houston Hospitality’s facsimile of Hemmingway’s Cuba. The mood that's set by wrought iron railings and Spanish Colonial doors is enhanced by regular performances from rhumba and mambo bands. The menu takes inspiration from that of Havana landmark Bar Florida, and includes vintage daiquiris and mojitos.

Michael Darling is a Los Angeles based freelance writer and editor; he is a contributing writer to the Los Feliz Ledger and former staff member of the Los Angeles Times Magazine. Follow him on Twitter.