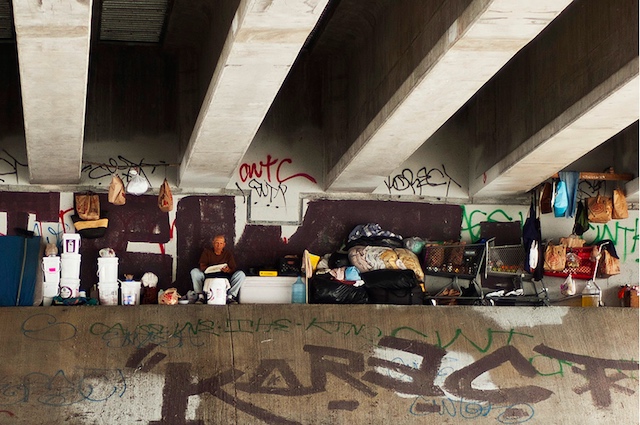 (Photo by cyna79 via the LAist Featured Photos pool on Flickr)

A study released Wednesday by the Los Angeles Homeless Services Authority (LAHSA) reports that L.A. County's homeless population has risen 23% since last year. According to LAHSA's 2017 report, there were 57,794 people experiencing homelessness in L.A. County on any given night—up from 46,874 in 2016.

The city of Los Angeles, which contains Downtown L.A.'s Skid Row, home to the nation's largest concentration of homeless people, reported a 20% rise in homelessness that was consistent with the county's overall surge. Disproportionately affected populations included veterans, whose homelessness rates rose 57% since 2016, and youth under the age of 24, whose homelessness rates increased by 61%. "We know from living and working in the community that we are surrounded by people in Los Angeles living without housing, living in distress, so these numbers shouldn't come as a shock—and yet, they do," Heather Carmichael, executive director for the homeless outreach service My Friend's Place, told LAist.

The 2017 homelessness numbers detailed in the LAHSA report were collected using the "Point-in-Time Count" mandated by the U.S. Department of Housing and Urban Development, which examined the number of homeless individuals in L.A. County streets in January 2017. LAHSA's 2017 tally also includes temporarily "sheltered" homeless individuals, whom the report defines as "individuals or families living in supervised publicly or privately operated shelters designed to provide temporary living arrangement." Still, only one out of every four homeless people were classified as "sheltered", the LA Times reports, and public and private shelters can provide only a temporary solution even for the individuals they do take in.

The LAHSA report attributed the rise in homelessness partially to the increasing cost of housing, noting that L.A. County's inflation-adjusted median rent rose by 28% from 2000 to 2014, while median renter income declined 8%. Mayor Eric Garcetti discussed the need for affordable housing in his annual State of The City address in April, proposing over $176 million of the city's budget to housing the unsheltered and praising the passage of Proposition HHH, a measure providing $1.2 billion in bond proceeds over a decade to build permanent housing in Los Angeles. The LAHSA study echoed Garcetti's concern, citing the potential value of Prop HHH and Measure H—a sales tax generating $355 million annually for services and programs to combat homelessness—in reducing L.A. County's rate of homelessness by 2018.