What do you do if you're a British ex-pat living in Hollywood? Where do you catch the North London derby? Where to find a plate of bangers and mash? For many, that answer was the Cat & Fiddle Restaurant and Pub, which first opened in 1982 in Laurel Canyon, then resettled a couple years later on Sunset Boulevard, where it remained until 2014.

The pub's closing was bemoaned by many (not just the Brits), as the patio was a hit with locals and tourists alike. Whether people were looking for a spot for a first date, or a space to unwind with old friends, the patio was always a good bet.

As such, there's new reason to rejoice in Hollywood, as the Cat & Fiddle is back after more than two years on hiatus. As noted at Eater LA, the pub has opened its doors again for a soft opening at a new space on Highland Avenue (Petit Trois is just a couple stores down, and Pizzeria Mozza is a block away). Meanwhile, its famed former patio location on Sunset Boulevard will reportedly soon be reimagined as a middle eastern-inspired restaurant helmed by New York chef April Bloomfield.

But it's not just the Cat & Fiddle namesake that will be replicated on Highland. The pub's roots will be in abundance, too. For one thing, the space will be run by Ashlee and Camille Gardner, the daughters of Kim and Paula Gardner, the husband/wife team who served as the original proprietors (Kim was a Londoner who'd moved to L.A.).

Asked about the new Cat & Fiddle, Ashlee told LAist that it was about combining the new with the old. "It's an interesting blend of the original with some efforts to modernize it," said Ashlee. "It's important to keep up with what your customers like, to ring in a refreshing perspective." Ashlee added that their mother, Paula, was responsible for the interior design, and will still be active and running the floor at the Cat and Fiddle.

The menu will stay true to its British pedigree as well, dishing out hearty servings of fish and chips, savory English pies, and a traditional Sunday roast that will be prepared in a wood burning oven. The bar, of course, will be stocked with a lineup of local craft beers, as well as some imported selections. Handlers also promise a "Cat's Cider," an English-style dry cider that's brewed under the pub's own label. And what's the Cat & Fiddle without a patio? "We knew we needed a spot with a patio when we were looking for a new space," said Ashlee. There will indeed be a new, breezy space for you to nurse your beers outside. It doesn't quite have that rustic flair of the previous iteration, but the Earthy color palette is on the nose.

The hours are still being hammered out, but the proprietors have specified that the Cat & Fiddle will be open for lunch, brunch, and dinner on the weekends. The pub and restaurant officially opens on June 5, and will kick things off with a week's worth of festivities: 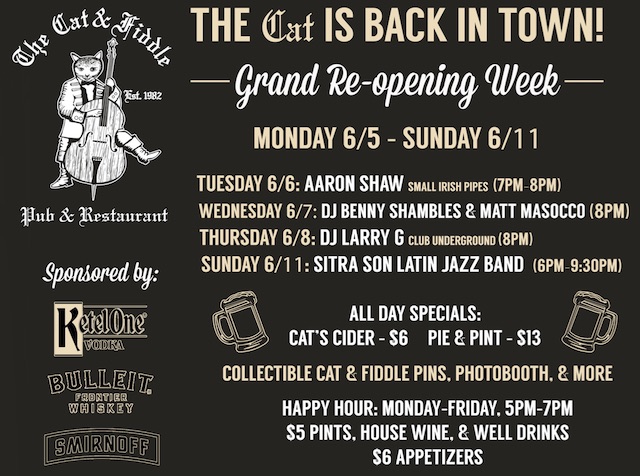