'Ramadan In L.A.' Seeks To Combat Islamophobia With A Month Of Interfaith Iftar Celebrations 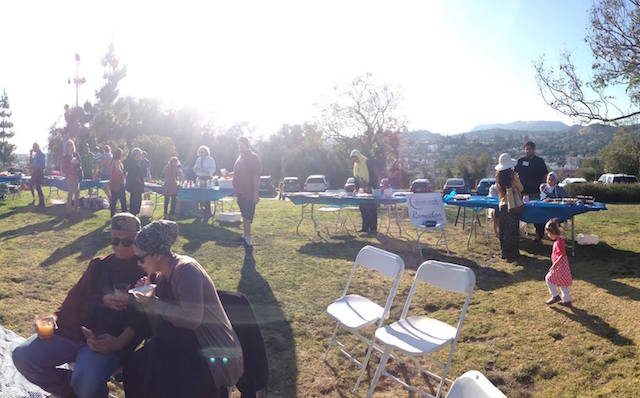 It should come as no surprise that the most diverse metropolis in America is also home to an incredibly diverse Muslim community. "The Muslim community [here in Los Angeles] is the most diverse in terms of their ethnic backgrounds in the United States," Shakeel Syed, Executive Director of the Islamic Shura Council of Southern California, told KPCC in 2015. "So they come from all continents, all places." There are an estimated 500,000 Muslims living in the region, making the greater Los Angeles area home to the second largest concentration of Muslims in the nation, according to the New York Times.

Amidst a climate of increased Islamophobia and hate, Southern California's vibrant Muslim community is preparing to celebrate Ramadan, a holy month of fasting that begins on Friday evening. Ramadan is the most sacred month of the year for Muslims, who commemorate it by fasting everyday from sunrise to sunset. The daily Ramadan fast (observation of which is considered one of the five pillars—or duties—of Islam) is broken each evening with Iftar, a celebratory meal that's often eaten with other members of the community.

Last year, shortly after the San Bernardino shooting and the subsequent rise in anti-Muslim sentiment, two organizers joined together to address the climate of fear and hate. Communications consultant Marium Mohiuddin had already left her job at the Muslim Public Affairs Council to start her own business, but she remained active in the interfaith world when she was approached by Karen Mack, the executive director at LA Commons, a local community-based arts nonprofit. Mack and her organization wanted to do something to combat Islamophobia, but she wasn't sure of the how or what. The two met for a coffee, and after a single cup they'd come up with the idea for what would become Ramadan in L.A.

Ramadan in L.A., which launched last June at the start of Ramadan 2016, is a series of community Iftars where individuals of all faiths can break bread and engage in dialogue and fellowship during the holy month.

"We're really trying to really target Islamophobia and anti-Muslim rhetoric, and see what can we do change the conversation," Mohiuddin told LAist. "With everything going on recently, I think there's so much misinformation about Muslims and Islam, generally. And people come together around food."

"It's not a place for lectures and speeches," Mohiuddin said. "It's about art and poetry and music, and it's a way for non-Muslims to go into a space where they can learn about Islam and Muslims and feel empowered to take part in any of these dinners throughout the month."

"A lot of people are really wanting to come together and to partner—it's not just a mosque here or a mosque there," she explained. The series has more than 20 sponsors, including non-Muslim faith groups, humanitarian and professional organizations, and LGBT groups. The County of Los Angeles Commission on Human Relations is also co-sponsoring this year's Ramadan in L.A.

Dinners will be held throughout the L.A. area, and the idea, according to Mohiuddin, is that "people from across L.A. County are welcome to attend any, and are encouraged to participate."

Mohiuddin explained that Iftar is about far more than just breaking a fast. "To me, it's a time when I know I'm going to see everybody. It's a time of people coming together and it's a time of reverence—not just for the community and friendships and people, but also what you're doing and committing to [with the fasting]. You're committing to a kind of state of being, because fasting almost like a state of meditation," she said.

Ramadan in L.A. will kick off on Friday at Barnsdall Park with an interfaith Iftar from 6 p.m. to 9 p.m.

Events will continue throughout the month, spearheaded by different organizations and in locations across the L.A. area. Most are free, though some require tickets and have a small fee.

On June 7, NewGround, a Muslim-Jewish partnership, will be holding their community Iftar at Wilshire Boulevard Temple in Koreatown. Tickets, which include dinner, start at $40.

More of the events can be found on Ramadan in L.A.'s website.