The Coming Food Hall-ization Of L.A. 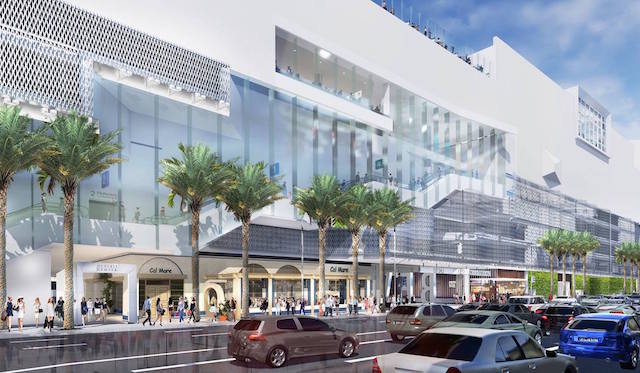 If you've ever been to downtown's Grand Central Market, you know how much Angelenos love a good food hall. The one-hundred-year-old market has seen new life in the last few years as a wave of higher-end food stalls opened up shop. Whatever your thoughts on the transition, there is no denying that patrons flock here in droves. Grand Central has already launched the careers of Alvin Cailan, whose Eggslut has locations as far away as Manhattan; Sara Kramer and Sarah Hymanson, who followed up GCM's Madcapra with the renowned Kismet; and Kyle Glanville and Charles Babinski, whose G&B Coffee has been growing iterations all across L.A. under the moniker Go Get 'Em Tiger.

Last June, Brooklyn's uber-popular Smorgasburg made its L.A. debut. Smorgasburg L.A. is essentially a weekly pop-up food hall, with some 60-plus food stall setting up shop at the Alameda Produce Market on the edge of the Arts District. A testament to its success? For nearly every Sunday since its opening, Smorgasburg L.A. has seen several thousand attendees.

So that's it, right? L.A. has tripled-down on the food hall/food-cubator model (we haven't even mentioned Chinatown's Far East Plaza!), and we should expect to see GCM, Far East Plaza, and the Smorg chugging along merrily into the foreseeable future? Not so fast. The next year is slated to see not one, not two, not five, but seven new food halls opening across the city.

And the food hall trend isn't limited to Los Angeles; if anything, L.A.'s food hall explosion is indicative of a national trend moving west. Though food halls are technically nothing new (especially in Europe and Southeast Asia, where it's common to find a cornucopia of food vendors in one place), the roots of their current stateside renaissance can likely be traced to New York City, where the Turin-based Eataly opened to great acclaim in 2010. By 2016, food halls were "opening faster than nail salons" in the Big Apple, "and each with its own personality," according to the New York Times. And the appeal of the food hall goes beyond the consumer desire for a diverse array of tastes under one roof; they also offer chefs and restaurateurs the freedom and safety to experiment. Roughly 60% of restaurants fail during their first year, which makes the lower overhead and built-in foot traffic of a food hall especially attractive to culinary entrepreneurs.

“This food-hall movement is something that just will pick up steam,” restaurant analytics expert Damian Mogavero told Marketwatch earlier this year. “Every secondary city will have one and every major urban center will have a few. Think of food courts and think of this as the next Macy’s or Bloomingdale’s. Instead of Macy’s or Bloomingdale’s anchoring real-estate projects, it’s going to be food that is the future anchor, because that is the way we want to eat.”

Even Plano, Texas—a Dallas suburb with a total population that would fill out less than half of the seats in the Los Angeles Unified School District system—is slated to get its own food hall this fall. But let's get back to Los Angeles, where we are quickly accelerating toward peak food hall-ization. Ladies and gentlemen, fasten your seat belts, because here's what's to come:

Echo Park Village
Last summer, word of a forthcoming food hall along Glendale Boulevard south of the 101 (Historic Filipinotown by our standards, Westlake by Google's, and Echo Park by realtors') was announced. Details are scant on the project [South Park Group was not available for immediate comment on the project], and an opening date is still a hazy "coming soon", but one major tenant seems to be known: Clark Street Bread (of Grand Central Market, if you're keeping score at home). 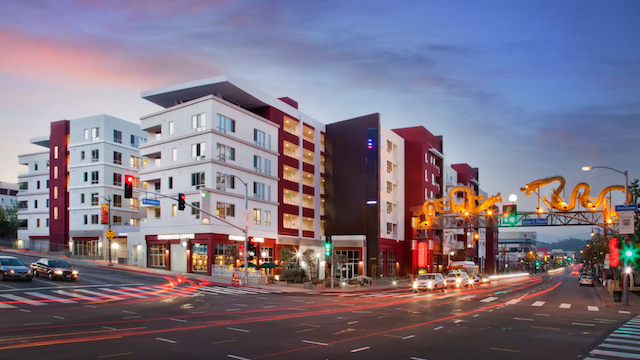 The Apiary
A hop, skip, and a jump from Echo Park Village is the forthcoming The Apiary food hall in Chinatown. The project, just a block south of Far East Plaza, will open by late summer in the Jia Apartments on Broadway, Bobby Navarro, a spokesman for the project, told LAist. Expect to see a Mama Musubi stall there, as well as OC favorites Hatch and The Iron Press.

The Apiary is located at 639 North Broadway Boulevard in Los Angeles. 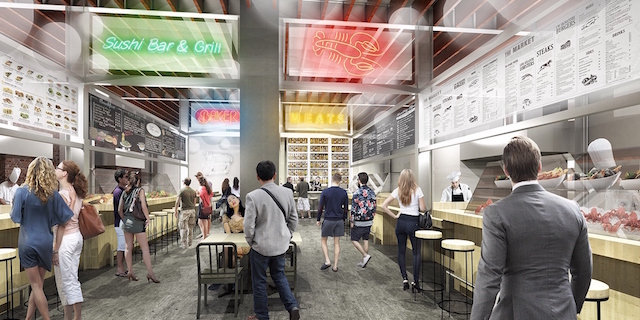 Corporation Food Hall
In downtown, not far from Grand Central Market, Corporation Food Hall has been under construction for some time now. As Eater LA notes, the space should be opening by mid-July, and will include nearly a dozen full-kitchen stalls. However, no word on any vendors, yet. 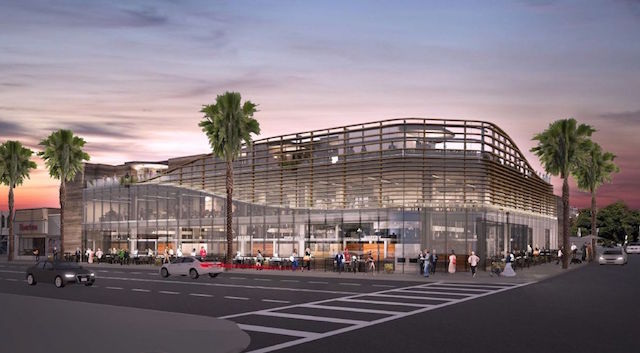 The Beverly Center and Edin Park
The Beverly Center is mid-way through its renovation plans that will see it's own food hall open for late 2018, and down the street, Edin Park will no doubt become a major foodie destination in mid-city (and beyond). The two-story project will hold 32 restaurants, according to its website, have a roof deck, and will hold some 600 people. 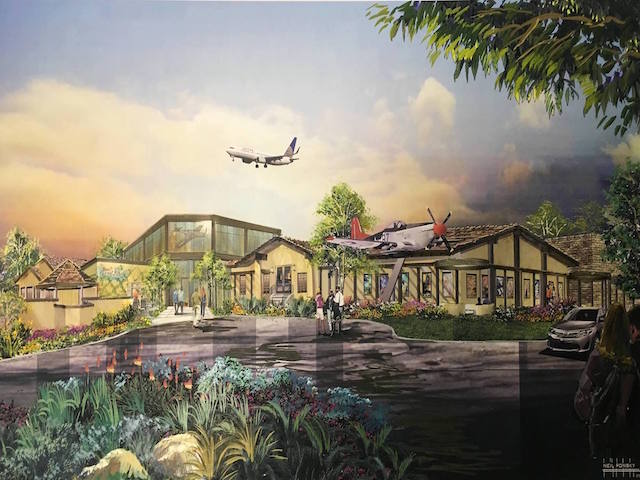 (Rendering via The Proud Bird/Facebook)

The Proud Bird
And finally (almost there), work has already commenced on The Proud Bird—a food hall near LAX. "The reimagined space will have an open-air feel and industrial accents to celebrate the power of flight with floor-to-ceiling windows that provide panoramic views of LAX’s approach runways," explains Proud Bird's website. The space will have six full kitchens and should be open by July.

The Proud Bird is located at 11022 Aviation Boulevard in Los Angeles.