The 'Silver Lake Shaman' Is Now Officially A Type, And Here's Everything You Need To Become One 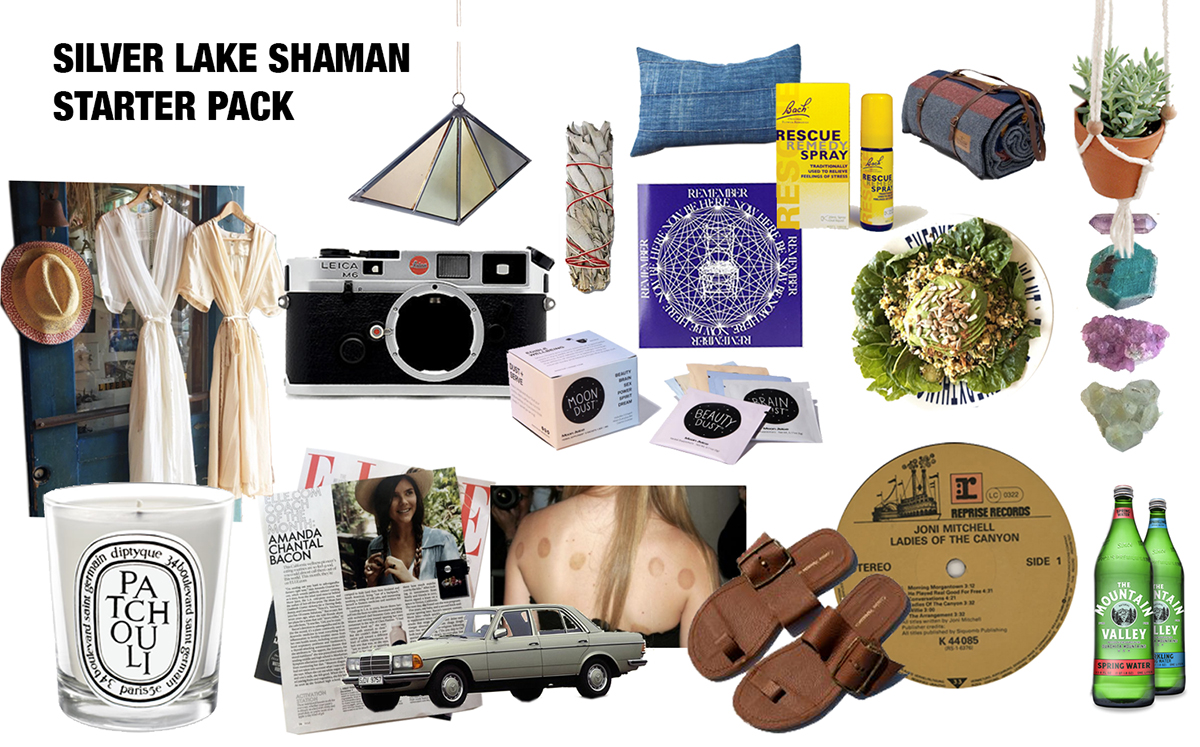 Illustration by Julia Wick/LAist (Click image above to enlarge)

The hipster is over, and it is now all about the upscale hippie—or at least so claims Quartz, in a new piece on the so-called "Silver Lake shaman," a lady-type-cum-lifestyle-concept that they've pronounced as the heir-apparent to the Brooklyn lumberjack. The Silver Lake shaman, according to Quartz's Jenni Avins, has already taken over the Brooklyns of Los Angeles (Silver Lake, Echo Park, et al.) and she's coming for the Brooklyns of the rest of the world. "You’ve probably seen her on your Instagram feed," Avins explains. She is:


[A] woman awash in natural light, wearing a cocoon-shaped dress in a shade of golden turmeric or faded paprika. She wears flat leather sandals, has unkempt-but-pretty hair, and is likely in the company of a handmade ceramic, a succulent plant, or a piece of avocado toast. She is LA’s Silver Lake shaman, and she’s coming soon to a city near you.

Not to be confused with an actual shaman (defined by Merriam-Webster as "a priest or priestess who uses magic for the purpose of curing the sick, divining the hidden, and controlling events" and largely associated with indigenous cultures), the Silver Lake shaman is equally at home in Topanga and Laurel Canyon as anywhere east of Vermont, with slight variations found in Venice. She is, according to Quartz, "no more an actual shaman than the Brooklyn lumberjack felled trees for a living, but the lifestyle does include supplies a person might find in a healer’s tipi: crystals, smudge sticks, and essential oils among them." Suffice it to say, she's the kind of girl who would know far better than to wear a bindi, but could easily have her very own backyard tipi (made of hand-dyed indigo shibori, if she's worth her weight in Himalayan pink salt).

She follows Amanda Chantal Bacon on Instagram, brunches at Cafe Gratitude, has "saged" her new apartment before even searching for furniture at the Rose Bowl and keeps a $64 Patchouli candle artfully placed on a ledge of reclaimed wood alongside vintage Playboys in her bathroom. She is the girl in a denim jumpsuit who once told me that there was hardly any Mexican food in Tulum because "everything there is farm-to-table." She's likely to own a $300 shapeless linen caftan but not believe in money as "a concept" (the healing powers of love and light, however, are very much fair game).

She is, in short, why I once told an ex-boyfriend I'd rather kill myself than walk with him to the Silver Lake Farmers Market.

So how, you might be wondering, does one become a Silver Lake shaman? It's easier than you think! Just follow these simple steps.

First, you must listen to every Father John Misty album backwards, on vinyl, while lying on a Pendleton blanket while two or three leggy friends play with your hair. Tip the Postmates delivery guy dropping off your Moon Juice and then climb the 6.7 miles of painted stairs in Silver Lake while carrying a succulent terrarium in a clay planter. Feel your aura. No, really feel it. Look your boyfriend in the beard and ask him nicely to refill your diesel Mercedes with vegetable oil on his way back from the studio. Re-watch The Source Family documentary on Netflix while idly telling a story that involves at least three of the following: an Ayahuasca retreat, the L.A. Ladies Choir, MDMA, Pappy & Harriet's, waiting in line for a Coconut Kale at Naturewell, your parent's house in Malibu/the Hamptons, mercury in retrograde, the workings of a radical political philosophy but as explained by a child using Google Translate, what Carlos Castaneda means to you, or Paleo pot brownies.

And if that doesn't work, revisit the starter pack above.