Amazon To Open A Cozy Conglomerate Bookstore In Century City 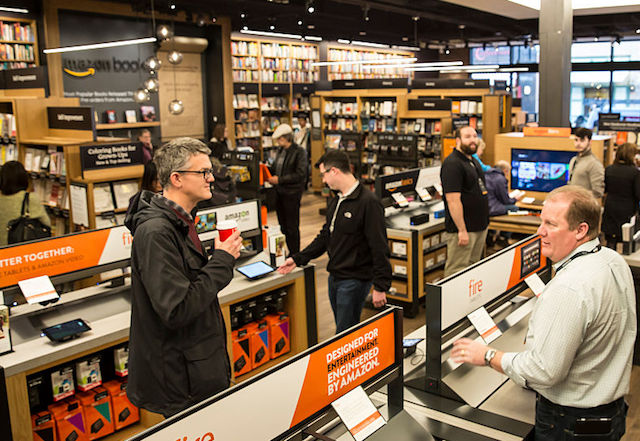 At the Amazon Books store in Seattle, Washington. (Photo by Stephen Brashear/Getty Images)

From experimenting with delivery drones, to bringing liquor to your doorstep, Amazon is like that guy in the office who downed four cups of coffee and is now jotting down all his wild ideas on the whiteboard.

Among its latest ventures is book-selling...as in, in-person bookselling, at actual bookstores. The internet giant opened its first brick-and-mortar bookstore in 2015 in Seattle. Since then it's expanded to four other locations, including one in San Diego.

Now, we can expect one at the Westfield Century City mall too. As reported by the L.A. Times, Jeff Bezos' crew has filed a permit to open an Amazon bookstore at the retail center. Apparently, Amazon had been eyeing the L.A. area for several months, and had considered Old Pasadena and Melrose Avenue as possible locations, reports the Los Angeles Business Journal. Future stores are also planned for Walnut Creek, Calif., Lynnfield, Mass., Bellevue, Wash., and Paramus, N.J., along with two stores in Manhattan, according to the Times.

There's no word on when the store will open; Amazon hasn't even officially announced the store yet, so it's still a ways off.

So these stores are, like, regular bookstores, right? No, they're not. As detailed at the San Diego Union Tribune, the stores act as a kind of promotional hub for Amazon's online/technological offerings. For one thing, in lieu of price tags the books instead display a review and an average user rating (yuck)—if you want to know the price you'll have to ask and/or download the Amazon app and scan the merchandise. Also, members of Amazon Prime are treated to discounts, while all the other "normies" are stuck with higher prices (that's what you get for being an animal!).

The Tribune has more on the cozy sensibilities of this mom-and-pop bookstore:

San Diego shoppers will indeed find that the store is designed to funnel them into Amazon’s broader e-commerce marketplace. Sales associates’ most frequent refrain — the question: “Do you have the Amazon app on your phone?” — is a constant reminder that something larger is at play. Shoppers are not only trained on how to download the Amazon app and scan books to check prices, but are also encouraged to pay with their Amazon account, via smartphone, at checkout.

And you can bet that the store will be selling the Kindle and the whole slew of Amazon gizmos. So no, Amazon isn't bringing back the concept of a neighborhood bookstore—it's offering an updated facsimile of it.

If it sounds like we're implying that Amazon has monopolized the bookselling industry, we'd like to point out arguments that the company has actually helped smaller book stores. According to Quartz, Amazon's online store may have killed off the big chains like Borders, but the death of larger shops means that smaller stores are able to shine. These stores aren't quite as threatened by Amazon, as they offer things that an online retailer can't, things like coffee, events, and a personable staff—stuff that we still care about as sentient, carbon-based lifeforms. The American Booksellers Association, a non-profit that advocates for independent book retailers, says that its membership has risen every year from 2009 to 2013.