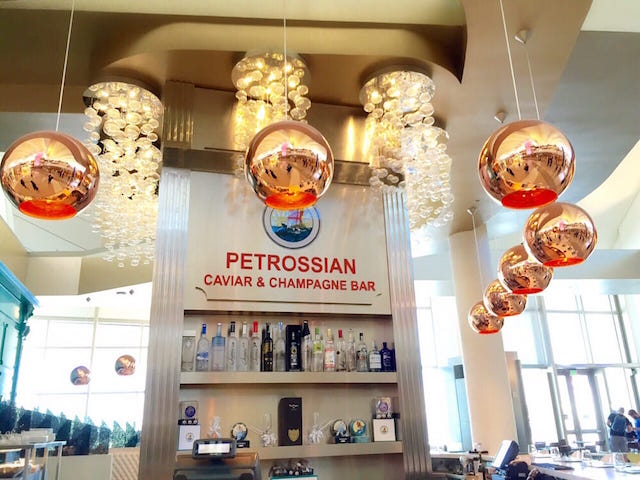 Petrossian Caviar and Champagne Bar at LAX. (Photo by Marmar Q. via Yelp).

A former chef at the LAX outpost of Petrossian Caviar and Champagne Bar is claiming that he was fired by the legendary caviar brand after calling his bosses out for allegedly serving rotten fish eggs. (Yes, there's a caviar bar at LAX. It opened in December 2013, and if you're in the market for more lavish in-flight dining options, they sell "Caviar in the Air" packages ranging from $205.50 to $1,581.50.)

According to TMZ, former Petrossian chef Donald Gray alleges that he fell ill "from tasting expired caviar the honchos insisted he sample before dishing it out to the travelling masses at LAX," and he's filed a lawsuit against his former bosses. TMZ reports that the suit contains details about how Gray was instructed to cook with expired caviar, and to rip labels off cans in order to hide bygone expiration dates. Gray alleges that he got food poisoning after sampling some of the old caviar (ew x1000) in 2015, he "began filing paperwork to report it, but instead of cooperating ... higher-ups disciplined him for eating caviar on the job," which is against company policy.

As both TMZ and our friends at Eater LA note, the LAX outpost of Petrossian isn't technically a part of the legendary French caviar empire; it's merely a franchise that licenses the name. The brand, according to Eater, "is considered in caviar circles to be among the pinnacle of quality." Given the association, we still thought we'd reach out to Petrossian's on-call Caviar Concierge for some thoughts.

Would you be able to tell by taste if caviar was rotten?

I mean, of course, it's food. I don't know, logistically, but it is a seafood. You can tell if seafood is fresh.

Do you have any thoughts or comment on the LAX Petrossian lawsuit?

I can give you the corporate office number.

We called Petrossian's corporate office but no one picked up. We left a message and will, of course, update the post accordingly if we hear back. In the meantime, we advise our readers not to eat any food that does not appear to be fresh—especially if it's caviar at the airport.