What The Passage of Measure C Means for L.A., And What You Can Still Do About It 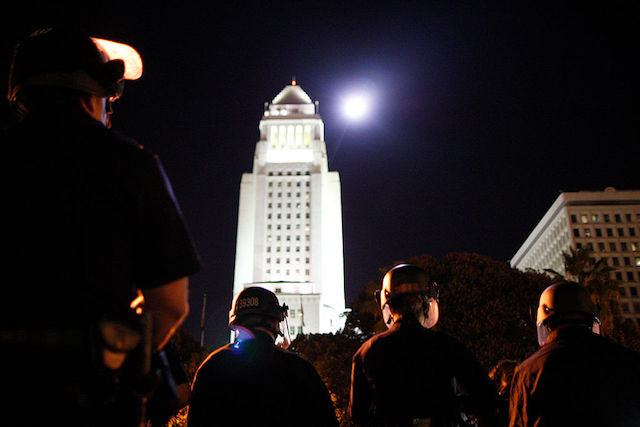 Measure C, a controversial ballot initiative seeking to significantly change LAPD disciplinary policy, looks to have passed with an initial count of 57.1% of the vote in Tuesday's election.

Placed on the ballot by the Los Angeles City Council with the support of Mayor Eric Garcetti, Measure C gives police officers facing disciplinary hearings a choice between appearing before the existing Police Department Board of Rights—currently, a panel that includes two command-level officers—and a new, all-civilian review board. An all-civilian Board of Rights may sound progressive, but opponents of Measure C—ranging from the L.A. Times to the A.C.L.U to the L.A. branch of Black Lives Matter—argue that the "all-civilian review board" is a misnomer, as board candidates must have seven years of arbitration experience or similar work, and must undergo a private interview with the police commission. “We refuse to let the police union and police commission distort the meaning of civilian and stack the deck in favor of bad officers,” Karren Lane, vice president of the South L.A. justice reform nonprofit Community Coalition said in a statement.

Measure C isn't a done deal yet; L.A. City Council still needs to pass an ordinance in order to put the measure into effect, which many opponents are urging against. "Mayor Eric Garcetti, Council President Herb Wesson and members of the city council helped win [Measure C's] passage by misleading voters, and no doubt earned the favor of the police union, but at the cost of weakening discipline and accountability at LAPD," Peter Bibring, director of police practices and senior staff attorney at the ACLU of Southern California said in a statement, adding, "If they want to retain any credibility that they have L.A.'s interests at heart, they must not simply pass the ordinance the union wants."

We spoke to Melina Abdullah, an organizer with Black Lives Matter L.A., about how Measure C will affect the community and what Angelenos can still do to fight back.

Can you give us a breakdown of Measure C in layman's terms?

Measure C is kind of complicated, but essentially, its passage enables City Council to pass an ordinance that allows for an additional choice in the Board of Rights, which functions as an appellate body for police officers who have been found guilty of misconduct by the department. Right now, the Board of Rights consists of two command staff officers and one non-officer. The second option that City Council can now pass will let police officers appear before three non-officers. City Council calls it an "all-civilian review board," but all board candidates have to have 7 years of arbitration experience. As a result, most of them are attorneys, some of them are actually retired cops, retired judges, retired prosecutors who are sympathetic and closely connected to law enforcement. so they've actually been more lenient on guilty officers than the command staff has, which is interesting.

What kind of risk does this so-called "all-civilian review board" pose to the community?

The "all-civilian review board" enabled by Measure C gives guilty officers more choices in their appellate body, which weakens police accountability at the expense of public safety.

Is there anything opponents can do now that Measure C has passed?

What we can do now is put public pressure on City Council to redefine "civilian" in the ordinance that they will pass. They can choose to say that civilians on the Board of Rights must be actual civilians, and not people from this pre-approved list with ties to law enforcement. The passage of Measure C was a favor to the police union on the part of City Council, so we have to remind them that they work for us, not the police.

What will that public pressure look like, on a grassroots level?

The four organizational leads on No on C—the ACLU, Black Lives Matter, the Los Angeles Community Action Network and the Community Coalition are working together to keep people involved in this fight, and we encourage voters to join us and make their voices heard. We'll be holding public meetings and forums to discuss questions like, "How do we make sure that elected officials on City Council are more beholden to the community than they are to the police?"

Was there any positive takeaway from Tuesday's passage of Measure C?

Yesterday was absolutely a show of strength on the part of the community. Last night’s turnout was better than we expected for a local election—there was nothing else on the ballot in many districts, so it really says something that so many people came out specifically to vote on Measure C. If we look just at voters who voted at the polls [as opposed to those who voted by mail], we defeated Measure C with a 55% margin of victory, and we think those people voted "No" because they want real change in terms of public safety in this city. We need to work together to reimagine what it means to build a safe community; [No on C] may not have had the victory we hoped for at the polls, but just the act of getting out the vote is a victory in itself.