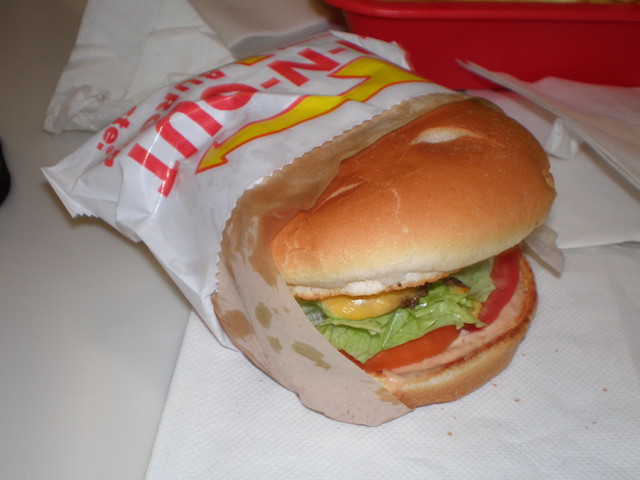 Photo by Oreos, via Wikimedia Commons

Nothing gold can stay, it appears. East Coast burger chain Five Guys has officially edged out L.A. favorite In-N-Out in the running for America's favorite burger, KTLA reports. The 2017 Harris Poll, which tracks input from over 100,000 consumers, has crowned Five Guys as its "Burger Restaurant Brand of the Year," relegating two-time former winner In-N-Out to a paltry second place.

The battle of the brands has posed a paradox for L.A. burger aficionados ever since Virginia-based Five Guys first expanded in 2010 into Irvine-based In-N-Out's turf in Southern California. We reached out to Five Guys and In-N-Out for comment, but In-N-Out demurely declined to discuss their loss, while Five Guys put us on hold and never got back to us (possibly due to the raucous demands of the hungry customers we could hear demanding burgers in the background. Hey, it's hard to be #1.)

Five Guys may have won the day this time, but In-N-Out still has a dedicated following of L.A. fans loyal enough to stop for an Animal-Style Burger and shake mid-police chase, and that's something no poll can take away.