Uncovering The Storied History Of The Hollywood Roosevelt Hotel

It’s nearly impossible to walk down Hollywood Boulevard without being approached about a movie tour, a double-decker bus trip, or a map to the stars’ homes. But you don’t have to venture far from the storied Walk of Fame—and don’t even think about getting in one of those sightseeing vans with the roof soldered off—to travel back in time to the golden age of cinema. Sure, there’s Grauman’s Chinese Theater, where hundreds of celebrities have dipped their hands and feet in the concrete around it. But the best-kept shrine to old Hollywood is located across the street at the Hollywood Roosevelt hotel, which was financed in part by movie theater magnate Sid Grauman—it opened just three days before his namesake theater—and celebrates its 90th anniversary this week. 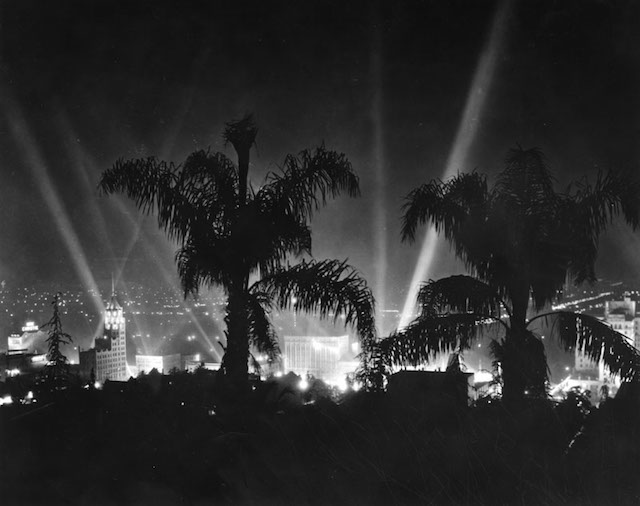 Night view of tropical palms silhouetted against the brilliance of a Hollywood movie premiere with the Roosevelt Hotel on the right. Circa 1930s. (Photo courtesy of the Los Angeles Public Library Photo Collection)

Named for President Theodore Roosevelt, the Hollywood Roosevelt officially welcomed its first guests on May 15, 1927, at a time when the movie industry was experiencing a revolutionary transition from silent to sound films. With a group of investors that included husband-and-wife power couple, the so-called “King of Hollywood” Douglas Fairbanks and “Queen of the Movies” Mary Pickford, the 12-story hotel on the corner of Orange Drive quickly became a fixture for the Hollywood elite. Its reputation for housing the silver screen’s brightest stars was cemented on May 16, 1929—exactly two years and one day after the hotel opened—when its Blossom ballroom hosted the first ever Academy Awards.

The inaugural event was a small, private affair held for just 270 people including host Fairbanks, honorary award winner Charlie Chaplin, and Academy founder Louis B. Mayer, who was also among the hotel’s founding investors. Whereas today’s Academy Awards notoriously drag on for hours, the 1929 ceremony lasted all of 15 minutes, with the winners having already been announced months ahead of time. The Oscars moved to the Biltmore hotel and the Ambassador hotel (RIP) over the next decade, but evidence of the historic event remains throughout the Hollywood Roosevelt: A poster for best picture winner Wings hangs in the lower level and its two private event spaces are dubbed Oscar and Academy (the latter is the former headquarters of the Academy of Motion Picture Arts and Sciences). 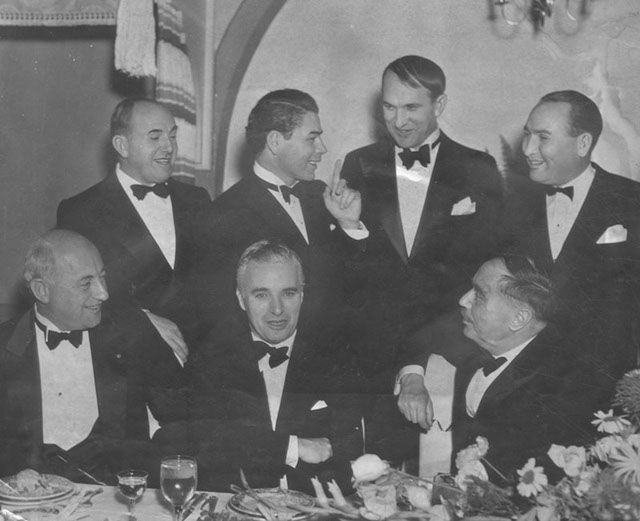 Film industry leaders at a gala testimonial dinner given in honor of H. G. Wells, celebrated British author, and Charles Chaplin, world famed comedian, by the Academy of Motion Picture Arts and Sciences at the Hollywood Roosevelt Hotel on December 4, 1935. Seated, left to right, are Cecil B. DeMille, Chaplin and Wells. Wells, who has spun out thousands of words, said of Hollywood: "It has me speechless. My impressions are still beyond me." (Photo courtesy of the Los Angeles Public Library Photo Collection)

The Blossom ballroom may have hosted the Oscars only once, but it still gets its fair share of Hollywood action. The art deco banquet hall has been rented out for everything from premiere parties for last year’s Ghostbusters reboot to season finale parties for Game of Thrones and American Idol, according to the hotel’s director of entertainment sales Juan Pineda. The ballroom, which is lined with whimsical wrought iron balconies and features the original chandeliers, was recently restored to look almost exactly how Chaplin would’ve remembered it in the 1920s—save for the ceiling, which now uses LED lights that that can be customized to illuminate any shade of the rainbow.

The ballroom is far from the only hotel space that’s been touched by Hollywood royalty. Just outside its arched wooden doors are the Spanish-tiled steps where, legend has it, Bill “Bojangles” Robinson taught Shirley Temple how to tap dance. Twelve stories up, at the top of the main tower, is the three-level, 3,200 square foot Gable & Lombard Penthouse, named for suite where Clark Gable and Carol Lombard carried on a secret love affair in the 1930s (The two eventually wed, but Gable was still married to Rhea Langham at the time). Prince rented out the penthouse in 2007 when he played a series of concerts in the Blossom ballroom. According to Pineda, the late rock star requested the suite be decorated in white shag carpeting and portraits of himself in Warhol-esque pop colors.

Then there’s the Marilyn Suite, where Marilyn Monroe lived for two years while contracted by the studios in the late 1940s. The second-floor room features a balcony overlooking the pool and a platform canopy bed nestled between padded white walls and a mirror-like black frame mounted on the ceiling. Matthew McConnaughey checked into it when he got his star on the Walk of Fame in 2014, according to Pineda. Though he never got a suite named after him, Montgomery Clift lived in room 928 for three months while filming the 1953 war epic From Here to Eternity; he reportedly strolled the halls practicing the bugle in preparation for the role. Some guests who believe Clift’s spirit haunts the building have reported hearing the bugle in the 9th floor hallway, according to an L.A. Times article. Others have claimed to see Monroe’s reflection in a mirror that once hung in her cabana (Pineda brushes off any claims of hauntings and says the mirror in question is no longer in the hotel.)

But you’re more likely to catch a glimpse of Monroe—or at least her most memorable movie look—out by the pool, where the cocktail waitresses wear white halter-top bathing suits and silky wrap-around skirts in homage to the blonde bombshell. It’s here where the young starlet, then a relatively unknown swimsuit model, shot her first print advertisement, reportedly for a sunscreen ad. The diving board she posed atop is no longer there, but nearly everything else about the surrounding pool area has been restored to evoke mid-century, right down to the white cabana rooms and wood-paneled Tropicana bar. 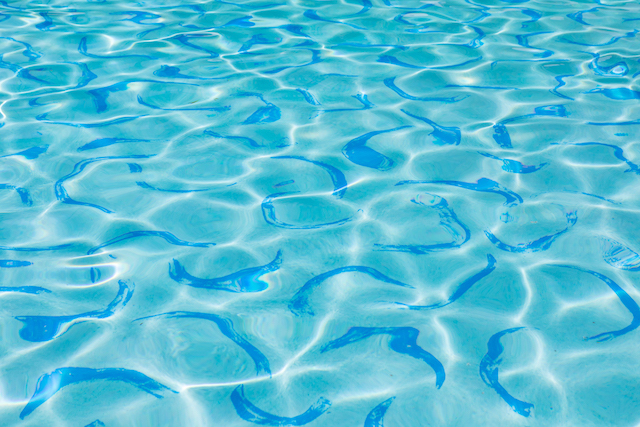 Of the few outdoor details that break the illusion of the 1950s and ‘60s is the pool itself, the bottom of which was painted with blue squiggles by British pop artist David Hockney in 1988. The piece of art has been valued at more than $1 million but it almost didn't survive; then California Governor George Deukmejian had to sign a bill exempting it from a state mandate that the bottoms of pools be unpainted, according to a 1988 L.A. Times article, which characterized the exemption as "a minor triumph of art over bureaucracy." Here's how the Times' Jack Smith described the work a few months after it was painted:


In four hours, working at the bottom of the empty pool, [Hockney] had covered it with symbols variously described as squiggles, caterpillars, slugs, commas, apostrophes and parentheses. Each was exactly like the other, and they covered the pool in an interconnected, basket-like pattern.

The result, when you looked into the filled pool of still water, was a vast spread of large blue parentheses, commas, or whatever. But when someone dived in, disturbing the water, all the commas seemed to come to life, weaving and dancing and shimmering.

But the Hollywood Roosevelt didn’t always lean so heavily into its glamorous past. Having changed ownership numerous times over the years, the hotel fell into various states of disrepair and near-demolition before being declared a Los Angeles Historic-Cultural Monument in 1991. Some of its walls had been covered by graffiti by the time it underwent a massive $40 million renovation in 1985, according to the book Historic Hotels of Los Angeles and Hollywood. 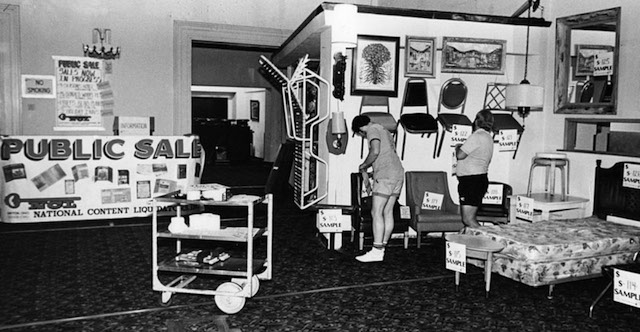 An August, 1984 interior view of the Hollywood Roosevelt Hotel room displaying its contents which are for sale. The items are cataloged and priced. They include beds, chairs, paintings, mirrors and even the lobby carpet. (Photo courtesy of the Los Angeles Public Library Photo Collection)

“The ‘80s were bad for our hotel,” says Pineda, who adds that the tile in the Spanish Colonial lobby of the main tower had at one point been blanketed by carpet and the original paintings on the ceiling, now restored, had been covered up. In the 1990s, he says, the lobby felt more like a Greyhound bus station than what he now calls “the heart of the hotel.”

After the Thompson Hotel Group bought the Hollywood Roosevelt in 2005, the property underwent yet another makeover, this time reemerging as a paparazzi-mobbed tabloid fixture. Over the next decade, there were as many frequent appearances by celebrities like Lindsay Lohan and Paris Hilton—who made Tropicana Bar and Teddy’s nightclub (named for President Roosevelt) their own personal playgrounds—as there were by ambulances, paramedics, and the LAPD. The hotel was redecorated with dark colors and rock n’ roll accents, according to Pineda, and noise complaints were rampant—so were allegations of drug use on the property (It didn’t help that Courtney Love at one point was ushered out on a stretcher).

The hotel changed its management once again in 2015, undergoing a $25 million renovation aimed at shedding its hard-partying image and restoring its 1920s charm. The walls and ceilings of the rooms have been padded with soundproofing, the Tropicana Bar has ceased throwing its infamous ragers —the pool is now open only to guests and those who buy an exclusive membership— and Beacher’s Madhouse, the decidedly un-P.C. burlesque show dubbed “L.A.’s craziest nightclub” by the Daily Beast, recently ended its nearly seven-year run. (Pineda says he can’t yet reveal the new venture set to take its place, but he seems pretty excited about it.)

This month, the Hollywood Roosevelt unveiled The Rosy Oyster, a new champagne and oyster bar by the pool. With its antique furniture and curated wine list, it’s just about the farthest thing from Teddy’s, which is now used as a private event space rather than a nightclub. But if it’s a late-night spectacle you’re after, there’s always 25 Degrees, a 24-hour diner that overlooks Hollywood Boulevard and offers people-watching opportunities as juicy as its Walk of Fame-inspired burgers. Grab a seat in Johnny Grant’s legendary booth—named for the so-called “Mayor of Hollywood” who lived and died in a penthouse upstairs—and enjoy the show. Some things in Hollywood never change.

Jennifer Swann is a freelance writer in Los Angeles.