Check Out This New Cereal Bar In Virgil Village 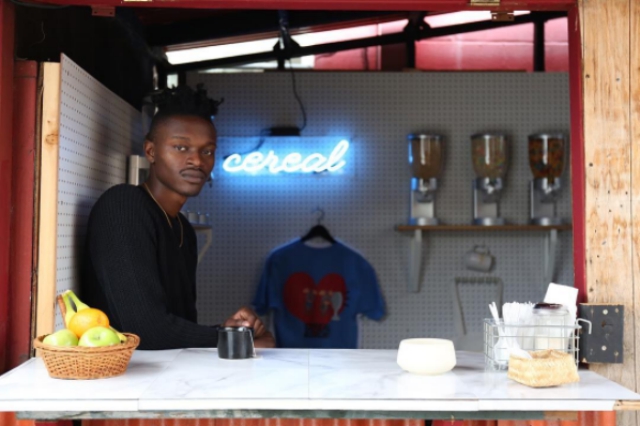 Virgil Village is looking to continue its unexpected rise as a breakfast hot-spot with the addition of Cereal and Such—a cereal bar which opened this month behind streetwear shop Virgil Normal. The cereal bar, which opened May 5, is just two blocks away from heavy-hitter SQIRL.

"We called it Cereal de Mayo," Theo Martins, the musician and artist who opened the cereal shop, told LAist about the shop's opening day. Martins is originally from Providence, Rhode Island, and moved to L.A. five years ago. "I always loved cereal, but my parents wouldn't let me have it as a kid, so I over-used it as an adult."

"I wanted to educate people on cereal being a really good snack, not just breakfast," Martins continued. "So, the concept was to reinvent the experience...Everyone finds their reason [with cereal] and brings their own story to it." And he's right, few things are more nostalgic and comforting than a bowl of Cinnamon Toast Crunch or Froot Loops.

Cereal and Such offers six cereals on rotation ("one will always be a vegan and gluten-free option"), along with pour-over coffee from Stumptown, and "tea is whatever I pick up from the farmers market in the morning." Martins added that, "as a musician, I'm always touring. So I'll be in Japan next month, and I'll pick up whatever cereal I find there. And I want to serve it the same way they do—using the same milk and everything."

Cereal and Such is currently open Tuesday through Sunday 11 a.m. to 6 p.m., but hours will expand through June and into summer. A bowl of cereal is $4 for two scoops—and yes, you can mix and match.

Cereal and Such is located at 4157 ½ Normal Avenue in Los Angeles.

i never want anyone to feel like they can't be apart of something because of their circumstances. only reason why i do it. i'm just creating a space for me as a kid. somewhere where i can be goofy and sad and happy. where i can dance and feel okay being who i am. i know there are many who feel how i feel. @cerealandsuch is finally open and it's really cool to see a childhood idea come to life. come by when you're around, i'll see you then.