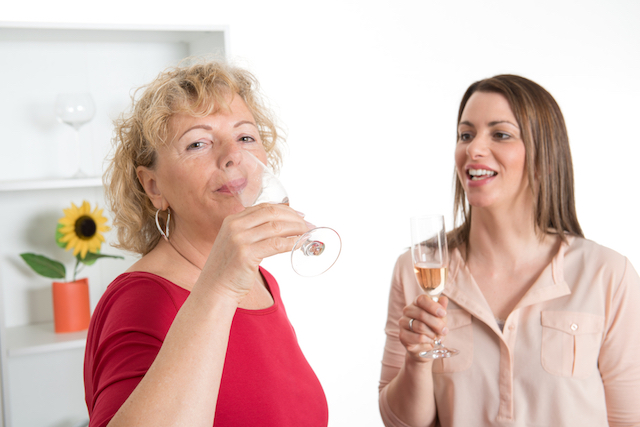 "This is for that time you puked on me at Chili's." (Photo via Shutterstock)

Check out our latest edition of Overheard in L.A. while sipping a few mimosas with momma.

Overheard of the Week
"For the first time in history, the French president will speak better English than the American president."

We’re so effing zen
"I've been meditating and chanting and shit like that."
via @johnMpicard

We wouldn’t know
"It's so exhausting being thin."
via @merib

This is more us
"I’m down to centaur weight.”
via @TedLNancy

Actually kind of a good question...
"I'm trying to figure out how to get rid of my smartphone but still use Instagram."
via @JonathanGormley

Sure, but sticking to Paleo is still really hard…
"Stress is having a spear thrown at your face while riding a horse.”
via @kariECswanson

Did we learn nothing from Big Little Lies?
"I need my kids to be alphas."
via @greg_barajas/

She’s not Christian
"I know, I totally believe in, like, the universe."
via @whitneydgibson

Speaking of…
"I shouldn't have a cocktail, I don't want anyone to smell it on my breath at church tonight."
via @_paul_briggs_

Semantics
"I thought for the longest time that I was a liar. Then I came out here and realized that I was an improviser."
via @JonathanFitts

A rare crossover
"I don't know anyone who knows how to read a screenplay who also doesn't suck as a person."
via @NateRuegger

Probably a line from What Happens at The Abbey
"Oh yeah you should really get back to your Job. Those glory holes aren't gonna fill themselves."
via @falvey_patrick

Taking environmentalism too far
"My friend has her own line of clothing that has solar panels sewn into it."
Submitted via George T.

Pretty much every L.A. news story when it rains
"Holy shit, it's fucking raining! Oh well."
via @KatVHarris