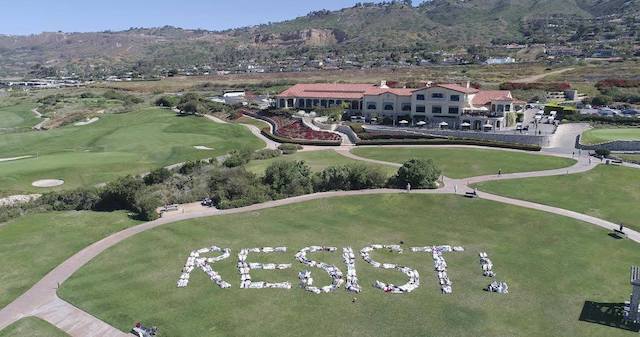 A flash mob of about 200 people used their bodies to spell out “RESIST” this morning on the Trump National Golf Club in Rancho Palos Verdes.

The protest took place between 9 a.m. and 10 a.m., according CBSLA. Although Los Angeles County Sherriff’s deputies showed up, no arrests were reported.

The stunt was held by Indivisible San Pedro, a self-described “a group of concerned citizens that realize the Trump administration's agenda will take America backwards, and must be stopped,” according to their Facebook page and group. Group member Peter Warren told CBSLA the protest was held to call for a special investigation into Russian influence on the 2016 presidential election.

This is just the latest protest at the course. In March, the golf course was vandalized with the message “NO MORE TIGERS, NO MORE WOODS” etched into the fifth hole to protest the Trump Administration’s handling of environmental affairs. Back in December, Black Lives Matter activists sang anti-Trump carols to brunching patrons at the course.