Mariachi Plaza has been a physical and cultural gathering point for mariachi musicians since the 1930s. As L.A.'s Boyle Heights neighborhood becomes a flashpoint in the city's gentrification wars, Mariachi Plaza is an increasingly symbolic space. Mariachi musicians, who have long lived in close proximity to the plaza and gathered there to be hired, are being rapidly edged out of the area, while community groups and activists struggle to protect against displacement and unreasonable rent increases.

According to Elizabeth Blaney, co-founder and executive director of tenants rights organization Union de Vecinos, there is a long and significant rich cultural history of mariachis being present in the area. "That's where all the mariachis go to look for work," Blaney explained over the phone a few weeks ago, "because you know that if that if you want to hire a mariachi, that's where you go." The neighborhood is also one of the most rapidly gentrifying areas in Boyle Heights. "We're starting to see a lot more harassment or purchasing right near Mariachi Plaza. And the mariachis tend to live along Boyle and Pleasant, so it's having a big impact on them," Blaney explained. 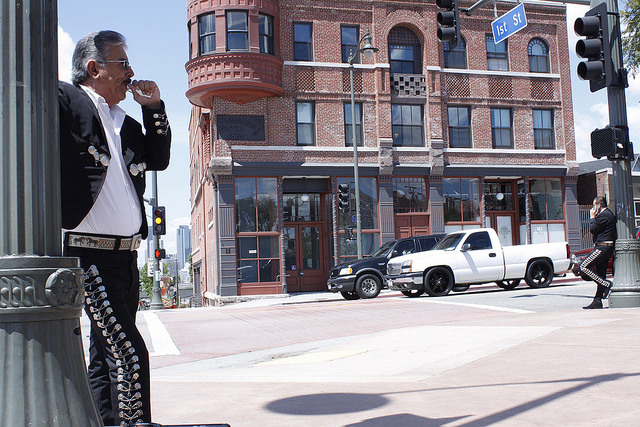 (Photo by Neon Tommy via the Flickr Creative Commons).

A few weeks ago, community activists protested the exorbitant rent hikes that the Crescent Canyon Management Company was demanding from its longtime mariachi tenants, some of whom had been living in the building near Mariachi Plaza for as long as 20 years. According to Blaney, the landlord raised the rent between 60 to 80% for the tenants, which equates to rent increases ranging from $500 a month to $800. "It's ridiculous. Nobody can pay that," Blaney told LAist at the time (because the building doesn't fall under the city rent stabilization ordinance, the landlord can technically raise the rent as much as he or she likes without it being illegal).

Now, despite the fact that, according to Blaney, there is only a single vacant unit in the 25-unit building (the rest are occupied by current tenants), management has created an elaborate new website for that same building, now dubbed the "Mariachi Crossing" apartments, and it is a thing to behold. As presented on the website, the Mariachi Crossing apartments appear to be pairing a sanitized, EPCOT-like version of the neighborhood's cultural fabric with the clean lines and pale wood of mass-produced midcentury modern furniture to rent apartments to young professionals. Based solely on the website's sparse, san-serif text, Boyle Heights (one of L.A.'s oldest neighborhoods and, along with East L.A., the longtime heart of the city's Chicano culture) is an excellent place for being close to other places. Mariachi Crossing is "only 5 minutes to the Arts District and 10 minutes to DTLA" with "convenient access to the 5, 10 and 60 FWY."

Above all, the place that Mexican vihuela player Victor Garcia once described to the L.A. Times as "our home base... the womb of all the mariachis in the United States," is, according to the Crescent Canyon Management Company, "an ideal central location for commuters or those who take the metro to work."

The apartments are newly renovated with brand new vinyl plank faux-wood floors, all new stainless steel appliances, remodeled kitchen and bathroom, a dining room, a large closet with mirrored sliders and expansive bedroom space, according to the Craigslist listing which also includes three pictures of cacti. Rent for a 450 square-foot one bedroom "boutique apartment" is $1,650. A quick Craigslist search showed that nearby one bedrooms rent for between $1100 and $1500. 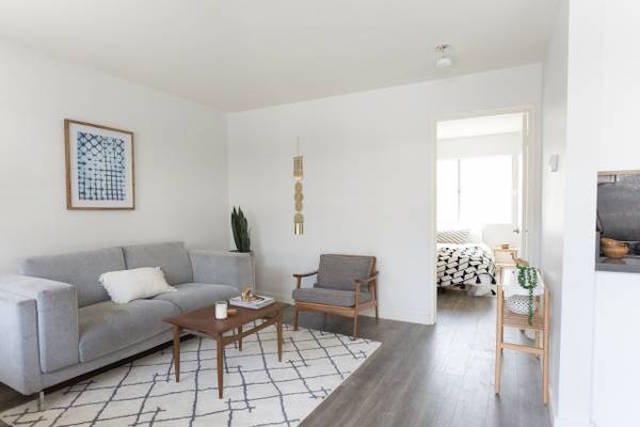 The Mariachi Crossing website also boasts of "a colorful community" where "you can easily eat at a new restaurant every night for months without repeating yourself."

"It's pretty surprising," urban planner and community activist James Rojas told LAist. "It's the cultural appropriation of a symbolic landmark in the community to really exploit displacement and gentrification," he explained. As a scholar of Latino urbanism, Rojas is one of the few nationally recognized urban planners to examine U.S. Latino cultural influences on urban design and sustainability in recent years.

According to Rojas, the vision presented in the Mariachi Crossing website "is all about the city as consumption, not as production."

"Mariachi Plaza is a place of cultural production and it has been for decades," he explained, referencing the area's celebration of the productive working-class landscape. "And now it's just being seen as a place of consumption. You know, where you just consume these kinds of restaurants and culture and food and the environment. It really kind of switches the community from a landscape of production, where everybody is part of that production cycle—the mariachis, their families, their kids, the vendors—all the different elements that produce Latino culture are really tightly knit. All the components need each other. The mariachis need the affordable rents. They need the place to hang out. They have vendors there, and the vendors follow them. It's a very organic, homegrown, kind of sensitive landscape of the city. When you start to tear it apart, bit by bit, it just disappears."

"The wave of change is really powerful, and it's going to be like a tidal wave hitting the community," Rojas said.