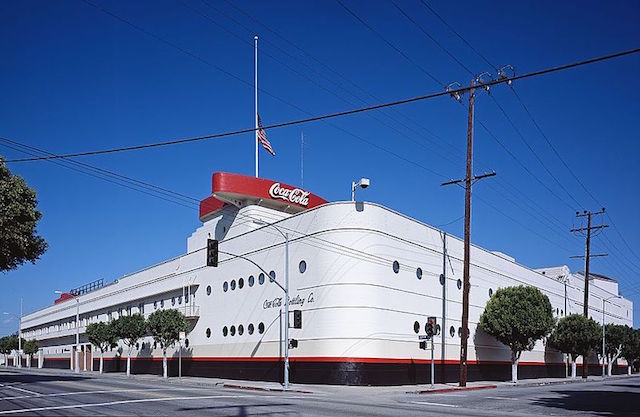 COCA-COLA BUILDING
The Coca-Cola bottling plant downtown is probably L.A.’s most famous maritime inspired building. Built in 1939 by architect Robert V. Derrah, the Streamline Moderne masterpiece was designed to resemble an ocean liner. The theme continues inside, where there are metal railings and doors with portholes.

The Coca-Cola Building is located at 1334 S. Central Avenue in downtown Los Angeles 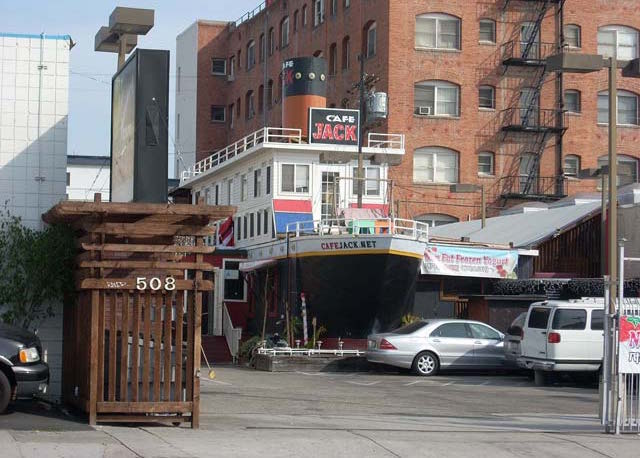 Cafe Jack. (Photo by Chris via the LAist Featured Photos pool on Flickr)

Located in the heart of Koreatown, this restaurant is meant to look like the Titanic. Originally opened in 2007, the café is a tribute to the 1997 James Cameron blockbuster and is named after both Leonardo DiCaprio’s character and owner Jack Shin. In a 2012 L.A. Weekly profile, Shin claimed he’s seen Titanic “hundreds” of times. The Titanic theme continues inside with vintage furniture and framed photos from the film.

Café Jack is located at 508 S. Western Avenue in Koreatown. 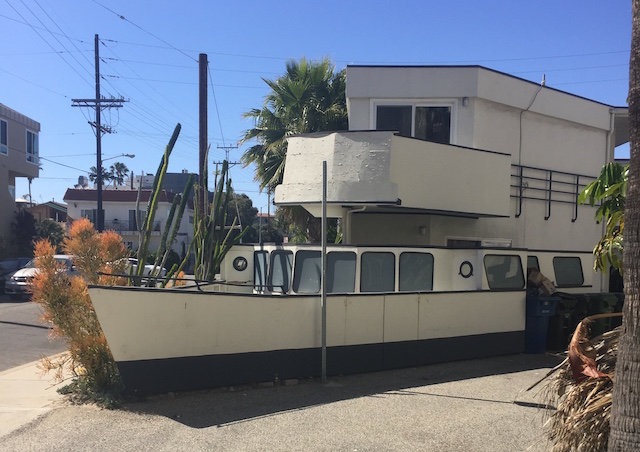 The Boathouse (Photo by Michael Darling)

Locally known as “the boathouse,” this four-unit apartment building in Marina Del Rey near the Venice Canals was built in 1966. The boat façade houses a small enclosed patio. Shipstyle railing along the second floor adds to the nautical feel.

The Boathouse is located at 3906 Pacific Avenue in Marina Del Rey. 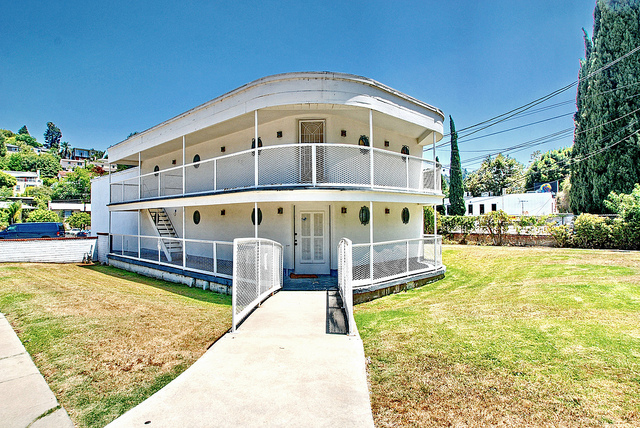 Evangelical preacher Paul Myers found religion while working on the San Diego docks, so he paid tribute to the site of his conversion by building this ship-shaped building in Silver Lake in 1941. It even has a boarding bridge! Myers broadcasted his Haven of Rest ministries from the Good Ship Grace and it eventually became a recording studio for the church’s gospel quartet known as the “Crew of the Good Ship Grace.” In 1998, Haven of Rest moved to Riverside and the studio was purchased by production duo The Dust Brothers who converted it to a state of the art recording studio. In 2010, the property was purchased by Red Hot Chili Peppers bassist Flea. 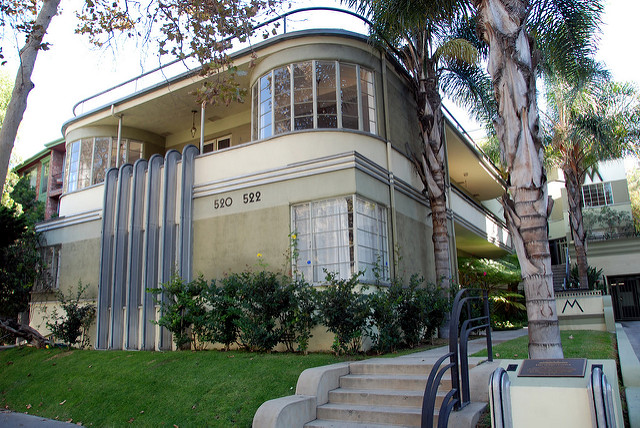 While this Art Deco gem in Hancock Park doesn’t have the most obvious nautical design elements, its name makes its maritime origins clear. Built in 1934 by architect Milton J. Black for actor Jack Haley, The Wizard of Oz’s Tin Man, the name pays tribute to the famed ocean liner RMS Mauretania, a ship which was retired from service just as the apartment building was completed. President John F. Kennedy rented the penthouse apartment during the 1960 Democratic National Convention in Los Angeles.

The Mauretania Apartments are located at 520-522 N. Rossmore Avenue in Hancock Park. 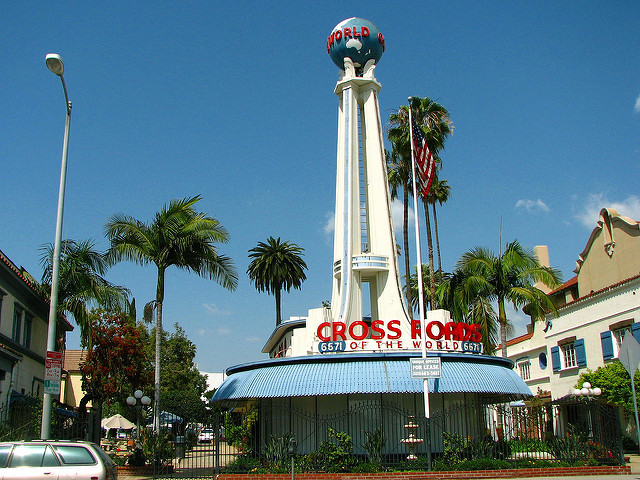 CROSSROADS OF THE WORLD

When Hollywood’s iconic Crossroads of the World opened in 1936, it was the nation’s first outdoor mall. Designed by Robert V. Derrah (architect of the Coke Building), the complex features small bungalow shops designed to resemble different international architectural styles, with a faux ocean liner in the centered. The mall’s original concept was to feature a permanent world’s fair style environment, but now the complex is mostly office space.

Crossroads of the World is located at 6671 Sunset Boulevard in Hollywood. 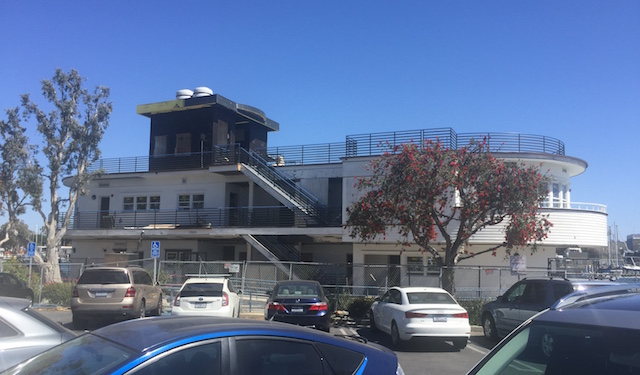 PARDEE SEA SCOUT BASE/ "THE BOATHOUSE"

Unlike any of the other boat buildings featured in this article, this one is actually on the water. Designed by architect Weldon J. Fulton in 1975, the former Pardee Sea Scout Base in Marina Del Rey’s Burton Chace Park served as a meeting place and boating site for local Boy Scout and Sea Scout troops. The Los Angeles County Department of Beaches and Harbors took over the property in 2002, renamed it The Boathouse, and have used it for lifeguard training and boating education programs for children. The Boathouse is currently undergoing refurbishments to modernize it. 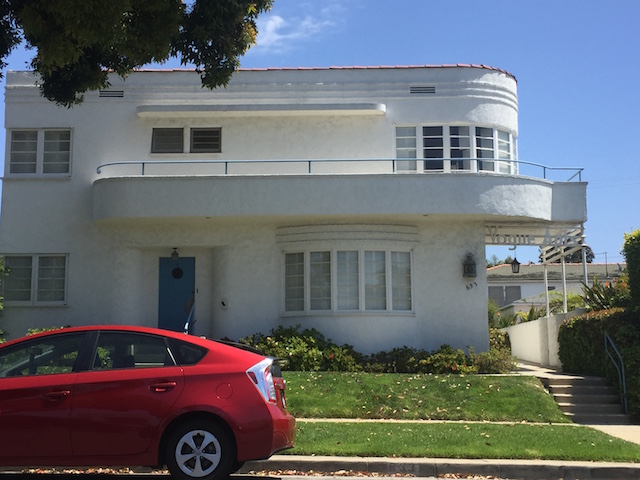 Built in 1937 by architect G. C. McAllister, this classic Streamline Moderne apartment is a perfect example how buildings that aren’t explicitly nautical still carry the influence of boats and ships. The circular window on the front door, big metal letters, smooth curves and even an old fashioned lantern are all maritime inspired design touches. You’ll spot these and other elements in many of Los Angeles’ classic Art Deco buildings.

Vogue Apartments is located at 633 9th Street in Santa Monica.

Michael Darling is a Los Angeles based freelance writer and editor; he is a contributing writer to the Los Feliz Ledger and former staff member of the Los Angeles Times Magazine. Follow him on Twitter.