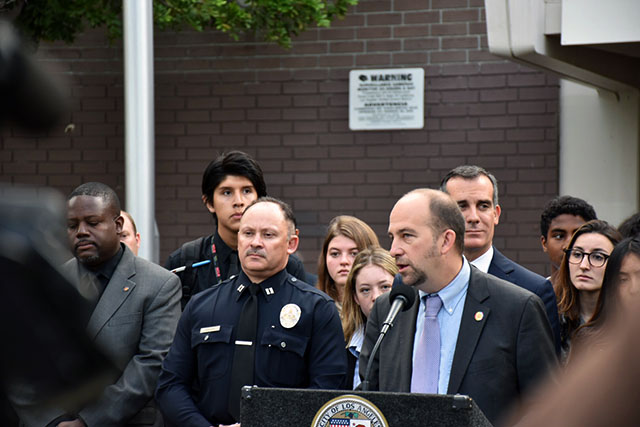 The Los Angeles Unified School Board has doubled down on its commitment to making all schools in the district "safe zones." A resolution passed unanimously by the school board during its meeting on Tuesday approves a set of policies protecting LAUSD students, their families, and district staff from federal immigration enforcement officials.

“This resolution makes me even prouder to be part of the L.A. Unified family,” Board President Steve Zimmer noted in a statement. “Today, we send a clear message to the White House: We will not cooperate with any form of immigration enforcement actions of this administration. But, we send a clearer message to our L.A. Unified students and families: Every L.A. Unified school is safe for every child and every family. We stand with you and we stand with your dreams."

According to a press release from the district, the resolution instructs Superintendent Michelle King "to develop a plan within 90 days that will train teachers, administrators and other staff on how to quickly respond to ICE agents." Furthermore, federal immigration agents will not be allowed on LAUSD campuses without clearance from district lawyers and the superintendent. Finally, additional resources including a rapid response network and immigration liaisons (those with "expertise in immigrant and undocumented populations") with be made available to staff and families alike.

"The resolution is not the news. The news is that we, the CASAS [California Schools Are Sanctuaries] coalition, can stand together with LAUSD and go to other schools and ask them to join us," Ricardo Mireles, founder and executive director of Academia Avance, a charter public school in Northeast Los Angeles, told LAist. Mireles is a founding member of CASAS, and his Academia Avance (which, as a charter school, doesn't fall under the LAUSD umbrella) signed on to the amicus brief earlier this year in the case of County of Santa Clarita v. Trump, which ruled against the administration's plan to withhold federal funds from "sanctuary" cities.

This month's resolution reaffirms one passed by the Board in February 2016. The resolution included language directed at then-President Obama.

In November, shortly after the presidential election, Mayor Eric Garcetti met with top LAUSD officials to announce the District's commitment to maintaining its schools and campuses as safe zones. Then, in December, LAUSD launched an immigration hotline.

“This is an important opportunity for LAUSD to be a model for the state and for the nation,” Sylvia Torres-Guillén of the ACLU of California said, reports the Los Angeles Times.

“Our students and parents are currently living in fear every day,” Dr. Ref Rodriguez, a School Board member, noted in the District's statement on Wednesday. “This resolution is our commitment that fear stops at our school doors. When our students and families come to our schools, they are in safe havens.”

“I am happy this resolution got passed," Fatima Avelica, whose father, Romulo Avelica-Gonzalez, was detained by ICE in February while dropping his daughters off at school, added, "because I don’t want what happened to me and my family, to happen to any of my friends.”