Behold, The Wilshire Grand Is Lit! 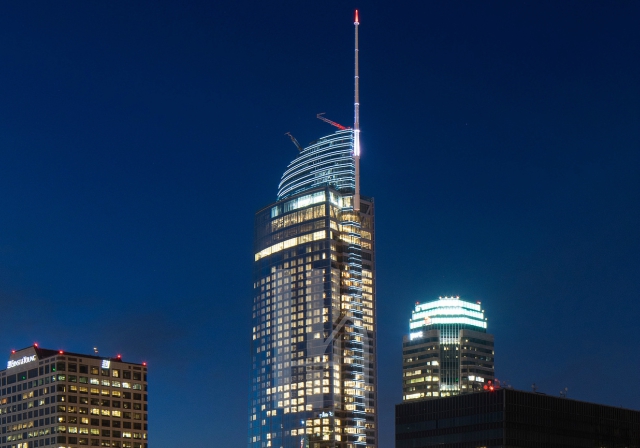 The Wilshire Grand Center was alight in full glory Monday night—from the tip of its 1,100-foot spire, through its translucent crown, and down the spine of its body. The tower's sleek profile glowed indigo, gold, fuchsia, neon green, and sky blue for viewers throughout downtown and into neighborhoods beyond. The light show was ostensibly a test, though, as Urbanize LA reports.

What's also cool is that, in support of the LA2024 Olympic bid, the Wilshire Grand will glow in the colors of the L.A. sunset Tuesday through Thursday night, lighting up in conjunction with the U.S. Bank Tower, Walt Disney Concert Hall and the Los Angeles County Museum of Art (it's absolutely no coincidence that the IOC evaluation commission will be in town the same days).

The Wilshire Grand is the tallest building west of the Mississippi. The 73-story, $1.2 billion building is slated to open in June with a 900-key InterContinental Hotel, 395,000-square-feet of office and retail space, and (hey!) a rooftop bar.

Wilshire Grand will light up the skyline like no other west coast building before. For more images check out the latest post on @urbanize.la