Father's Office Is Taking Its Delicious Burger To The Arts District 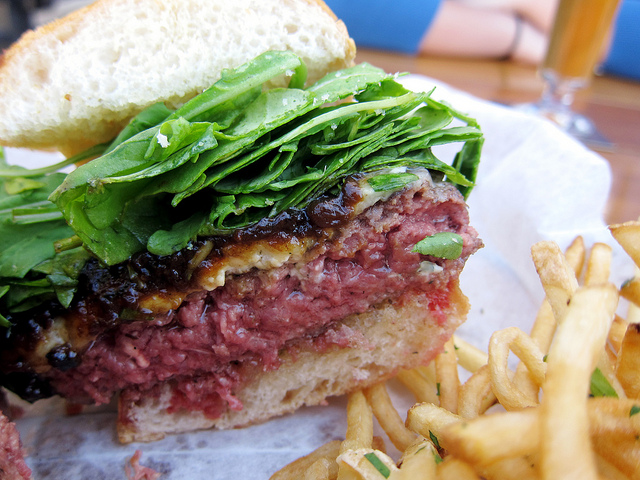 (Photo by Felicia via the LAist Featured Photos pool on Flickr)

New burger options may cropping up on a weekly basis, but the "Office Burger" at Father's Office still manages to hold its own. Now, it'll be making its way to downtown's Arts District.

Chef Sang Yoon, who also helms the much-lauded Lukshon, told the L.A. Times that he was lured by the Arts District's... cozier vibes? "The Arts District to me feels very much like a neighborhood within an urban city,” said Yoon.

There's no set date for the arrival of Father's Office, but Yoon anticipates that it'll be open around fall of this year. Eater LA also notes that architect Ana Henton will be designing the space, and that it'll come complete with a patio and a splash of greenery. The space will be situated in the Garey Building on 905 E. 2nd Street.

For the uninitiated, the first Father’s Office started in Santa Monica during the early aughts, with a second location opening at the former Helms Bakery in Palms in 2008. Public opinion on Father's Office is a little varied. It helped usher in a new age of gastropub-ification, which you might or might not think is a big deal. And Yoon is famously adamant that extra condiments (like ketchup) aren't allowed on his burger.

Whichever way you see it, the restaurant's flagship burger (the Office Burger that comes packed with caramelized onions, applewood bacon compote, arugula, and Gruyère and Maytag blue cheeses) is a glutton's dream. It's juicy. It's meaty. It's just good if you have any carnivorous leanings. And if you think we're being hyperbolic you should check out these "best" lists.

Not surprisingly, Father's Office won't be the only burger purveyor to hit downtown this year. Other newcomers will include, yes, a Shake Shack location on the corner of Hill and 8th streets.