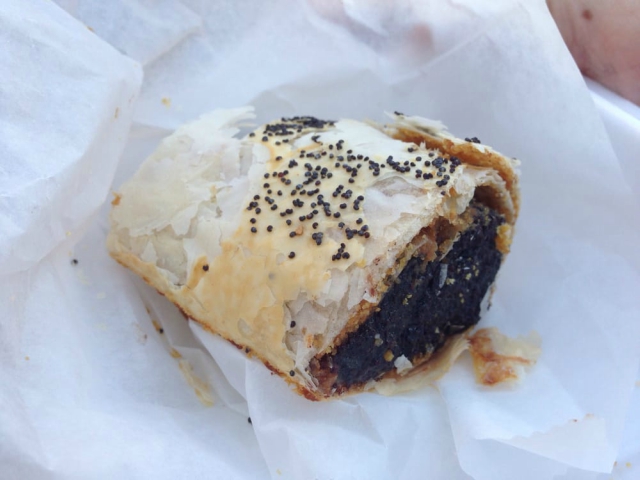 It's amazing to think that babies feed off nothing but milk for the first few months of their lives, all while growing skin and bones and veins and hair and an entire body at a rapid rate. That milk truly is them. If you are what you eat, then, for infants, it is true in a very singular way.

All this is amazing to think until I realized that the poppy seed strudel at Canter's makes up a significant portion of my own physical make-up. I've been going to Canter's since before the age when I began producing declarative memories. And at some point in there (most likely thanks to my mother) I had the poppy seed strudel for the first time.

Poppy seed filling can be rendered overly-sweet at the hands of certain bakers. In other variations, raisins or various nuts are added to the mix. At Canter's, the poppy seed strudel's filling is grainy, sweet, and has just the right cut of that dark, nutty poppy flavor. Moreover, while some strudels are made with a soft, spongy dough, Canter's uses a flakey, thin phyllo dough.

The strudel is prepared in a long, almost log-like form, so prices depend on what size cut you order. I usually hold my index finger and thumb about two-inches apart when I tell my server "about this much," and it runs me about $5. For maximum impact, pair a slice of the dessert with a cup of coffee and take your time people-watching in Canter's main dining room—it's one of the best places in the city to do so.