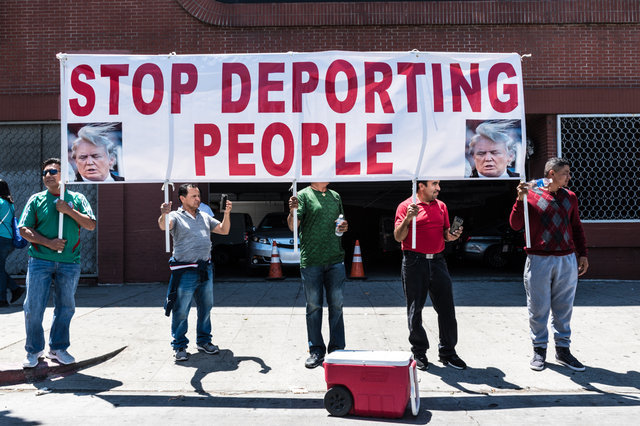 Demonstrators at the 2017 May Day rally. (Photo by Julia Wick/LAist)

For nearly two years after he arrived in the United States from Guatemala as an unaccompanied minor, Carlos* never saw an immigration attorney, including during an eight-month stint at a border detention center.

By the time a group home in Los Angeles connected him to an attorney, it was too late: He already had a final order of removal from the United States.

“When the lawyer told me I had that, I was so scared,” Carlos said. “Because my plan was to be here—to make something of my life.”

Abandoned and neglected by their families, undocumented foster kids—often without legal representation or the ability to speak English—are forced to navigate immigration and child welfare systems that can be every bit as traumatic as the fractured homes they left behind. 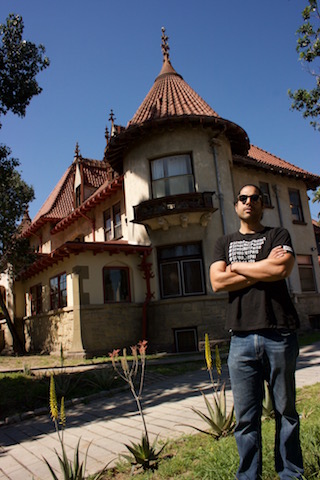 For undocumented foster children, the burden of being alone is magnified by the ever-present threat of deportation. It’s a threat that has become even more pronounced since U.S. Department of Homeland Security Secretary John F. Kelly issued new immigration directives on February 20.

And last weekend, in an ominous sign for undocumented former foster children like Carlos, Erik Javier Flores Hernandez, a teenager with a pending asylum claim who arrived in the United States as an unaccompanied minor, was taken into custody in Los Angeles on his 18th birthday, raising fears that a new wave of deportations targeting unaccompanied immigrant minors may be underway.

On paper, Casa Libre is indistinguishable from the network of group homes that shelter more than 24,000 kids in foster care in the United States. But it’s one of the only shelters in the country, according to Bustamante, that focuses on providing services for immigrant and refugee minors.

“We’re the only game in town,” Bustamante said.

For the past fifteen years, Casa Libre has operated out of a sprawling, turn-of-the-century Gothic mansion designed by renowned architect John Parkinson, an English immigrant whose contributions to the city of Los Angeles include City Hall, Union Station and the Los Angeles Memorial Coliseum. The shelter’s status as a historic-cultural landmark is not merely an anecdote—it reinforces the notion, says Bustamante, that it is a home rather than a “home.”

Given Casa Libre’s focus on undocumented boys, it is also a fitting addition to the MacArthur Park neighborhood, an area whose name has become synonymous with the West Coast immigrant experience.

But MacArthur Park also has a hard-to-shake reputation as a nexus of criminal activity and vice. 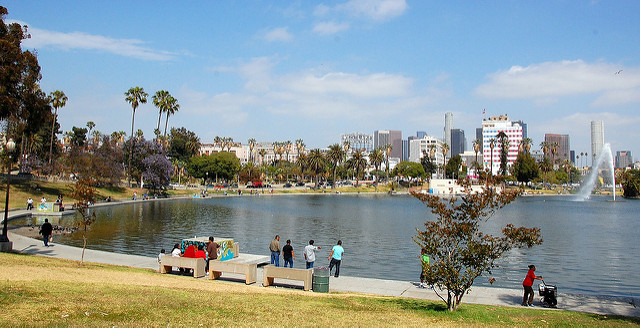 Although it has made tremendous strides since the 1990s, when violent street gangs openly peddled drugs and fake IDs around a man-made lake that was rumored to contain more bodies than bass, the park remains a study of contrasts—its manicured soccer fields bounded by a sprawling web of homeless encampments.

There is also a cruel irony to MacArthur Park: MS-13 and the 18th Street gang, two of the driving forces behind the endemic violence that has forced tens of thousands of Central Americans, including many of Casa Libre’s charges, from their home countries, were formed mere blocks from the shelter.

“Some of these hoods are worse than the ones they come from,” Bustamante said. “It’s out of the frying pan and into the fire.”

In 2012, at the age of 17, Carlos left his parents in central Guatemala and set out for the United States. He wasn’t abused, he says, but as the youngest of seven children, his parents could no longer afford to support him. 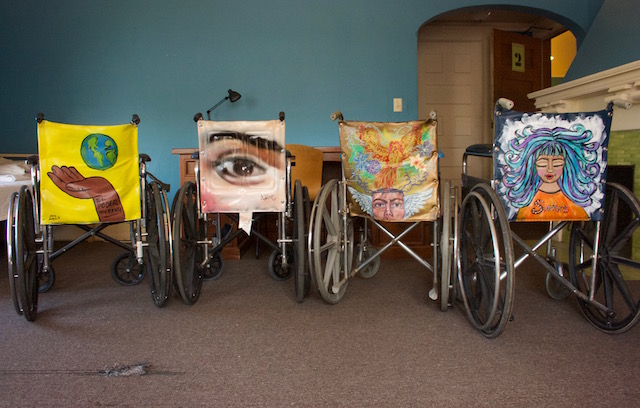 A collection of artist designed wheelchairs in Casa Libre. The project pays homage to the many migrants who have lost legs aboard “La Bestia,” the notorious freight train that has shepherded thousands of Central Americans through Mexico. (Photo by Bret Schafer)

For three months, he travelled with friends across Mexico, at times on foot but often aboard the notorious La Bestia (The Beast) freight train. Without food or money, Carlos and a friend somehow managed to make it to the U.S. border. Once there, they faced another obstacle: a river crossing. Barely able to swim, the boys waded through the murky water until the river bed gave way beneath them.

Carlos made it across. His friend didn’t.

Lost and alone, Carlos would spend the next three days without food or water in the New Mexican desert. One night it rained.

The next night, spooked by howling coyotes, Carlos tried to make his way through the desert in the dark. His journey ended when he ran into an electrified fence. The shock blew him off his feet and left a permanent scar on his chin.

“I call it his Marty McFly moment,” quipped Bustamante, referencing the opening scene of Back to the Future, when Michael J. Fox’s character is blown across the room after striking a chord on an over-amplified Gibson guitar. “I tell him, if you don’t add some humor to the story, there’s no way to tell it without spending the next three hours crying.”

By Carlos’ count, he cheated death on at least three occasions before border patrol agents apprehended him. He spent the next eight months in a detention facility in Texas, before being reunited with an older brother in Los Angeles.

But things quickly soured with his brother, who pushed Carlos to quit school and start working. Struggling to make sense of classes in a language he could barely understand, Carlos came close to following his brother’s advice on numerous occasions.

“Sometimes I thought, ‘What am I doing here? I’m wasting my time because I don’t know what they’re talking about,’” he said.

But Carlos persevered, and a sympathetic school counselor at a Los Angeles high school finally put him in touch with Casa Libre. There, he found a surrogate home and the services he needed. But by that time, he was already over 18—too old to be considered a ward of the state, making it impossible to apply for legal permanent residency under a visa provision known as Special Immigrant Juvenile Status (SIJS).

Enacted by Congress in 1990, SIJS provides a pathway to legal permanent residency for dependents of the state who cannot be reunified with one or both parents due to abuse, neglect or abandonment, and for whom a return to their country of origin is determined to not be in their best interests.

“It’s the most generous form of relief I know of in the world,” said Lenni Benson, a professor of law at the New York Law School and the director of the Safe Passage Project, a non-profit that provides pro-bono legal representation to unaccompanied immigrant children.

But a backlog in SIJS petitions translates to waiting times that can stretch back years, particularly for children from the Northern Triangle countries of El Salvador, Honduras and Guatemala.

“The problem is when we’re using SIJS as a child protection law analogous to asylum, where there is no quota, the demand creates an unintended consequence of delay,” Benson said.

Delays aren’t the only problem. Despite an expansion of the law in 2008 to include many of the unaccompanied migrant youth apprehended at the border, thousands of eligible children remain undocumented because they either never receive legal representation or, as in Carlos’ case, the help comes too late.

“The government doesn’t have a real role in that [getting children legal representation],” said Christopher Elmore, a Chicago-based immigration attorney and a board member of the non-profit Volunteer Immigrant Defense Advocates. “The Office of Refugee Resettlement cares less about getting children an attorney and more about making sure the government is following guidelines.”

Once a juvenile receives a removal order, their options, even if they later obtain an attorney, are limited.

“They can try to appeal and get the case reopened to present an asylum claim - which is an uphill battle for sure - or ask for a stay,” Elmore said. “But I don’t know the likelihood of that in today’s climate.”

Although many SIJS-eligible children do not go through deportation proceedings, transitioning to adulthood without securing permanent legal residency has its own adverse consequences. As undocumented adults, their educational and employment options narrow considerably, forcing them into the shadow economy.

“One time I worked all day outside and the guy never paid me,” Carlos said. “That was horrible.”

Although Bustamante acknowledges the importance of securing legal status for the youth at Casa Libre, he cautions that a green card is not a panacea for the problems facing immigrant foster children.

“If you get a kid a green card but don’t teach him how to fill out a job application - what’s the point?” he said. “You’re just creating a documented Home Depot force.”

“When people ask me, what the biggest obstacles are, I say there’s two: wrong perceptions and low expectations,” he said.

The shattering of stereotypes starts with Bustamante himself. In a profession often dominated by institutional cynicism on one end and naïve idealism on the other, Bustamante is a rare exception - a clear-eyed realist with an unshakable belief in his kids’ ability to succeed.

“These kids come in on a different scale,” he said. “If we measure them on a K-12 scale, we’re missing out on fucking geniuses, bro.”

Bustamante’s speech is often laced with profanity and punctuated with California slang, lending his observations a level of accessibility and credibility, particularly with the kids in his care.

“When I want something to stick, I’ve got to give it to them double-dirty,” Bustamante said, with a nod to George S. Patton. “If I give it to them nice and polite, forget it. They’re coming from a hard world.”

Today, Carlos is a month away from graduating from a Los Angeles’ area high school. At 22, he’s one of the few kids who has taken advantage of a rule allowing ESL students to stay in school until their 23rd birthday.

Although he’s several years older than most of his peers, Carlos’ accomplishment needs to be considered in context: He entered high school at 17 speaking only K’iche, an indigenous Guatemalan language, and a smattering of Spanish.

On top of that, he has had to work to pay the rent of an apartment he shares with a nephew. Most days after school, he rides the bus more than an hour from MacArthur Park to the tonier community of Westwood, where he works as a busboy. His shift ends around midnight or later, meaning he often doesn’t get home until 2 a.m. If he’s lucky, he gets four hours of sleep before waking for school.

“It’s not enough. But I know life is not easy,” Carlos said.

Friendly and outgoing, Carlos is a natural conversationalist despite his limited grasp of English. But on one topic, he grows silent. When asked what he’ll do if deported to Guatemala, he just shrugs.

Last year, Carlos was offered a glimmer of hope. California passed Assembly Bill 900, which extends existing guardianship for unmarried immigrant youth until 21 years of age, allowing 18- to 21-year-olds to complete the SIJS process.

Without any viable legal options to stay in the country, Carlos is living on borrowed time. His final order of removal means that on any given day he can be apprehended and deported by Immigration and Customs Enforcement, despite having never committed a serious crime.

But for now, Carlos' plan is to finish high school and to attend community college. His dream is to one day become an immigration attorney.

“That’s what I want in my life,” said Carlos. “I want to help people like me, who are in my situation.”

*The young person’s name was changed to protect his privacy.

This story was co-published with The Chronicle of Social Change.