What's More Cult-y, Brunch At Cafe Gratitude Or Brunch At The Scientology Restaurant?

Los Angeles welcomes all forms of worship, from Buddhism to Santería to the Almighty Church of Goop, but the one ritual that enthralls true believers and atheists alike is brunch. The midmorning meal is held sacred in the City of Angels, with weekend worshipers making the pilgrimage to Sqirl and Eggslut to pay homage to the gods of avocado toast. Last weekend, I set out to solve the ultimate L.A. brunch conundrum: which is "cultier," the $15 all-you-can-eat buffet at the controversial Church of Scientology's Renaissance Restaurant, or a $30+ vegan, plant-based meal at Venice's venerable woo-woo mainstay Cafe Gratitude? 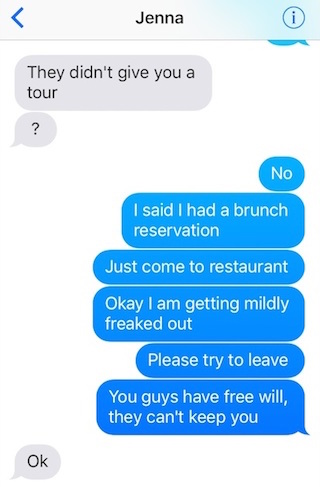 I showed up at the Church of Scientology "Celebrity Centre" in Los Feliz on a sunny Saturday morning, feeling scared sh*tless a tad apprehensive. The 2015 anti-Scientology documentary Going Clear was on my mind, as was the haunting "To My Loved Ones in Scientology...Call Me" billboard I drove past daily in Echo Park. I felt reasonably confident in my sense of self, but still... what if my innocent investigative trip to the Renaissance Restaurant ended with me abandoning my friends and family for a life in Sea Org?

My anxiety mounted as a very attentive Church representative escorted me through the Celebrity Centre's lush garden and tastefully appointed lobby, only to find no sign of the two friends who'd agreed to meet me at the restaurant. The spookily ornate splendor of the almost-empty dining room made me feel like I'd stumbled onto the set of a new Ryan Murphy show in pre-production; to distract myself, I chatted with the hostess, a friendly young woman so set on talking me through the Celebrity Centre's unique architectural history, she didn't notice me covertly sending a series of increasingly panicked texts to my friends (see evidence below).

When my friends finally joined me, another beaming guide brought us to the brunch spread, which was as bountiful as the Yelp reviews had promised, with hot trays of deviled eggs, pancakes, sausage and salmon spilling forth from every direction. The amount of food seemed excessive, though, considering that with two exceptions (a sunburned man in a cowboy hat and a teenage girl picking at a plate of grapes), ours was the only table in use.

My friends and I filled our plates, steeling ourselves for the unexpected; would we have to sit through a pre-meal prayer service? Study L. Ron Hubbard quotes spelled out in syrup? What actually happened, though, was the most surprising thing of all: nothing. Nothing weird, that is. Our well-coiffed, slightly weary waitress chitchatted about the weather as we dug into our food, which turned out to be somewhat disappointing diner-type fare; rubbery eggs, limp bacon and watery fruit. Between the Renaissance Restaurant's over-the-top gilded decor, near-empty dining hall and wildly generous portions of "meh" food, it felt like we were brunching at an abandoned airport-lounge buffet in Versailles. Creepy? Perhaps, but at least nobody interrupted our mediocre meal to wax rhapsodic about Dianetics.

Renaissance Restaurant is located inside the Scientology Celebrity Centre at 5930 Franklin Avenue is Los Feliz. (323) 960-3222

"How are you feeling today?" breathed the willowy hostess who stepped forward to greet me at Cafe Gratitude. It took me a second to register the question, which I tend to associate more with a doctor's office than a restaurant, but then again, Cafe Gratitude is no ordinary restaurant. Originally founded in San Francisco in 2004, Cafe Gratitude has become the culinary epicenter of the booming L.A. health-and-wellness world; basically, if you've ever met a girl at a party who's really into crystals, you stand a solid chance of bumping into her again at Cafe Gratitude. The 100% vegan, plant-based restaurant's owners refer to their business as "sacred commerce", describing Cafe Gratitude to the Huffington Post as "a business that considers that we all are connected and that the only real win is the win-win" (which sounds something like what you'd get if you hired Deepak Chopra to ghostwrite your tech startup's pitch deck.)

My friends and I were seated at a patio table at Cafe Gratitude's Rose Avenue location and presented with menus that boldly proclaimed "I Am...", followed by a litany of affirmations (i.e. "Humble," an Indian curry bowl, or "Vivacious," kale chips.) "This feels like a lazy SNL sketch about L.A.," whispered one of my friends, an observation I quickly shushed—a white-clad, serenely beaming waitress was approaching our table, and I got the impression "Cynical" wasn't a popular option on the "I Am..." menu.

Our waitress repeated our orders back to us ("You are Luxurious, you are Serene and you're... Open-Hearted? Oh, no, I'm sorry, you're Grounded") before asking, "Would you like to hear the Question of the Day?" Of course we would. "What have you overcome today?"

It's a beautiful day for this #QOD. Feel free to share your response in the comments!

We pondered that question as we tucked into our entrees of cashew-cheese nachos and crumbled "coconut bacon", which were admittedly delicious, and not just for vegan food. We weren't the only ones giving the Question of the Day serious thought; the Cafe Gratitude patrons around us all seemed to be drinking the proverbial Kool-Aid with a side of turmeric milk and a shot of chlorophyll. Cafe Gratitude converts do not mess around, as we saw last April, when Cafe Gratitude's owners received death threats from angry vegans after reincorporating meat into their diets.

Cafe Gratitude is located at 512 Rose Avenue in Venice. (424) 231-8000 They also have locations in the Arts District and on Larchmont.

Final Cult Rating: The race was neck-and-neck, but ultimately, Cafe Gratitude won out in the "cult" department. Yes, the Renaissance Restaurant is owned and operated by the Church of Scientology, a highly suspect religious organization described by former members as an actual cult, but at least nobody there made me talk about my feelings when I was just trying to order a glass of orange juice. (No, Cafe Gratitude, I'm not "Hopeful" or "Lively"; I'm just thirsty.)