Silver Lake's Botanica Is A Testament To California Produce

If a restaurant is really just a story we experience through all of our senses, chapter one of Botanica, the new restaurant and market in Silver Lake, begins online. But before the beginning, the prologue, begins elsewhere: in Chicago.

Emily Fiffer and Heather Sperling, co-founders and co-owners of Botanica, spent years in Chicago in the online food world. Fiffer served as editor of Daily Candy (r.i.p) before leaving for London to train in restaurant kitchens. Sperling, meanwhile, was editor of Tasting Table before relocating to New York City to consult for food halls. In 2015, the two reconnected in order to start Botanica.

"We narrowed it down to New York or Los Angeles," Fiffer told LAist. "But New York is so oversaturated with restaurants, and it's so expensive to open there. One day we were at a farmers market in L.A. It was February and we were feeling these amazing fruits with our hands. It was 70 degrees. We knew that we had found our home."

And so, Botanica would be born in Los Angeles—Silver Lake, more specifically. Fiffer adds, "the first time we came to Silver Lake it immediately felt like home."

The idea for Botanica is grand: a three-pronged approach to engage with people in the widest possible way. Before a single table was ever set inside Botanica's Silver Lake Boulevard shop, a digital magazine was launched.

"We wanted to start sharing recipes to gauge response," Fiffer said. "A brick-and-mortar is not enough. The magazine is a way to connect beyond four walls."

"All the food we're serving in the restaurant will appear online. Nothing is secret, there is no proprietary information. We want to share," Fiffer confers. "Our dream was to have a home cook in Sweden find our recipes online, and then one day come visit L.A. and try our food in the restaurant."

The next chapter of Botanica, which soft-opened in restaurant form on May 3, plays out mainly around a table. The space's aesthetic is a sort of manicured minimalism. The white walls and nature-based decor set the mood for the meal about to be presented—one of lightly prepared vegetables, quality ingredients, and traditional flavors. 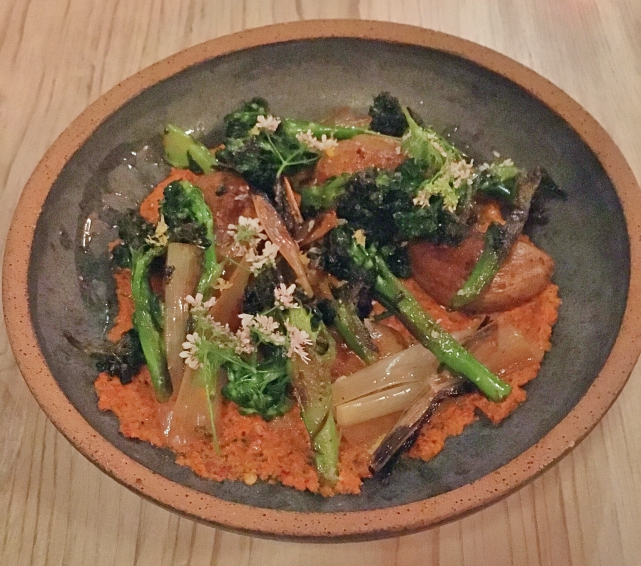 A dish of romesco (a Spanish nut and red pepper-based paste) and vegetables draws the nuance out from each ingredient. The romesco is rendered sweet with peppers, yet rich and complex with tomatoes and almonds. The broccolini is only slightly grilled, and coated with salt and lemon. The soft potatoes and charred leeks add further balance to the dish. A garnish of cilantro flowers brings a pop of bright white to an otherwise darkly colored plate of greens, blues, umber, and beige.

The "Fattoush-y Salad" is the perfect marriage of California's produce and Middle Eastern flavors. The greens are bright, the labneh is tart, the sumac-flavored bread ties the plate together with a savory finish. 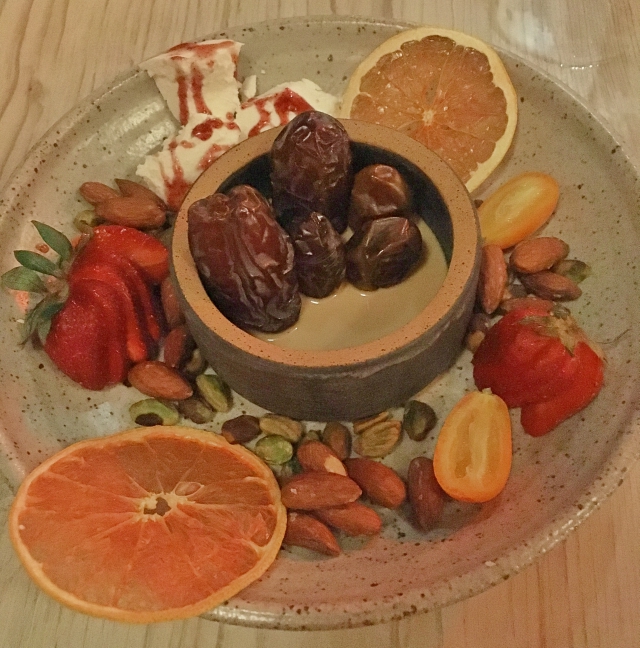 You would be wise to order the Southern California Delight for dessert. The spread includes fresh medjool dates with a tahini dip, salty Manouri cheese drizzled with some version of a honey-strawberry reduction, and pistachios, almonds, and sliced strawberries to boot. The mini-feast is as much a celebration of Southern California's natural pantry as it is a tour around the tongue and its taste receptors.

Attached the dining hall is Botanica's market. Here, you can buy prepared foods to take home, a bottle of organic wine, or any of the ingredients used from the menu. In addition, a barista serves up coffee drinks using Coffee Manufactory beans.

In the end, it only seems natural that Botanica would find its home in Los Angeles. The fruits and vegetables the restaurant serves and the lifestyle it promotes find their roots in California's rich soil. And if Angelenos tend to take the quality and bounty of our produce for granted, Botanica succeeds in elevating them once more.