Remember when people got ridiculed for collecting comic books and being total geeks? Those days are in the distant past, now that all our favorite superheroes have ascended from the pits of niche fandom to gain a broader appreciation (whether or not this is a good thing, it depends on who you ask).

While Wolverine and Spider-Man (and Ant Man?) have dominated the media at large, their real home is in a comic book, where the story panels are brought to life with word bubbles and an array of garish colors. The experience is singular; the pages have that distinct quality of being both sturdy and precious, evoking a sense that you're holding something important in your hands. And the sensation is that you really are partaking in a grand tradition of storytelling; the whole act of sharing and documenting and watching it get adapted by J.J. Abrams.

Certainly, comic geeks in L.A. have a healthy selection of stores to indulge their fandom. Here are some of our favorites in the city. 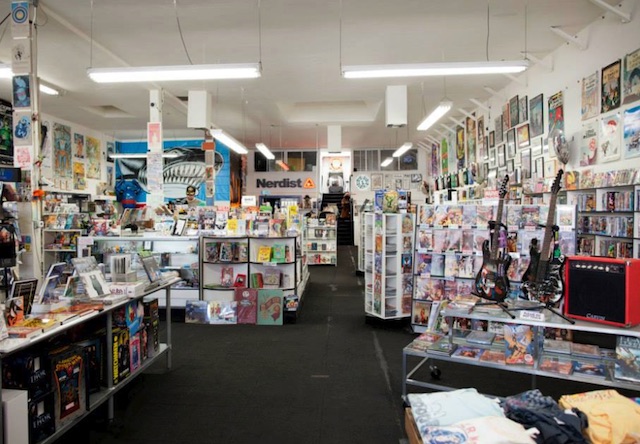 (Via Meltdown Comics and Collectibles/Facebook)

Meltdown Comics and Collectibles first opened its doors in 1993. Nearly a quarter of a century later, it's become a kind of institution. For starters, it has one of the most thorough selections of comics in the county, as well as shelves upon shelves of collectibles.

What really sets it apart, however, is the vast calendar of programming and events. Where to start? Its Nerdist Showroom hosts a variety of comedy shows, including the recently shuttered "The Meltdown," which spawned its own show on Comedy Central. The space was listed as one of our favorite comedy clubs in 2013. The store also presents an array of podcasts and blogs that expound on subjects that range from anime to dating (who says those two topics aren't compatible?).

And for those who are looking to put their own talents to use, there's "Meltdown University," a series of classes that teach you how to commit your ideas onto the page. 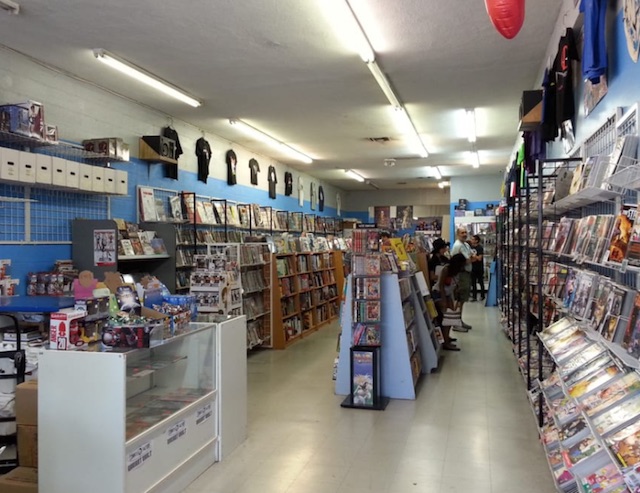 Comics Factory doesn't require a host of bells and whistles to sell its wares. It's a no-frills store that has a formidable library, a knowledgeable staff, and prices that are decidedly fair (for one thing, all the back issues are sold at cover price).

Also, the space has retained a cozy neighborhood vibe, reminding you of that one store that you used to plead with your parents to take you to. But, unlike that small store you used to frequent, the proprietors here are approachable and accommodating—as such they're a great resource for new generations of collectors. Whether you're a purist, or a newcomer looking to sink into the netherworld of fandom, Comics Factory will serve you well. 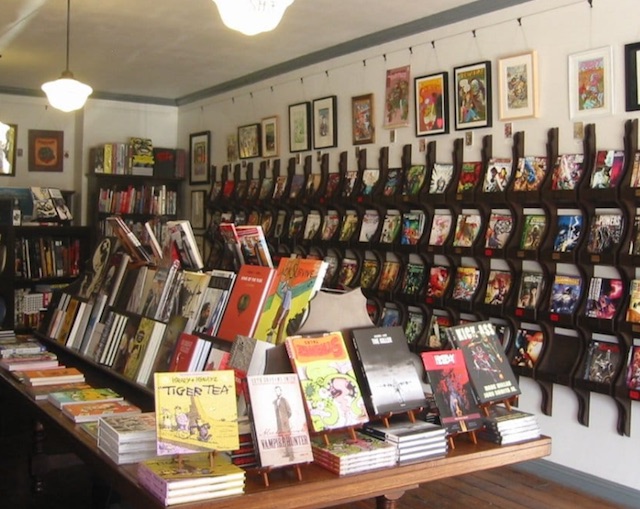 One may mistake Secret Headquarters as a shop that puts style over substance. The name is ingenious, and the interior feels like something out of an old-timey curio shop. The shelves are orderly in a painstaking way, but also look a bit sparse to the naked eye. And hey, where are the towering displays of toys and collectibles?

Herein lies the appeal of Secret Headquarters; they have singular focus on the latest comics, including graphic novels and manga. You won't have to navigate around the hulking stacks of back issues, and you won't run into a life-sized cutout of a Guardians of the Galaxy promotion. In this sense, Secret Headquarters is the furthest thing from posturing that you can imagine.

You would be mistaken (again!) to assume that the shop isn't a fun one. Aside from its library of comics, the space also hosts a series of signings and showcases. 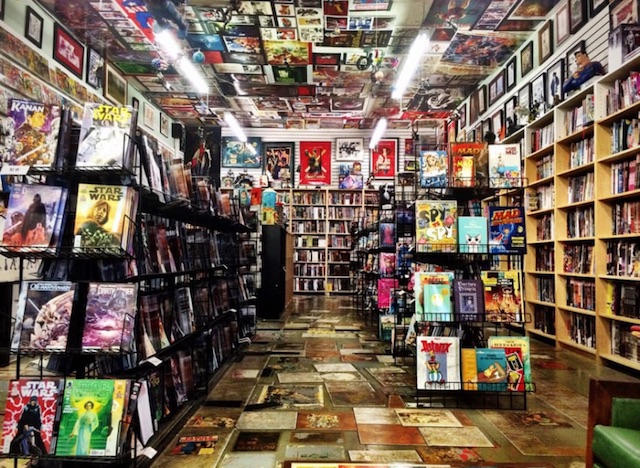 House of Secrets (Via Doug M./Yelp)

What better way to denote the size of your catalog than to plaster the walls, floors, and ceilings with comics?

It sounds like a mess, but the nifty trick at House of Secrets lies in how well-organized they are. Orderliness is a mundane topic, to be sure, but one that's so crucial to the experience of a comic books store; especially one that deals in both current-run titles and back issues, not to mention the wide array of collectibles that include figurines and framed art prints. If you can get a master's degree to work in a library, there's no reason to think that comic stores are less difficult to wrangle.

The store is also well-known for its lack of pretension. The staff is as helpful as they are knowledgeable—also vital when you're working with such a vast library. And did we mention you can sell your comics here? We know it's hard to let go, but it's time to cash in on your issue one Mary Worth.

This Melrose staple (it first opened in 1979) is a good bet if you're looking for something that runs the gamut. A solid selection of graphic novels? Check. Far-reaching catalog of back issues? Check. Various ephemera? Check and check.

What really sets the store apart, however, is the curated list of high profile events that feature writers, illustrators, and actors, among others. Past happenings included an appearance by none other than Stan Lee, and a book signing with Gerard Way (a.k.a the most LiveJournaled person on Earth) who had come out to promote his own comic, Doom Patrol. William Shatner and Glenn Danzig also showed up in past years. 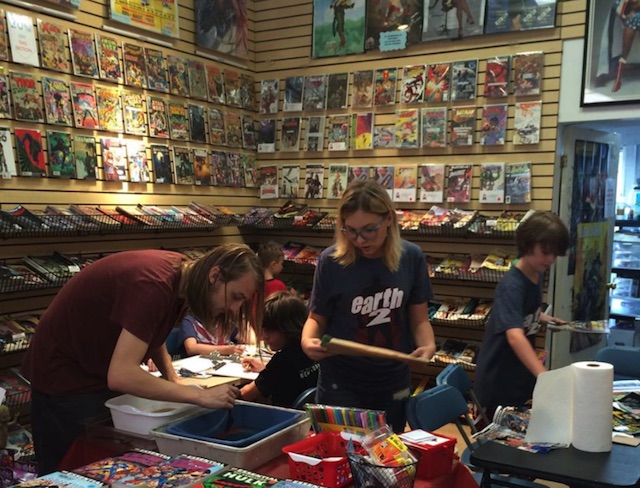 One of the difficult things about collecting comics is the sheer volume of titles. Aside from the major names and the off-shoots and the one-offs from the major publishers (Marvel, D.C., et cetera), there are also the offerings from smaller imprints (like Vertigo) as well as a cast of indie players. Which is to say that there are a lot of comics you could be reading right at this moment.

We're bound by certain restrictions, however, like time and money. And here is where Earth-2 excels: the staff is always good for a recommendation, narrowing down your picks and helping you leave without the faintest whiff of buyer's remorse. The staff covers the spectrum when it comes to their tastes, and they're more than accommodating. As such, Earth-2 is a great place to discover your next read. 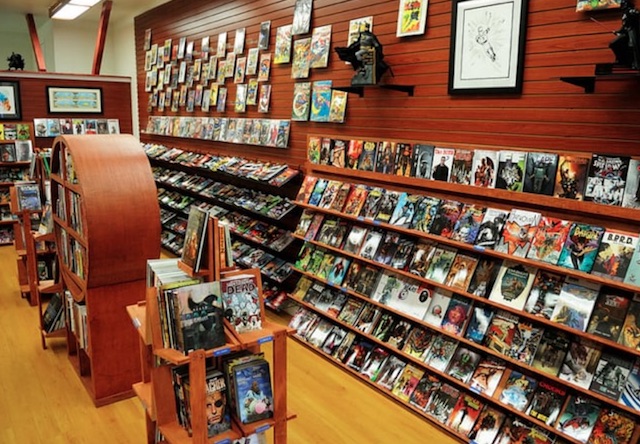 Blastoff Comics adds a touch of modernity to your memory of that hometown comic shop that you used to frequent. The space is modest, but also well-kept and easy to read.

And while the store can accommodate collectors of all stripes and needs, it should be a big hit with serious collectors, as the shop is known for its treasure trove of rarities. Got $18,000 to drop on the first-ever comic featuring Spider-Man? Or maybe a couple grand to spend on a copy of the fabled Adventure Comics? Likely, your wallet isn't deep enough to justify a purchase. At any rate, Blastoff Comics is a perfect place to fantasize about the dizzying heights of your geekdom.

Speros' is, hands down, the ultimate funhouse for the most serious of collectors. The shop makes a point of welcoming the uninitiated, but it really hits its stride with those who are incurably obsessed with comics.

Inside, you won't find a lot of eye-candy. In fact, what you'll see are shelves of boxes that are filled to the gills with comics. From new titles to comics that go way back, Speros' inventory is more than formidable. As the store mentions on its website, the inventory includes over 350,000 comics, with 25,000 of them priced and showcased to the public. And if they don't have something you want, like that forgotten Wolverine and Family Circus crossover (joking, it doesn't exist), they can place in a call to have it sent. This is the place to be if you're in the market for back issues.

There's nothing too fancy about Speros', but it represents the art of collecting at its highest form.