There's A New Poolside Oyster and Rosé Bar At The Roosevelt

As spring gives way to yet another hot, sweaty L.A. summer, the Hollywood Roosevelt Hotel is celebrating its 90-year anniversary by giving Angelenos sweet relief in the shade of summer season pop-up rosé-and-oyster bar. Tucked away behind the Roosevelt's famous David Hockney-painted Tropicana pool, the Rosy Oyster pairs crisp, hard-to-find rosés like Clos Cibonne and Chateau Minuty with sea-fresh, salty Wellfleet and Beau Soleil oysters that provide the satisfaction of a full meal, not just a fleeting appetizer. 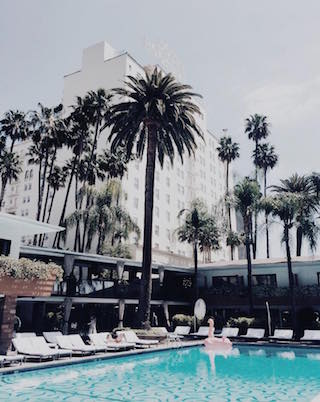 (Photo courtesy of the Roosevelt via Facebook)
The intimate, 35-seat restaurant is the brainchild of "model-turned-sommelier" Lelañea Fulton, who manages the tricky feat of serving up fine wines and fresh seafood without being pretentious about it. Fulton, who previously curated Wine Spectator award-winning wine list at New York's Dirty French restaurant, brought the pop-up's mismatched vintage glassware in from home, and its servers sport comfy, custom-made Stan Smith sneakers. "I didn't have my first oyster until my twenties," confessed one of the bartenders, nevertheless rattling off from memory a list of rotating daily varieties that include kimchi mignonette, rose champagne mignonette, horseradish and lemon.

The not-so-subtle theme of sexuality threaded through the Rosy Oyster's aphrodisiac-heavy menu of oysters and rosé is echoed in the bar's playfully naughty art. Israeli artist Amit Greenberg covered every square inch of the pop-up's interior with his signature cartoon nudes, as well as abstract depictions of body parts that invite speculation. "Is that a vagina?" one guest wondered aloud at Rosy Oyster's preview opening last week, staring intently at a small, almond-shaped sketch framed on the bar's wall. It very well might have been.

The Rosy Oyster starts serving at the Hollywood Roosevelt Hotel on May 2 and will be open every Tuesday through Saturday until October, from 6 p.m. to close. Seating is first-come, first-serve and they don't take reservations. Check out the menu here.