How A Radio Station Became Koreatown's Lifeline During The '92 Unrest 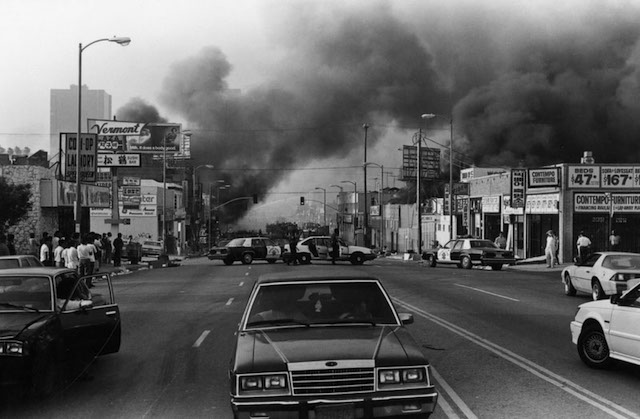 Vermont Avenue is closed off on April 30, 1992, as a number of stores are burning on the street. (Photo by Gary Leonard, courtesy of the Los Angeles Public Library Photo Collection)

The events of April 1992 were a portal into the soul of Los Angeles. The days of civil unrest highlighted decades of racial tension, harkening to the long history of police brutality that had hounded the black community. The riots exposed the city as a tenuous idea—a society that could be disrupted in a single wave of action.

It also brought the city's Korean-American population into the spotlight; formerly relegated to footnote status in L.A.'s history, Koreans were now presented at the forefront, if for the worst reasons possible. The riots were, to put it simply, devastating to L.A.'s Korean-American community. It was estimated that nearly half of all property damage pertained to Korean-owned stores (which were spread throughout Koreatown and South L.A.), and that less than a quarter of those stores would re-open within a year. And, aside from the physical destruction, there was also the penetrating sense of betrayal. During the fires Koreatown was virtually abandoned by the city— residents would later claim that officer assistance was non-existent.

The community would find ways to fend for itself, however, as immigrant populations are wont to do. And it was Radio Korea, a Korean-language radio station founded in the late '80s, that served as the hub for these efforts. As noted in author Won Moo Hurh's The Korean Americans, when the riots erupted the station was repurposed as a "veritable command center" for Koreatown—it opened up its lines to callers, and tuned into the desperate messages that were pouring out of a burning neighborhood.

According to Jin Ho Lee, who was a reporter with Radio Korea at the time of riots (he's now their chief strategy officer), the station's action was borne of necessity. "At first we'd advised—over the air—that people call the police or the fire station. But we quickly realized that's just not going to happen," Lee told LAist. "Nothing worked. Nobody could get any information. There was no public service, no law enforcement."

Radio Korea's response was to shut off all regular programming. The station became the nexus through which information was disseminated, a kind of North Star by which residents would navigate the terrain of those apocalyptic days. "People were concerned about family. So, it first happened on an afternoon, and some people were still in the area doing business. They would call in to say 'My swap meet area is OK.' Or they would call to ask if it's safe to go into this area, or that area," said Lee.

According to Taehyun Kim, a professor of journalism at Cal State Northridge, at times the station acted as a literal walkie talkie. "People would call to make sure their store is OK. Since there was no way to get there because of a curfew," Kim told LAist. "So someone would call to ask about a place. And, if someone nearby listens to the radio program, they would call to tell you 'No, Johnny's swap meet has basically burned down completely to the ground, sorry.' And the [original] caller would say 'Oh my god, I don't know what to do tomorrow.'" Kim says this back-and-forth was also used to mobilize emergency efforts. "A caller would say, 'Here's a shoe store burning down at such and such. Let's go help put out the fire. We need volunteers.'"

When asked about a particularly haunting call that has stayed with him all these years, Lee recalls an incident in which a Radio Korea reporter informed a caller that her store was engulfed in flames. "She goes, 'Oh my god, that's my store.' And she cried and cried, and she didn't know what to do. 'That's the only thing that brings in money for me,' she said." 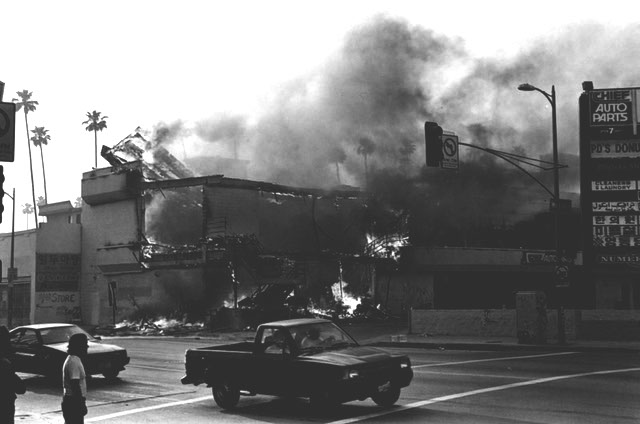 A building is burning on a street near the intersection of Western Avenue on April 30, 1992. (Photo by Gary Leonard, courtesy of the Los Angeles Public Library Photo Collection)

To be sure, the theme was one of tragedy on the airwaves at Radio Korea. But, as the fires continued to rage, there also came a call for recourse and mobilization. Lee recalls a particularly tense and violent moment that unraveled on the air for Radio Korea.

"This store owner, he's shut down the store and he's closed the metal gate. He locked in himself, and he's with the cash register in the back. People are breaking in. And they were shooting; this guy is shooting at them, and they were shooting back," said Lee. "He called and said, 'My bullets are running out,' and he gave his location in South Central." According to Lee, listeners drove out to the location and, without even knowing what type of gun the man was wielding, reached the store through a back alley and dropped off ammunition. "They just threw over the bullets and drove off," said Lee.

These forceful pushbacks—fueled by a blur of outrage and frustration—would come into focus as a narrative in which businesses weren't just a form of livelihood, but also a direct extension of one's being. This message would be driven home by Kee Whan Ha, then the president of the Korean American Chamber of Commerce, who demanded to go on-air at Radio Korea during the riots. As Ha told NPR in 2012, he was angry that the station was urging residents to return to the safety of their homes. "So I know the owner of that Radio Korea, so I brought my handgun and I put it on the table. I told him that we established Koreatown," said Ha. As noted at the L.A. Times, Ha would later go on-air to tell the audience, "Don't go home. Protect your business. Your business is your life."

The riots, which started on April 29, would come to an unofficial end on May 4, when Mayor Tom Bradley lifted the curfew. Though, as Lee informed LAist, it wasn't until two months later that Radio Korea would fully go back to its regular broadcasts. "The advertisers, if they'd paid and their ads didn't air, we gave them credit," said Lee. "We gave out a lot of credit. But the sponsors all understood the situation." By then the fires may have died down, but much of Koreatown (and stores elsewhere) were left in ruins. There came an arduous recovery period, and Radio Korea operated as a hub for these efforts as well. Through its broadcasts, it helped coordinate a peace march that took place in Koreatown just a few days after the start of the riots—tens of thousands of demonstrators took to the streets. At the station, certified public accountants assisted people who needed guidance with their insurance, and a food bank was set up in a nearby church. Lee added that the station complied data to provide estimates (in economic terms and otherwise) on the damage done to Korean-owned stores, as other outlets and researchers weren't interested in making this distinction. 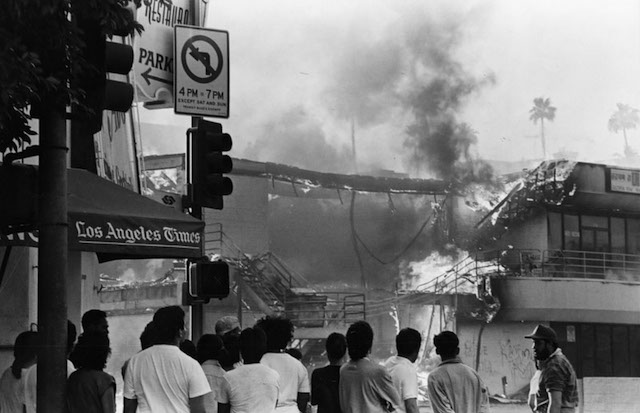 Certainly, Radio Korea played a vital role in Koreatown's perseverance. But there comes the question of how a radio station was tasked with such an all-encompassing role. The reasons are varied. There was the medium itself; radio was the perfect channel to tap into the heart of the neighborhood, as it was freed from the spectacle of imagery. While TV networks busied themselves by showing the destruction—providing viewers the drama of live theater—radio relied on the voices, and therefore the stories, of the people calling in (it should be noted that KJLH, a black-run radio station, had similarly opened up their lines to foster discussion). And, as Lee pointed out, much of the television coverage had happened at a safe distance. "I don't think any of the mainstream media was in there. Many of them were covering it from their helicopters," said Lee.

Also relevant is the fact that Radio Korea was one of the few Korean-language stations in L.A. at that time. Whereas English or Spanish stations could carve out a niche (whether it be a specific genre of music, or a certain slant of talk radio) Radio Korea had to run the gamut and serve as a sort of community center. "There was entertainment, music, art. And there's a second category, which is news from the homeland—what's happening in Korean elections, and Korean businesses—this was especially important for newer immigrants, who may be homesick and wanted to keep close ties to the motherland. And in a third category, you have local news, the things that are happening in Koreatown," said Lee. As such, Radio Korea assumed the mantel of an all-purpose outlet, like a bazaar of information that had come before the ubiquity of smartphones. And it was in this context that the Korean-American community turned to Radio Korea amid all the turmoil.

Today, Radio Korea exists in a looming gray building by the intersection of Wilshire Boulevard and Serrano Avenue (in '92 it was housed in a structure near Alvarado Street and Olympic Boulevard). Its stateliness seems to reflect the station's reputation in the neighborhood. "Koreans, even if they had not lived directly through the riots, even younger generations, know of the contributions that Radio Korea made during those times," said Kim. "So there is still tremendous respect and trust. I know I sound like a radio PR person right now. But no other station could maintain that kind of reputation." In an age when one-in-five Angelenos say that news businesses are corrupt, Radio Korea's example reminds us that media can preserve and mend a community, rather than fracturing it even further.