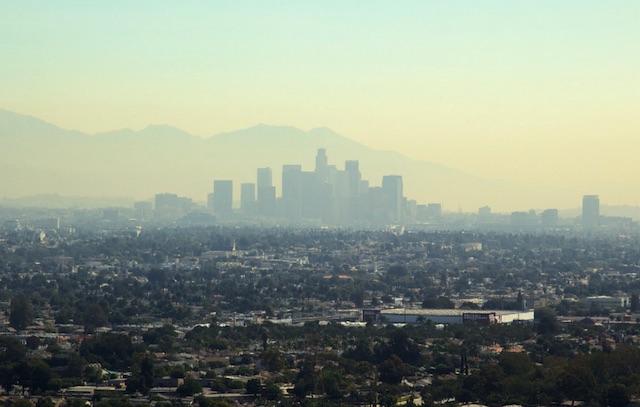 For what seems like forever, L.A. County has gotten a bad rap as being the land of airborne pollutants. The reality, however, is a bit more nuanced. While L.A. was certainly in bad shape in the '70s and '80s (when it was common for the city to flunk modern air quality standards more than 200 days in a single year), emergency measures would gradually turn back the tide; in 2013, the city failed air quality standards on only 90 days.

So everything's on the upswing, right? Not quite, according to a recent report by researchers at UCLA. The report—2017 Sustainable LA Environmental Report Card for Energy and Air Quality—gave Los Angeles a range of grades from C- to B for its current efforts. (The study, it should be noted, focused only on L.A. County.)

The grades were split into five categories in the report: Stationary Energy Use, Transportation, Renewable Energy Resources, Greenhouse Gas Emissions, and Air Quality and Human Health Impacts. According to the report's authors, these ratings were "based on compliance with environmental laws or numeric standards where applicable, on our best professional judgement, and on historical improvements and context." For the most part, the researchers arrived at these ratings using countywide data that were published from different agencies, universities and non-profit organizations.

Going into the five ratings, L.A. mostly scored an average (C) rating. The lowest grade we received was in the Transportation category (a C-); as the researchers noted, the gains we've made in this field have been modest at best, but in a haphazard fashion. The study said that, from 2005 to 2015, there was a 3.5% increase of people driving alone, which contrasts with a (whopping) 24% decrease in carpooling. What also hurt was that use of public transportation dropped by 6% in the county. One bit of good news? Sales of electric vehicles were greater in 2015 than in 2011; it's estimated that there were 190,000 of these vehicles in the county in 2015, which puts us near the halfway mark of the 400,000 electric vehicles that the county wants on the road by 2025.

We got an above-average grade in one area: Renewable Energy Resources, in which we received a B. Researchers noted that, in 2015, the county's power plants used renewable energy sources to produce 14% of its electricity generation. They also said that L.A. County is one of the top three counties in California for distributed solar energy.

As for the other categories, we received a C in Air Quality and Human Health Impacts, a C+ for Greenhouse Gas Emissions, and a C in Stationary Energy Use. "[These] grades would not get you on the UCLA Dean’s list," said the researchers. Harsh. We should have taken that Jazz Studies class as a booster from an easy A.

“We thought the grades would have been better than they were,” Mark Gold, an author on the study, told KPCC. “There has been so much great policy, so many great programs. But to not see that result yet in really tremendous reductions in energy use and greenhouse gas emissions was something that was a surprise and a disappointment.”

While the situation may seem dispiriting, the researchers say that there is cause for optimism. They point to the "overwhelming" passage of Measure M, which should give a boost to our public transit infrastructure, and note a slew of efforts that are in the pipeline: "In 2016 the city of Los Angeles committed to the development of a plan to transition to 100% renewable energy, adopted an ordinance that will improve energy efficiency in existing buildings, pledged to bring electric vehicle sharing to disadvantaged communities, passed the Clean Up Green Up to protect communities at high risk from pollution, and witnessed the opening of the La Kretz Innovation Campus, home of the LA Cleantech Incubator."