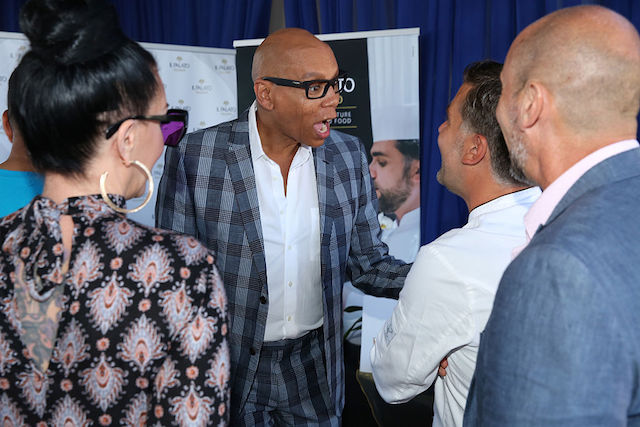 RuPaul is a living legend in more ways than one, but one of the drag queen’s top talents is keeping people excited without any trace of desperation. Last year, the Emmy-winning host followed up a stellar eighth season of her reality competition show RuPaul’s Drag Race with an even more unforgettable All-Stars 2, the offshoot of the original which brought back iconic queens from past seasons for a camp-heavy showdown. Furthermore, RuPaul has cemented Drag Race’s legacy in the annals of pop culture with the annual DragCon, bringing fans away from their televisions and deeper into her world.

DragCon mirrors Drag Race in that it grabs elements of the typical convention—panels, vendors, a key note speech—and makes them very, very gay. Drag Race beautifully executes this tactic by lifting what works from its fellow reality TV franchises, then warping them until the original shrivels in comparison.

In its third year, DragCon is taking no prisoners. RuPaul, noted Scorpio, is sure to surprise attendees with the convention’s growth, and by the looks of the panels, we’re all coming out a little more sickening (for non-Drag Race fans, it’s a compliment; you look so good it makes you sick. I don’t make the rules!) The panels range from cheeky to informative to straight-up deranged. And despite the inherent fierceness of the art-form, drag is not impervious to the daily aftershocks of our current political climate—the convention will hold two politically-tinged panels, “What is Drag in Trump’s America?” and “The Art of Resistance.”

For die-hard Drag Heads, the meet and greets are a major draw of the two-day event. Seriously, pretty much every queen from the show will be in attendance, from the forgettable to the well-loved like Alyssa Edwards, Alaska 5000, and Chi Chi Devayne. But the true focal point every year is RuPaul’s key-note speech. “Don’t be sorry,” RuPaul often says in one of Drag Race's many inspirational moments. “Be fierce.” And if you’re not living by this mantra, this weekend is the time to start.

RuPaul’s DragCon starts on Saturday April 29 at 10 a.m. and ends on Sunday April 28 at 4 p.m. The event takes place at the Los Angeles Convention Center at 1201 S. Figueroa St. Los Angeles. Tickets range from $30 to $60 and are available here.