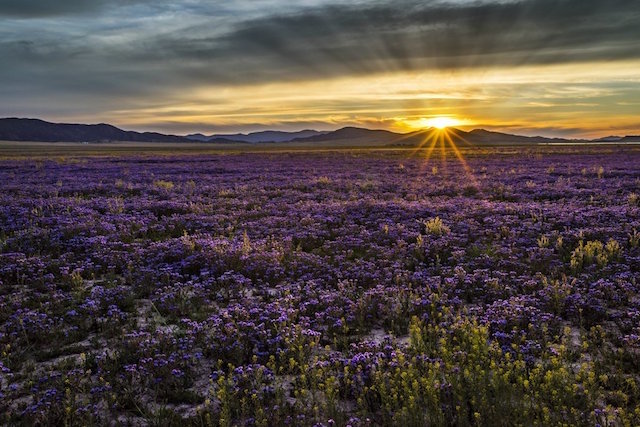 Wildflowers at Carrizo Plain National Monument (Photo by Curtis Kautzer courtesy of the U.S. Department of the Interior, via Twitter)

President Trump issued an executive order Wednesday instructing Interior Secretary Ryan Zinke to review 19 national monuments set aside as public land, reports the LA Times. The potential consequences of this review will disproportionately impact California, where six of the national monuments slated for review are located.

The California national monuments on the list —the San Gabriel and Berryessa Snow Mountains, Giant Sequoia and Sand to Snow National Monuments, Carrizo Plain and the Mojave Trails —could all lose their protected status under this review. President Trump's executive order targets all areas that span at least 100,000 acres, many of which were designated as national monuments by former Presidents Barack Obama, Bill Clinton and George W. Bush, the Washington Post reports. Carrizo Plain has been in the news as of late for its incredible super bloom blossoms.

Some environmental advocates, like Char Miller, a professor of Environmental Analysis at Pomona College, see the review as an empty gesture meant to appeal to small-government conservatives; "I think what we'll end up seeing is a report from the Interior that has no teeth and no power," Miller told LAist, predicting that the review may attract increased donations to environmental organizations like the Sierra Club and the NRDC, in the same way that January's travel ban led to record donations to the ACLU.