Photos: The Life, Death, And Rebirth Of Bunker Hill

Few parts of Los Angeles have gone through as many iterations as Bunker Hill has. The downtown promontory was nothing but an undeveloped perch with great views of the Los Angeles basin until 1867, when Prudent Beaudry—a Canadian immigrant and the thirteenth mayor of Los Angeles—bought the area for $517, notes KCET.

His vision was to build two-storied Queen Anne Victorian mansions—sloping roofs, imposing turrets, whimsical wind vanes—along the crest, and turn the hill into a wealthy community. Beaudry, albeit inadvertently, even gave the area its moniker by calling a street (lodged between what is now Grand Avenue and Hope Street) Bunker Hill Avenue in honor of the Revolutionary War's one-hundredth anniversary.

According to Bunker Hill: Last of the Lofty Mansions by William Pugsley, one of the first houses built on the hill belonged to Max Heindel, who made his money writing well-known astronomy books. "The elevation which he gave his property," Pugsley adds, "was certainly not enough to allow him a clearer view of the heavens but symbolically he was in a most august region where his inner self was assured of a peace not really possible on the flat land down below."

A population explosion then hit Los Angeles, bringing the town from 11,000 residents in 1886 to 50,000 in 1887, notes Merry Ovnick in Bunker Hill In The Rearview Mirror: The Rise, Fall, And Rise Again Of An Urban Neighborhood. And by 1888, more homes were populating the eastern part of Bunker Hill facing downtown.

By the end of the decade, Bunker Hill had become one of the most exclusive neighborhoods in the still-booming Los Angeles. Opulent mansions and hotels lined the streets. At the corner of Hill and Court Street, Lewis Bradbury, who made millions by investing in Nevada's Comstock lode, completed construction on his tony mansion in 1887 (six years before he built his namesake commercial building, which still stands today, at Broadway and Third streets). The glitzy Melrose Hotel was opened in 1881. President William McKinley would stay at The Melrose during his 1901 visit, the same year the Angels Flight funicular opened. President Theodore Roosevelt would stay on the hill in 1903, adds Pugsley. 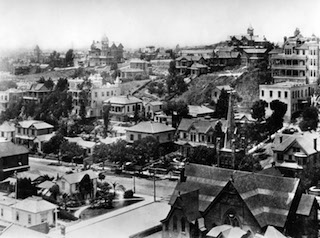 A view of Hill Street (foreground) with the eastern slope of Bunker Hill behind. ca.1890 (Photo courtesy of the Los Angeles Public Library Photo Collection)

And though Bunker Hill had some two decades as the city's crown jewel, the neighborhood slowly grew more crowded (and undesirable) with apartment buildings and commercial development moving in. The wealthy elite of Los Angeles made their exodus to more remote and exclusive neighborhoods like Angeleno Heights, West Adams, and Westlake through the turn of the 20th century.

With the money now gone, Bunker Hill shifted from being an upper-class enclave to a white-collar one, and, eventually, to a working-class neighborhood. For the early years of the 20th century, Bunker Hill remained a vibrant, flourishing community. That would start to change in 1910s as the hill became an impediment to westward expansion and the free movement of automobiles. The 3rd Street tunnel already bore through the hill in 1901, and talk of completely leveling Bunker Hill grew in the following years.

As KCET notes, in 1928, it was proposed that Bunker Hill be completely razed—the hill itself literally removed through hydraulic mining. C.C. Bigelow, president of the Southwestern Insurance Corporation of Los Angeles, proposed the plan, and offered to put up the requisite $50 million. "Level it!" he told the city council, writes Pugsley. "Right down to the Hill Street grade!"

The city hesitated on the plan, but the threat led to the demise of the neighborhood. "Properties went into decline as owners deferred maintenance," Nathan Marsak writes in Bunker Hill In The Rearview Mirror. "With the threat of condemnation and razing hanging over, why bother with upkeep?" During these purgatory years, the hill would finally fall into destitution, becoming a slum by the 1930s.

Raymond Chandler makes note of the neighborhood's dark years in his 1942 novel, The High Window.

Bunker Hill is old town, lost town, shabby town, crook town. Once, very long ago, it was the choice residential district of the city, and there are still standing a few of the jigsaw Gothic mansions with wide porches and walls covered with round-end shingles and full corner bay windows with spindle turrets. They are all rooming houses now, their parquetry floors are scratched and worn through the once glossy finish and the wide sweeping staircases are dark with time and with cheap varnish laid on over generations of dirt. In the tall rooms haggard landladies bicker with shifty tenants. On the wide cool front porches, reaching their cracked shoes into the sun, and staring at nothing, sit the old men with faces like lost battles.

Bunker Hill was the haunt of other novelists during this era, too, including Charles Bukowski and John Fante. In 1940, Fante penned a short piece for the L.A. Times about his old stomping grounds titled"Goodbye, Bunker Hill".

I used to live on Bunker Hill. It was my first home in this incredible city. That was in 1932, a time of dreams for me, and of poverty. I had a typewriter and a stack of white paper, and I had my room in a hotel on Bunker Hill.

It cost me $3 a week, that little room, a fabulous sum in those lean days, but I wish I might do it over again, sit in my little room with its worn green carpet, sit there in the high, old-fashioned rocker, eating an orange, my feet out the window, feasting my eyes on the city below. Such dreams for a man!

And Bukowski recalled the Bunker Hill of yore in a 1978 letter to a friend.

Bunker Hill was [Fante's] neighborhood. I lived there too before they leveled off the poor and put up high-rises. It was the best place for the poor, the best place for cabbage and fish heads, boiled carrots, the old, the insane, the young who couldn't fit into the offices down there.

Artists also called Bunker Hill home during this time. Most well-known among them may be painters Leo Politi and Ben Arbil, who catalogued the architecture and life of the hill. 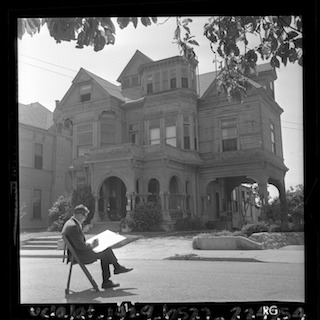 In the middle of the 20th century, Bunker Hill also became the location of several film shoots about America's darker side.

"Bunker Hill fell into charming disrepair by the mid-century, and became the location for a lot of terrific movies, [and] a whole lot of film noir," David Kipen, founder of Libros Schmibros in Boyle Heights, told KPCC.

"The movies loved Bunker Hill," Thom Andersen notes in his seminal documentary Los Angeles Plays Itself. "The lords of the city hated it. Rents were low, so it put the wrong kind of people too close to downtown."

Notable films shot on the hill include 1949's Criss Cross, Stanley Kubrick's 1956 film The Killing, and 1961's docudrama The Exiles. 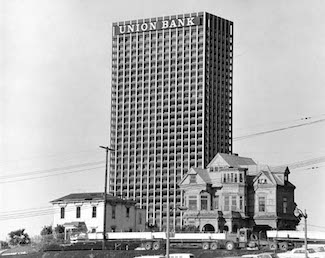 The California Community Redevelopment Law of 1945 and the Federal Housing Acts of 1946 and 1949 led to the 1948 creation of the Community Redevelopment Agency (CRA), and Los Angeles was finally armed with the necessary laws to clear Bunker Hill of what it had become. The Bunker Hill Renewal Project was created in 1959, and by 1969, the final two Victorian houses on Bunker Hill (The Castle and The Salt Box) were relocated to Heritage Park in Montecito Heights.

The modernist, high-rise version of Bunker Hill that we know today began around the same time that the final gable-roofed relics of Beaudry's vision were removed. A futuristic master plan was drawn up in the early 1960s, envisioning the hill littered with high-rises and office towers. 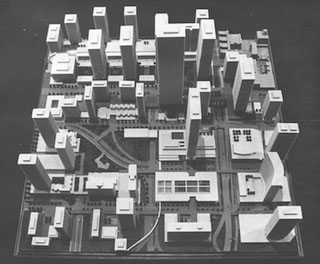 DWP's John Ferraro Building was completed in 1964, as was the Dorothy Chandler Pavilion—billed as the West Coast equivalent of New York City's Lincoln Center. Union Bank Plaza, the first of the neighborhood's skyscrapers, finished its three-year construction in 1968. In 1973, a people mover was proposed across Bunker Hill (the remnants of which can still be seen today), but the plan was ultimately killed by the Reagan Administration in 1981.

Bunker Hill and its newly minted "Financial District" continued its re-ascension to prominence through the 1970s and 1980s, but finally lost momentum by the 1990s. That would change again in 1999, when the Los Angeles City Council passed an adaptive reuse ordinance that would lead to the revitalization of all of downtown. In 2003, the Walt Disney Concert Hall opened on Grand Avenue. Along with the MOCA's Grand Avenue location across the street, the 2015 opening of The Broad Museum cemented Bunker Hill as the epicenter of high art culture in Los Angeles.

Looking ahead, Bunker Hill is awaiting the opening of a subway station at Hope and Second streets, along with plans for the Related Companies' almost $1 billion, Frank Gehry-designed Grand Ave. Project. As a focal point of culture, commerce, and glitzy new residences, the future of Bunker Hill seems to be a return to its past.