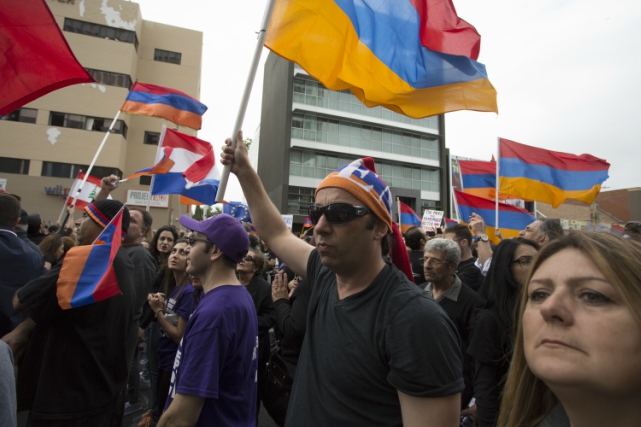 Marchers in L.A. during the 100th Commemoration of the start of the Armenian Genocide. (Photo by David McNew/Getty Images)

Beginning at noon on Monday, tens-of-thousands of people are expected to gather in Pan Pacific Park (home of the Los Angeles Museum of the Holocaust) to march one-and-a-half miles to the Turkish Consulate in commemoration of the 102nd anniversary of the start of the Armenian genocide.

On April 24, 1915, some 250 Armenian intellectuals were rounded up by the Ottoman Empire and deported to detention camps near Ankara. The event, referred to as Red Sunday, is considered the first action of the Armenian genocide that would ultimately see over 1.5 million Armenians killed by 1923.

Turkey maintains that the Armenian deaths were part of the larger chaos of World War I and the fall of the Ottoman Empire, denying any consolidated attempts at ethnic cleansing.

"Over 100 years ago, the Ottoman Empire undertook a brutal campaign of murder, rape, and displacement against the Armenian people that took the lives of 1.5 million men, women, and children in the first genocide of the 20th century," Schiff wrote in a statement last month upon his introduction (with Congressman Dave Trott) of a bill to officially recognize the Armenian Genocide. "Genocide is not a historic relic - even today hundreds of thousands of religious minorities face existential threat from ISIS in Syria and Iraq. It is therefore all the more pressing that the Congress recognize the historical fact of the Armenian Genocide and stand against modern day genocide and crimes against humanity."

According to the Los Angeles Times, in 2016, Glendale became the first school district in the United States to have an official Armenian Genocide Remembrance Day.

Southern California is home to the largest community of Armenians in the United States. The Atlantic notes that Glendale has the second-largest population of Armenians outside of Armenia’s capital city, Yerevan.

LADOT has announced the following street closures for the event: