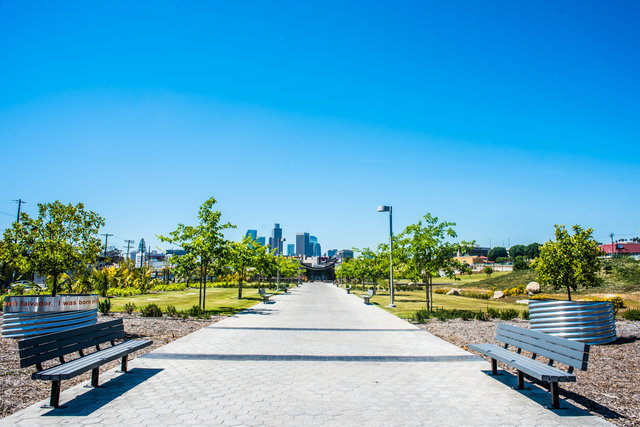 The L.A. State Historic Park re-opened Saturday with a full day of exploration, performances, and speeches from elected officials. The sweltering heat was no match for excited Angelenos ready to embrace the new public space, and people from all over L.A. County came to explore the historic park. Governor Jerry Brown gave a speech commemorating the opening, recognizing the park's extensive history with the Native American tribes that lived in the area before it became Los Angeles. He explained how, in order to maintain an equally long legacy, "[w]e are going to have to protect the environment and respect each other so we don’t destroy everybody," according to the LA Times. Chief Red Blood of the Gabrielino-Tongva tribe introduced Governor Brown and prayed for the land in his native tongue.

Councilman Gil Cedilla also spoke, referencing the debate between re-opening the park and creating more job opportunities. He described how "[i]t took the community to come together" in order to move the park project forward, according to the LA Times. Sean Woods, the superintendent of California State Parks in Los Angeles, echoed this idea in a previous statement, saying "We decided to leave no stone unturned in our attempt to reach out and build a park with the community rather than for the community." This community outreach is at the core of the new park's values system; the park is now one of the largest expanses of open, public space in Los Angeles, and it'll only build and maintain value if people in the community use it.

The opening featured performances from local bands Quetzal, Subsuelo, and Taylor McFerrin, as well as tours from Tom Carroll of Tom Explores Los Angeles and public art from Rosten Woo about the history of the Chinatown Yard Alliance.