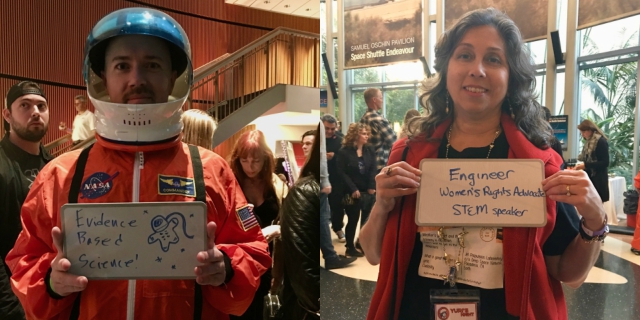 (Photos courtesy of the March For Science Los Angeles)

On Saturday, tens of thousands of Angelenos will take to the streets of downtown in the name of empirical evidence. Held on Earth Day, the L.A. March for Science aims to advocate for the funding and transparency of scientific research—and encourage lawmakers to ‘consult the data.’

“The facts matter and policy should be directed by evidence,” says L.A. lead organizer Alex Bradley.

The event kicks off at 9 a.m. in Pershing Square, and is one of 517 gatherings around the world, including the Washington, D.C., flagship march. After a 10 a.m. rally, the crowd will trek to City Hall for afternoon calls to action. Speakers hail from scientific fields ranging from botany to theoretical physics, though non-scientists including House Rep. Brad Sherman (D-Calif), and “Hidden Figures” screenwriter Allison Schroeder will also deliver talks.

A Science Expo will set up shop at Pershing Square Park from 9 a.m. to 4 p.m., offering teach-ins, demonstrations, and various activities for children and adults.

While the march is not technically a Trump-specific protest, it is “political, but not partisan,” says Caltech theoretical physicist Sean Carroll, Ph.D. Carroll’s afternoon talk will delve into how democracy can benefit from scientific attitudes and methodologies. “I think it's important that we recognize the value science has and that it's a necessarily political thing,” he adds. “Politics comes into deciding how much money to spend, and how seriously to take scientific findings.”

Other speakers readily broach the topic of Trump and characterize his administration as uniquely pseudo-scientific.

“The administration's hostility to science is shocking,” says Rep. Sherman.

The Trump train’s recent emissions include moves to roll back Obama-era energy policies and revisit fuel economy regulations. “Growing up in Los Angeles, I remember the days when you didn't talk about how bad the smog was in Beijing, you talked about how bad the smog was in Los Angeles,” Sherman recounts. “It was toxic. We've such made such incredible progress that people expect that we're going to be getting better. Instead, we have an E.P.A. director who's been appointed because he has so often sued the E.P.A.“

The President’s first budget plan, released March 16, proposes enormous cuts to the Environmental Protection Agency and National Institutes of Health, reports CBS News. “If the NIH alone is going to have a proposed budget cut to the tune of almost 6 billion dollars, that's eliminating our job prospects and our abilities to do the science the public has been funding,” says Bradley.

A January 23 White House-issued gag order restricting the communications of E.P.A. employees galvanized researchers to speak up, according to the event's organizer. “That was the point at which a lot of scientists who were on the fence about getting involved in politics decided it was really time that we set the record straight,“ says Bradley.

Chaired by noted climate-denier and Breitbart contributor Rep. Lamar Smith (R-Texas), the House Committee on Science, Space, and Technology is also a source of consternation among research folk. Since Smith assumed the post in 2013, he has issued a flood of subpoenas to environmental groups and government scientists, including researchers from the National Oceanic and Atmospheric Administration, as reporter Lawrence M. Krauss chronicles on the New Yorker.

“It is extremely embarrassing to the United States that the committee is so manifestly anti-scientific,” says Carroll. “You shouldn't be allowed to ignore what science is saying when you're supposed to be supporting science.”

These tensions surfaced in a heated March 29 committee hearing, when Republican congressmen trotted out a trio of climate skeptics from the fringes of the field to testify about alleged uncertainties clouding the research process, reports Mother Jones. Penn State climate scientist Michael Mann, Ph.D., who will be featured at the D.C. March, was the sole witness voicing the consensus views that climate change is real, dangerous, and caused by human activity.

“It is sad that we’ve reached a stage where the U.S. House of Representatives Science Committee, under the current Republican leadership, is now little more than a weapon for polluting interests to attack science that proves inconvenient to their financial bottom line,” Mann said over email.

“What we are witnessing is an unprecedented attack on the very foundation that modern civilization is based upon,” he continued. “There needs to be a whole lot more outrage about this.”

The L.A. organizers hope to provide a forum to channel some of the outrage, dismay, and free-floating anxiety among scientists and concerned citizens into action.

“If [the overwhelming scientific consensus] suggests that we're increasing the global temperature of the earth and we think we might have the means to in some way contribute positively to reversing that, then the political question is: do we?” Bradley says. “I think a lot of scientists have decided that it's important to advocate for that second step.”

You can peruse the full program of the L.A. March for Science on the event website and RSVP on Facebook.

You can also check out the information organizers put up on Instagram, as well as images from people who are prepping for the action:

The Science Expo and some talks start at 9:00am; the rally at 10:00am; the march at 11:00am; the Call to Action speeches begin at 12 noon and the Science Expo ends at 4:00pm. Show up on Saturday, April 22 at 9:00am in Pershing Square to take part in March For Science Los Angeles! We encourage all marchers to be environmentally friendly and carpool with friends or utilize public transportation. Some options : Metro, LA's public transportation system. Rally Bus is offering 10% off all bookings with an extra discount for the first 500 people. Skedaddle is offering $10 off their service for marchers who use the code SCIMARCHLA10. Ridevu is a free service that helps marches find ride-sharing opportunities. #marchforsciencela More 'day of march' info : http://marchforsciencela.com/day-of-information

The @marchforsciencela Science Expo will be hosted by @nerdist's @sci_phile and there's a fun slate of demos and presentations in store! Also, if you still haven't gotten your official MfSLA t-shirt, we'll have some there for you too. Come early and beat the lines and traffic. #losangeles

Sometimes the most obvious things are the ones we take for granted. Even scientists take science for granted. But we can’t afford to anymore. If you haven’t yet heard, we will host a Science Expo during and after the Science March. Interactive science demonstrations, fun performances, and professional science policy and advocacy groups are lined up to make sure we not only March, but that we educate and take action as well! If you would love to be a vendor at the Expo, please fill out the application in the link below. The deadline (04/07/17) is this Friday! ➡️➡️http://bit.ly/2n9kBq5 📷 by Karin (Twitter @sage_risotto) #marchforscienceLA #sciencerules