The 10 Best Places To Be Really, Really Stoned In Los Angeles

The passing of Proposition 64 was glorious news; if there’s any state that’s conducive to being high, it’s California, what with its mild weather, glittering sunsets, and abundance of Double Doubles.

Certainly, L.A. itself is no difference; this is, afterall, the city where Cheech and Chong, The Dude, and Larry “Doc” Sportello traipsed around in a billow of pot smoke. And the great thing about the City of Angels is that you don’t have to be holed up in your living room while you’re high; there’s plenty to do, and much of it will help you keep that vibe going.

Whether you’re looking to just chill out, or overload your senses, here’s a list of places that you could visit after you’ve taken a hit. It goes without saying that, if you’re traveling, play it responsibly and use a ride-sharing service. Take all other precautions as necessary, because of course. 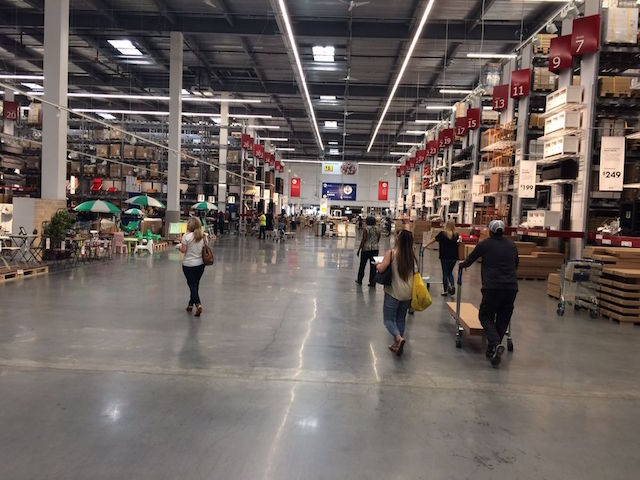 (Photo by Ronald M. via Yelp).

Do you like to get stoned and then watch all the different future paths your life could take expand and dilate before you like your pupils when a cop shines a light in them? Totally separate: do you really, really like running your hands over different textures when you are high AF? Then there is no better place in Los Angeles to be stoned out of your gourd than the Burbank IKEA. Wander the vast expanses of model room-lettes and imagine all the different people you could be and lives you could lead, if you just bought this Aläng lamp. Or, that Sinnerlig lamp. Totally different worlds, right? Collapse onto a Hemnes bed, close your eyes, and let all the alternate realities flash before you like zoetrope frames. Keep your eyes closed and run your hands over the cool wood of the bed frame and the silken sheets, and then go to the rugs/fabric section, lie down on the floor, and touch all the samples to your face. Find one that is softer than a rabbit’s ear, tear up at the beauty of this world, and then eat IKEA cinnamon buns at the Exit Cafe until you finally feel whole or throw up in the parking lot. —Julia Wick 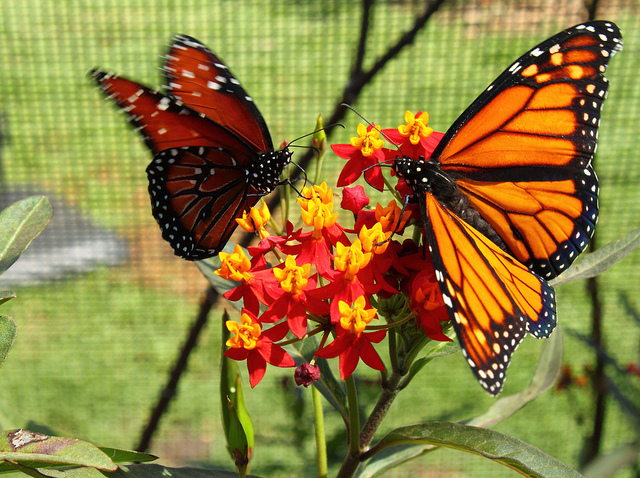 (Photo by Scott McKittrick via the Flickr Creative Commons).

You know what’s cool when you’re stoned? Everything. You know what’s especially cool when you’re stoned? A living, flying kaleidoscope of butterflies soaring softly around your head as you marvel at the ephemeral beauty of nature. You can make this dream a reality at the National History Museum of Los Angeles’ Butterfly Pavilion, which is open to visitors through September 4. The museum website advertises “hundreds of free-flying butterflies” inside the Pavilion, as well as a team of “Gallery Interpreters” who can tell you everything you ever wanted to know about butterflies (but were afraid to ask). Be mindful, though—the Gallery Interpreters probably aren’t trained to answer questions like “But why are the butterflies so beautiful?” and “Honestly, why are they here? Why are any of us here? Are we all just butterflies, fluttering around the enclosed museum pavilions of our lives?” —Emma Specter 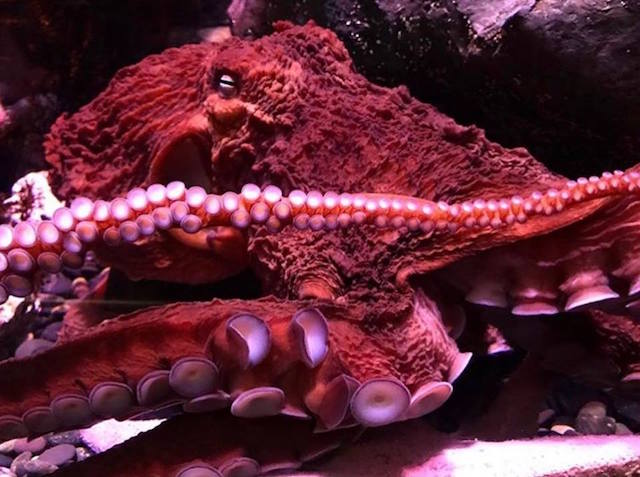 (Photo courtesy of Aquarium of the Pacific via Facebook)

AQUARIUM OF THE PACIFIC

If you're looking for a chill time, look no further than the aquarium. Envelope yourself in the intimacy of the dimly lit exhibits, which are splashed with the soothing blue of the water tanks. Marvel at the jellyfish as they expand and contract—notice how their tentacles trail like streamers. Check out the sea otters and the effortless way they glide through the water. Let your heart melt at the quiet nobility of the penguins. Listen to the recorded calls of the majestic humpback whale—feel it reverberate through your body. And if you're lucky there'll be an open station for you to feel starfish with your barehand. The aquarium is stimulating not just for the senses, but for the mind as well. Who says you can't have an educational experience while high? There's also a well-stocked cafe if you feel a craving coming on. —Tim Loc 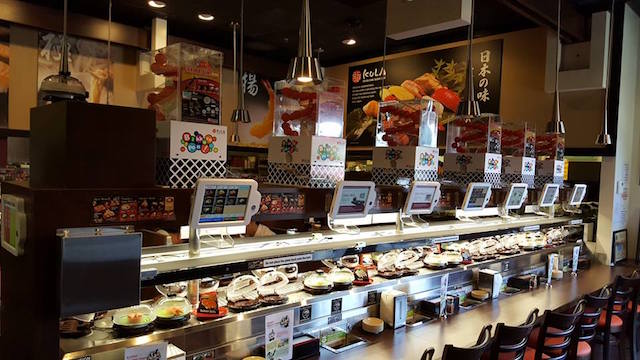 Kula Revolving Sushi Bar is a high-risk/high-reward place for an extremely stoned person. The requisite hour-long wait for a table will fly by when you’re high, especially if you distract yourself by exploring the 99-cent wonders of Daiso Japan next door. Once you’re finally seated, you may be moved to tears by the sight of unlimited salmon skin rolls whizzing toward you on a conveyor belt; it’s hard to resist grabbing more sushi than anyone could humanly eat even when you’re sober, so going to Kula high is a daunting proposition indeed. Still, the sushi is so cheap (nigiri and roll plates for just $2.25!) that you stand a good chance of satisfying the munchies without going completely broke. —Emma Specter 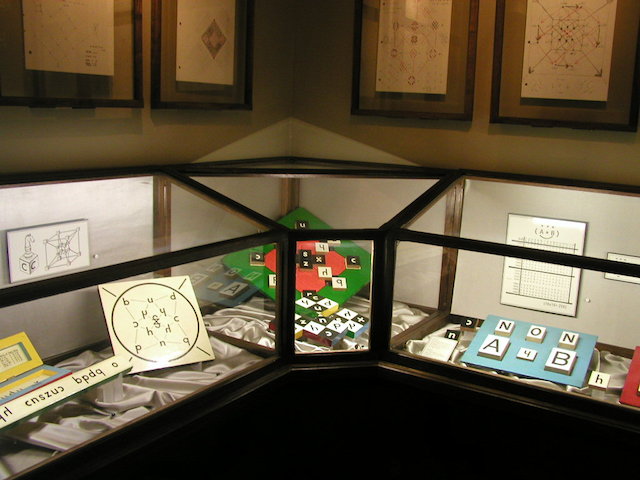 The Museum of Jurassic Technology. (Photo by mimmyg via the Flickr Creative Commons)

The museum will either tickle your funny bone, or put you in an introspective mood, or maybe even both. Such is the legacy of the Museum of Jurassic Technology, which offers up plenty of parody, but with an attention to detail that you can't help but admire. Expand your mind as you learn about the stink ant of the Cameroon, the biodegradability of gambling dice, and the brave canines who pioneered space travel for their four-legged brethren. If you feel overwhelmed by the constant stream of information (or if you can't stop giggling), stroll into the museum's Tula Tea Room to relax with some tea and cookies. At the end of your visit you'll find that you have a newfound appreciation for the "Lower Jurassic"—one of the most fruitful and galvanizing periods on Earth. —Tim Loc 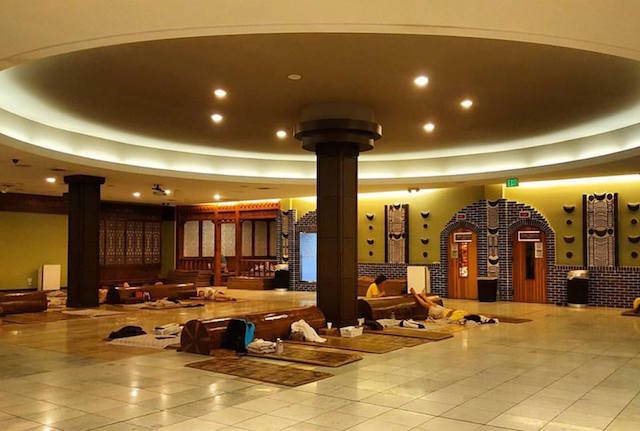 Arguably L.A.’s biggest, best Korean spa, WiSpa is something of a transcendent experience even when you’re not high. For just a $25 entry fee, you have 24 hours’ worth of access to a gym, a rooftop deck, communal hot and cold tubs, a vast library of East Asian graphic novels, a series of clay, jade and ice saunas, and an unlimited supply of hearty Korean food (although, depending on your level of intoxication, you might be tempted to spend the entire day cowering in the weirdly soothing meat-locker aura of the ice sauna.) Sleepy? Pull up a mat and a pillow, and curl up on WiSpa’s heated floor as the sounds of Korean soap operas and game shows lull you into peaceful slumber. Hungry? Head to the cafe for a massive tray of hot stone bibimbap, followed by an even-more-massive shave ice. There’s no shortage of sensory delights to partake in at WiSpa, but let’s face it; if you’re really stoned, “sleepy” and “hungry” are pretty much the only physical states you’ll have to contend with. —Emma Specter 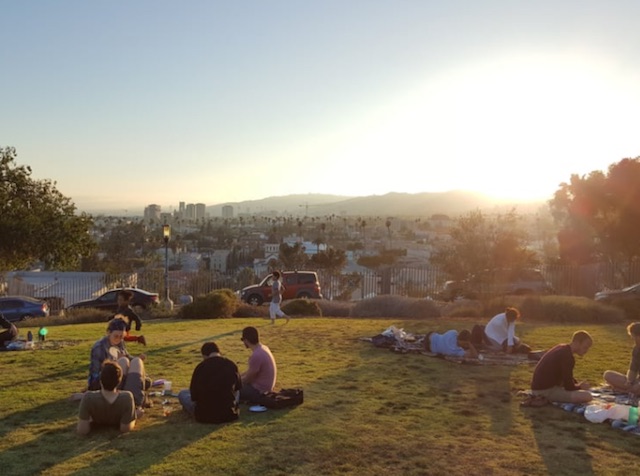 (Photo by Jimmy W. via Yelp)

If you're looking to go outdoors and immerse yourself in some greenery, Barnsdall Park is a good bet. To boot, it's such a gloriously L.A. park, as it's home to one of Frank Lloyd Wright's masterpieces— the venerable Hollyhock House, at which you can take a tour of. There's also the underrated Los Angeles Municipal Art Gallery, which not only dives into L.A.'s visual art, but also its literary scene. But hey, the point here is to be outdoors, right? Lay out on the lush spread of green. Dig into that picnic basket filled with everything you'd pilfered from your cupboard. Point out the various landmarks on the horizon (the Hollywood Sign, the Griffith Observatory, et cetera). Become mesmerized by the golden orb of the setting sun. It's a perfect place to feel at one with the city. —Tim Loc 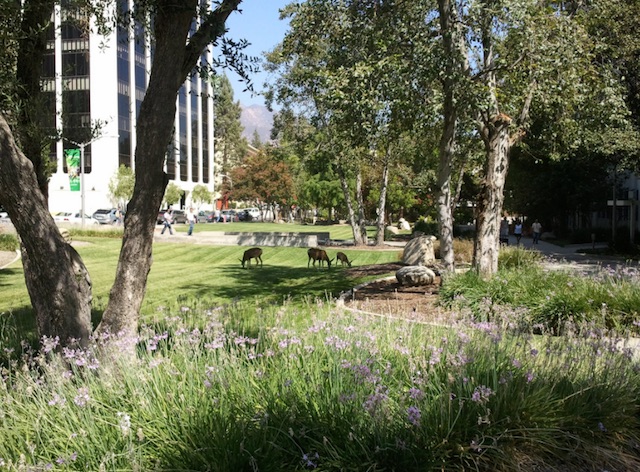 Outside at JPL. (Photo by PRO~Na`naSuge~ via the LAist Featured Photos pool on Flickr)

The Jet Propulsion Laboratory exists in the spooky realm of La Canada (or Pasadena), where the Devil’s Gate looms nearby and Jack Parson’s occult legacy hangs over the place like a silent specter. There are also some incredibly sterile and nerdy science buildings, with employees and tour guides doling out dad jokes. This makes it the perfect place to be stoned. Get yourself on a free public tour, listen to the failures and successes of one of the smartest enclaves in the county (and country), hang out on a little patch of desert meant to simulate Mars, and let your mind wander to the existential wonders of whether we really are the only sentient beings in the universe. The science talk will likely go completely over your head, but just imagine your body ejecting into space and it won’t matter that the scientists are reminding you of how poorly you did in high school physics (probably because you were getting high all the time). —Annie Lloyd 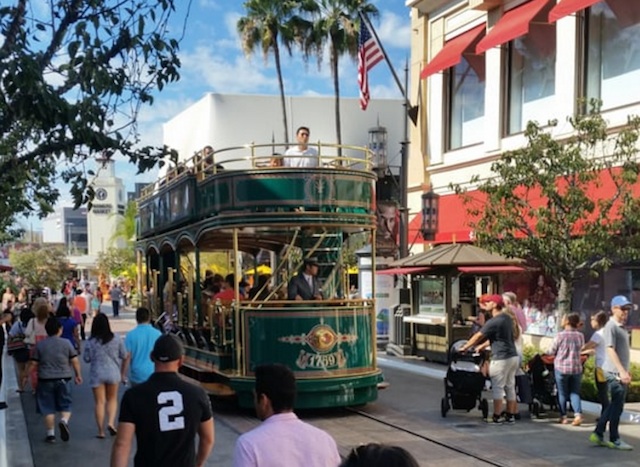 (Photo by Mike O. via Yelp)

The Grove can be somewhat overwhelming when you’re in your right mind, but show up stoned to get transported back to a magical, innocent time when the mall was more than just a collection of crowded stores with crappy parking. When you were young, the mall was utopia, it was Atlantis; it was everything, and when you showed up to the mall with your allowance burning a hole in your pocket, you were everything. Ride the trolley over and over, feast upon the spoils of Dylan’s Candy Bar, see an animated movie alone in the middle of the day, try on overpriced bathing suits with all the physical confidence of Eve before the fall—when you’re high at the Grove, nothing is off-limits. Beware the American Girl Doll store, though—when you sober up, you might be dismayed to remember that high-you deemed it a good idea to spend $115 on that Samantha doll your parents never got you for your birthday. (It's another $50 for her collection of Victorian nightgowns, which are sold separately, obviously.) —Emma Specter 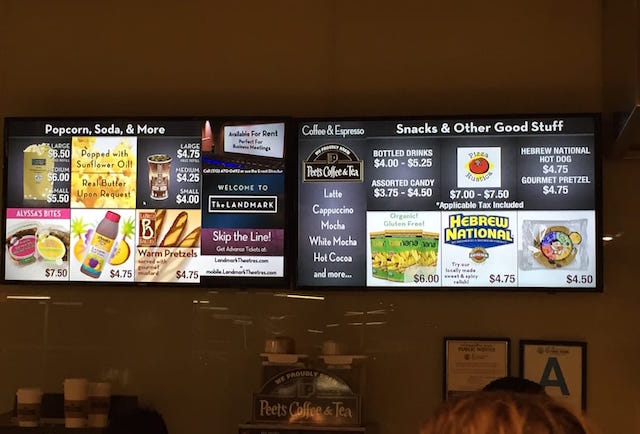 Concessions at the Landmark. (Photo by Jennifer L. via Yelp).

There are some movies you wished afterward you had seen stoned, yes. But when you light up and just want to turn off your mind and let Hollywood transport you, this is the place to go. Other theaters are too big, and crowded, and aggressive, and their concession counters sell you what? Just M&Ms and a stale pretzel? Come on, you can do better. Head west—just like generations of Americans looking for a better life before you did—to the Westside Pavilion. Head to the Landmark. Buy your ticket to that new movie you heard was a real mind-warp, and stare at the movie costume display in the lobby for 45 minutes (it's O.K., no one knows you're high, relax). Or, if you're prone to wandering, the theater is connected to the mall, and, as we said above, the mall is a perfect place to roam stoned. If it's munchies you're looking for, between The Landmark's in-house restaurant (cheese plates, flatbreads, french fries) and the loaded concession stand (gourmet dark chocolate bars, ice cream, strawberry Pokey sticks), they've got you covered on snacks. And once inside the theater, those comfy, leather seats are prime vegging space. So sit back, and try your hardest not to fall asleep. —Oren Peleg