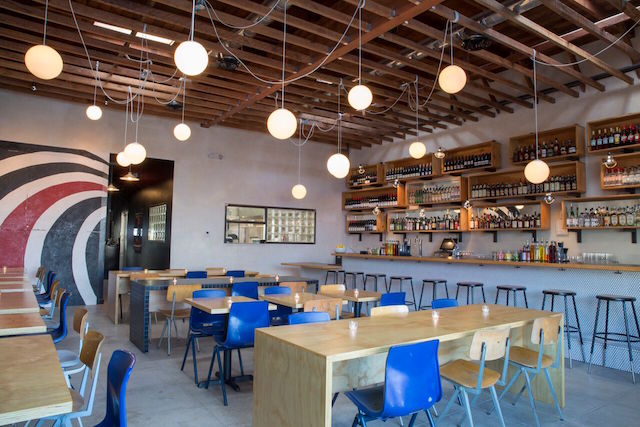 In case you haven't heard, the snake has fully eaten its tail, and there is now an Elliott Smith-themed bar in Silver Lake. Sorry to ruin your day, we really thought you knew.

Quick refresher: the cover of Elliott Smith's 2000 album Figure 8 features a photograph of the late musician standing in front of the Sound Solutions mural on Sunset Boulevard. After Smith's death in 2003, the now-iconic mural transformed into a makeshift memorial of sorts, with fans making pilgrimages to leave flowers and heartfelt Sharpie-d tributes. The Elliott Smith wall, as its now known by locals and far-flung fans alike, has been tagged over and cleaned up a few times through the years, but it's inextricably tied to Smith.

Bar Angeles, which opened in February and strives to be "an elevated dive bar," is behind the Elliott Smith wall, or at least what was once the Elliott Smith wall—the restaurant cut out a large section of the wall and replaced it with glass block windows. But don't worry, in a creative, Epcot Center-ish twist, the restaurant is actually Elliott Smith themed. According to a press release, "this neighborhood gastropub is inspired by the vibrancy of the musicians, artists, and misfits who enrich the neighborhood of Silverlake [sic]."

Wade McElroy and Russell Malixi (Horse Thief BBQ, Cafe Birdie, and Good Housekeeping), the restaurateurs behind Bar Angeles, even saved said chunk of wall and put it up as decor inside the restaurant, so as to keep with the restaurant's Elliott Smith theme. The late singer-songwriter, who publicly struggled with alcoholism and addiction, died of a self-inflicted stab wound to the chest.

"Essentially it's in the same spot, just moved back 40 or so feet, and we left the area that Elliott used for his album art untouched," Jake Rodehuth-Harrison of ETC.etera, who designed the space, said.

The restaurant is named after Smith's 1997 song "Angeles," which is cool, because Either/Or, the album that song was on, takes its name from a book by Søren Kierkegaard, so it all comes full circle.

In fact, it was in that very book that Kierkegaard asked, "What if everything in the world were a misunderstanding, what if laughter were really tears?" Brunch at the restaurant named after the song named after the book will be served on Saturdays and Sundays from 10 a.m. - 2:30 p.m., beginning this weekend.

The "familiar yet innovative menu" will include a bone marrow soft scramble, french toast topped with whipped walnut butter, Eggs Benedict Pizza with a baked egg, bacon, spring garlic, hollandaise, and chives, and the unshakable realization that brunch at an Elliott Smith-themed bar is probably the closest humankind will ever get to definitively disproving the existence of any meaning in the universe. Mimosas for the table?

Note: A Bar Angeles' spokesperson would like to note that although they do pay homage to the late singer-songwriter, they do not self-identify as an Elliott Smith-themed establishment.