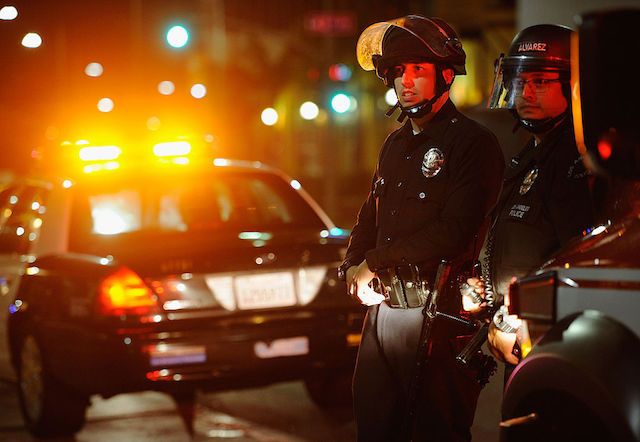 On Tuesday, the Los Angeles Police Commission approved a revised use-of-force policy that favors de-escalation over use of deadly force. The new policy requires officers to try and de-escalate situations using non-lethal force whenever possible before firing their guns.

According to the L.A. Times, the revised policy represents "a major step" in the department's goal of lowering the number of police shootings, which has been the focus of a nearly two-year long campaign. More specifically, the updated policy adds in the following wording to the preamble of the department's use-of-force policy: "officers shall attempt to control an incident by using time, distance, communications and available resources in an effort to de-escalate the situation, whenever it is safe and reasonable to do so.''

De-escalation tactics and less-than-lethal force have already been a part of LAPD training. Revising the official policy to explicitly state that officers should aim for de-escalation whenever possible is significant because it could hypothetically be taken into account when an officer is facing a disciplinary action following a shooting. The amended policy has the backing of the police union that represents the LAPD's more than 8,000 rank-and-file members, according to the Daily News.

City News Services reports that some activists raised concerns over the lack of specificity in the new language, which doesn't include a more detailed breakdown of preferred de-escalation techniques. The ACLU also expressed concerns that the new policy did not explicitly state that de-escalate would be considered when determining whether an officer's use of force was reasonable, according to the Times.

The revised policy, which was also supported by LAPD Chief Charlie Beck and Mayor Eric Garcetti, was approved in a 5-0 vote.