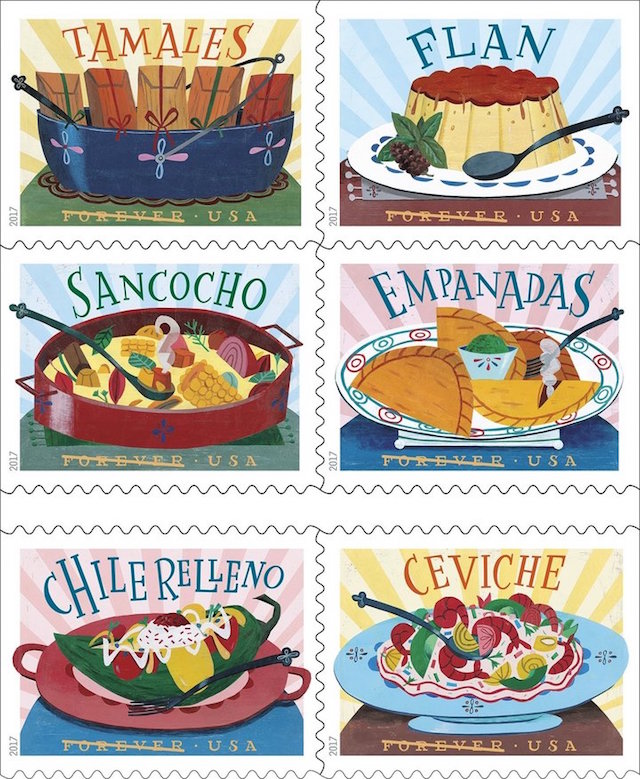 (Courtesy of the USPS)

Aptly titled “Delicioso,” the playful designs by Latino illustrator John Parra pay tribute to some of the most popular dishes from Latin and Caribbean cuisine. “I had the honor to create the artwork for the collection, with images celebrating the influence of Central and South American, Mexican and Caribbean food cuisine,” Parra wrote on his website. “Each stamp showcases a bright and playful illustration of one of the following dishes: tamales, flan, sancocho, empanadas, chile relleno and ceviche.”

According to a press release from the USPS, each illustration was made by applying several layers of acrylic paint onto textured boards and then using sandpaper to give the designs a vintage look. No word yet on if each stamp tastes like its illustration. “With the release of the new Delicioso Forever stamps, the U.S. Postal Service celebrates the influence of Central and South American, Mexican and Caribbean foods and flavors on American cuisine,” U.S. Postal Service spokesperson Roy Betts in a statement to The Huffington Post.

The stamps will go on sale starting April 20, and if the one week wait is too much, remember that you live in Los Angeles and can most likely find unbelievable IRL versions of each dish to enjoy in the meantime.