Op-Ed: What I Learned Trying To Unseat A City Council Incumbent With A Grassroots Campaign 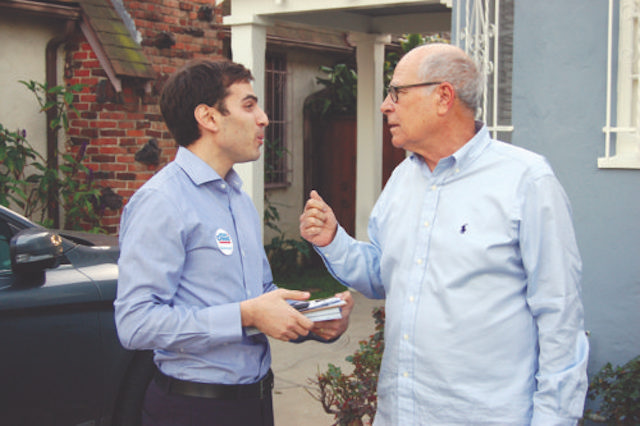 Jesse Creed (left) talks about development issues with a resident of Council District 5. (Photo by Gregory Cornfield courtesy of the Beverly Press)

Jesse Creed ran against incumbent City Councilman Paul Koretz for the District 5 seat in the March primary election. This was Creed's first bid for elected office.

On a chilly night two days before the March 7 election, I learned a lesson I’ll never forget. I was at the doorstep of John, a voter in Westside Village. Right next to Palms, Westside Village is quiet and secluded; it is a bucolic hillside in the midst of the urban flats known for lacking sidewalks. Though peaceful, Westside Village was where, in just one conversation, I learned the single biggest challenge of any campaign: the name recognition barrier. I came up against the challenge of piercing the consciousness of a busy and distracted electorate with my name: Jesse Creed.

It is because the consciousness of the electorate is elusive and discursive that face-to-face interactions work. Those interactions force the voter to engage with you, making them both memorable and lasting. When canvassing the Westside Village neighborhood that night, I did what I always did. I’d knock on doors of likely voters, giving them my two to three minute spiel and answering any questions. I closed with a hard ask, “Will you vote for me?” and more often than not I left with a supporter. It’s the most effective way to earn votes, though by far the least efficient.

But at John’s door in Westside Village, I was hit with a harsh reality. I knocked on John’s door before my 8 pm cutoff. He opened, and I gave my elevator pitch. “Well, I was going to vote for Paul Koretz because I had never heard of you before.” My heart sank. Never heard of me before? How could that be? I ultimately earned his vote after answering a few questions on marijuana regulation and speed bumps, but the victory was bittersweet. My campaign had failed at the most important thing any successful campaign must achieve: gaining name recognition. As two-career families cope with the tricky work-life balance, as Tide and Colgate and Trump and the Democrats and the Bachelor and Angry Birds vie for the attention of the electorate, the consumer, the viewer, or the user—all I want them to know is my name.

We tried very hard to achieve this, and I’m proud of everything we accomplished. We hit over 70,000 doors, 2,500 of which I personally knocked, made over 30,000 volunteer calls, recruited 200 volunteers, did decent in 7 debates, received some positive press coverage, earned coveted endorsements, and raised over $400,000. I retained abundant, perhaps Forrest Gump-ish, for sure youthful, optimism to the very end, while many around me remained skeptical though hopeful.

But neither diligence nor optimism wins elections. In low-information elections like City Council, name recognition is what makes the difference . And that’s what two researchers, Cindy Kam and Elizabeth Zechmeister, from Vanderbilt University have determined most sways a voter’s decision in local races. These researchers conclude that a voter perceiving high name recognition infer that the candidate is likely to win, and voters like to pick winners. But there is little opportunity to get name recognition in a local race from earned media, particularly when there is a November presidential campaign in which the fate of our nation, our security, and our future hangs in the balance. Our campaign received positive news coverage related to our sparring over Rick Caruso’s 333 S. La Cienega project, but it was a day or two of press, no more. Paid communications drive the competition for name recognition in local races, according to these Vanderbilt researchers. But a challenger never has the fundraising advantage incumbents have. Special interest groups with deep pockets like to go with the odds, and the odds favor incumbents. That’s the “incumbency doctrine.”

That is why the impacts of the Supreme Court’s disastrous Citizens United decision is worse in local races, not to mention the holding of its predecessor, Buckley v. Valeo, that SuperPACs are utterly immune from prohibitions. Citizens United leads voters to infer community support from high name recognition, when in fact it’s a single donor with a rich SuperPAC. For every dollar my campaign spent (subject to a $700 donation limit), my opponent and his supporters were prepared to spend at least double, with vast sums going through SuperPACs. While we needed 30 max-out donors to disseminate a single mail piece (30 x $700 = $21,000), it takes a single donor and his SuperPAC to do the same with one check. In my race, eight donors sent nineteen mailers and ran a whole field program for my opponent.

Even with all the money in the world, voter attention in local races is hard to grab, for three reasons. First, in this interconnected world with two-career families, voters are busy and distracted with their lives. I recall another Westside Village door on the penultimate night before Election Day. At the doorstep, I could hear a shouting couple, in a serious fight, struggling to hold their tenuous marriage together. While my election seemed so important to me and my diehard supporters, I knew it’d probably not be to them, at least not on that night. So I respectfully abstained. Second, my competition for voters’ attention is not just with my opponents. It’s with all the March campaigns—Yes on S, No on S, the school board race, Paul Koretz, Jesse Creed and beyond. As voters get drowned in political mailers, they begin to tune out, allowing stacks of political mail to collect dust on their front porch. Third, we had to compete with nonstop news of the alarming conduct of the new Trump administration. Six weeks into the Trump presidency, he had issued a patently unconstitutional Muslim ban, appointed a cabinet of climate-deniers and public school privatizers, and repealed key parts of Obama’s signature consumer protection law, Dodd-Frank.

The fact that low-information elections like City Council races boil down to a question of name recognition supports three campaign finance reforms. First, we need to overrule Citizens United and the constitutional immunity of independent expenditures. If name recognition is important to voters because it signals broad community support, Citizens United enables a single donor to mislead voters. But our options for reform are limited. With the Merrick Garland embargo and Donald Trump’s victory, we may sadly be stuck with a conservative Supreme Court for my lifetime, and constitutional amendments like the one Move to Amend is advocating for adoption may be even more difficult to enact.

Second, we need to establish a public financing system for local elections. We can arm candidates with resources commensurate with the person’s popularity. This idea is one that Councilmember Mike Bonin proposed in January, but it received virtually no traction. That’s not surprising. People in power got into power precisely because they benefited from a lopsided playing field.

Finally, with local races being consolidated with the November elections, it may be time to level the playing field between individual donation limits in local races and other races to give City Council candidates a fair opportunity to vie with state and federal races where limits range from $2,700 to $29,200 per person. Otherwise, expensive state races will drown out local elections. While I prefer reducing the state limits to match, say, the federal limit ($2,700), I hate to admit that it may be easier to level the playing field by raising the City Council limits.

We need to enact campaign finance reforms that reflect the unique nature of local races and strengthen the health of our local democracy.

Jesse Creed is an attorney and veterans’ advocate who is passionate about lawyering to empower communities who have been disenfranchised. He is Special Advisor to Vets Advocacy, the nonprofit created in connection with the landmark Valentini settlement agreement.