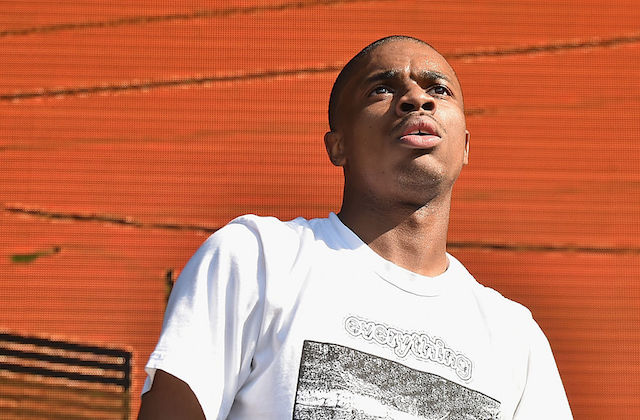 Vince Staples doesn’t care what anyone thinks about anything. The rapper is staunch about minding his own business and letting people live their own lives. “I’m annoyed by a lot of things,” he tells me over the phone. “But I think people should have the freedom to be themselves and think what they want.”

The truth, however, is that the 23-year old rapper cares so much. He cares about the black and brown bodies being gunned down by the police, about young black men who are sent to jail for life during their teenage years. Staples isn’t putting out music to glorify the gangster experience; his discography is in opposition of that, a vivid salvo of the reality of being a black man in America. He says it best himself on his standout track “Norf Norf” from his 2015 breakthrough album Summertime ‘06. “I’m a gangsta Crip," he spits over a chilling bassline. "F—k gangsta rap."

A sense of duality has come to be expected of Staples, who deviates from the trajectory of what we’ve come to expect from his hip-hop contemporaries. He’s humble about his newly acquired wealth and success, shying away from the label of a star. “It’s a job and I appreciate it,” he explains. “I think it’s harder to smell your own poop than to be realistic. I focus on the easy part of it which is being realistic and taking it day-by-day. I would never want to lie to myself or have the people who work with me lie to me. We know who we are, we know where we have to go.”

At the time of our conversation, he’s winding down his tour behind his blistering 2016 EP Prima Donna. I ask Staples if he’s a Wes Anderson fan—his tour is titled "The Life Aquatic Tour," after the 2004 film. “Corey [my manager] told me I needed to name the tour and I was like, ‘Alright. Call it The Life Aquatic Tour.’ He laughed but I just did it. I’ve actually never seen any of his movies besides Fantastic Mr. Fox. I love George Clooney," says Staples.

Staples’ irreverence is unshakable and it’s garnered him a reputation as comic relief, thanks in part to the quick wit and commentary that gets displayed on his Twitter. “I don’t get it, but whatever,” he tells me, but I find this comment hard to believe, especially when he begins a brief, playful riff on Anderson. "He looks like a psycho, like he kills people kind of,” comments Staples as he scrolls through photographs of the director on Google Images. “If he was in a movie, he would be a serial killer.” Staples muses that Anderson should cast himself in a movie before segueing into the director’s hair, which looks eerily the same in every photograph. “It never alters,” he says. “I respect that.”

On your latest single 'BagBak' from your forthcoming album, you mention 'balancing' chakras. I couldn’t help but wonder if that has been a sort of cautionary hazard of moving downtown [Staples moved from Long Beach to a downtown L.A. loft in 2016]?

That s—t is so funny to me. I don’t know what any of that stuff means. I know a lot of people who are into that sort of thing. It sounds cute though.

How much of your outside life is changing the music you’re making?

I think it definitely has an effect, but I’m just not sure what it is specifically. Every time something changes in life, it changes your whole world perspective. Whether it’s your house, the street you live on, the furniture in your house, your car, whatever clothes you’re wearing, who you’re hanging out with...all these things change your perspective. Just in the simplest way you’re seeing different things. We try to focus so much on looking within ourselves before creating music because that way it’s easier to bear the burden of creating something new. Every time we make something, we want it to be something that’s never been made before. We have no fear of failure, I think we try to be more introspective with our creation. But with that being said, there’s no way possible that you can avoid the outside influence of day-to-day life, especially with how you live.

Would you consider it a positive shift?

I think every shift is positive because it’s reality. It doesn’t matter if it puts you in a better place or a worse place, as long as you chronicle that in a very truthful way. Putting your own feelings like embarrassment or self-consciousness aside and chronicling it for your own consumption, I feel like you’ll be fine.

It seems like all change for you is inevitably positive.

You have to accept it. By accepting it, you get to learn that this kind of life, or this platform, none of it belongs to you. It’s all a new experience that we’re going through with one another. You add that into your art, people can see themselves within it, and accept it. It helps them more, they can learn to love it more no matter what it does.

What does it feel like when you’re performing and so much of your audience is white?

I don’t know whose show doesn’t look like that for the most part. I haven’t been to one. It doesn’t bother me. Those tickets are expensive.

You often talk about how you want to be a ‘normal’ guy. How do you balance that as your fame continues to grow?

I don’t think I have to honestly. Maybe one day I will, but for now I’m fine. That’s all bulls—t, anyway. It’s all stuff people make up to make themselves feel more special, you know? No one’s Michael Jackson at this point in their life. You’ll be fine, you’re not getting chased through the mall. Unless you’re a young Justin Bieber. I’ll be fine. It’s based on how you live your personal life and how you go about it and how you feel about creation. You can avoid all of those things.

You’re not motivated by money or fame or most of the things that are associated with rap and hip-hop. What does success mean to you personally?

I think a lot of times people do and say things because they think it’s going to work. They want to be heard. They put certain parts of what’s been successful before into their music, which is fine. I don’t see a problem with that, it’s not my personal preference. I think for me I want my art to stand on its own. I want to be an artist more than a musician in the sense of what my music signifies. The money doesn’t, the fame doesn’t matter. The character and craftsmanship behind what you create, that’s what matters. That’s where I want my music to exist. And that keeps me from even having to think about those other things.

Catch Vince Staples and Kilo Kish on The Life Aquatic Tour in Los Angeles on April 11 and 12 at the Fonda Theatre. Find tickets here.